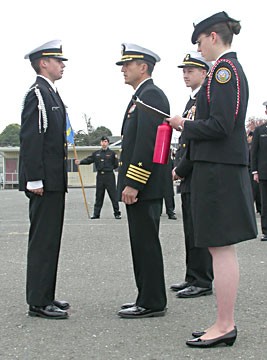 To drivers passing Eureka High's parking lot Monday morning, it must have looked like an official military drill: two battalions standing in perfect formation, looking sharp in their Navy blues. But up close you could see these were not hardened soldiers; they were high school students enrolled in the Navy Junior Reserve Officers Training Corps (NJROTC). Some were still baby-faced freshmen, standing at nervous attention for their annual military inspection.

Retired Navy Captain Dan Wenceslao, who had traveled from his office in Marysville, Wash., to pass judgment, stood in front of one wide-eyed cadet. He lifted one corner of the young man's collar, checked his name tag and the length of his tie, then leaned behind him to inspect his haircut. Facing the cadet again, Capt. Wenceslao asked quietly, "Who's the Secretary of Defense?"

Eureka High's NJROTC program, like ROTC programs nationwide, is sponsored by the United States Armed Forces. Students sign up for it, just as they would for wood shop or any other elective. They learn about naval history and military traditions. They learn how to march in formation, how to shoot air rifles and how to find checkpoints with a map and compass. And once a year, they get to go on a military orientation trip. Last year, that meant a trip to Hawaii.

"It's a fun class," said the tank-like instructor, Sgt. Darrin Smith, whose son, Darrin, Jr., is one of the cadets. Smith teaches five classes per day, including two introductory courses for freshmen, Naval Science 2 and 3, and a leadership course for seniors. Half his salary is paid by the Navy while the other half comes from Eureka City Schools.

"The school gets an elective teacher for half price," Smith said.

Some citizens -- both locally and nationally -- have expressed concerns about the JROTC, alleging that it's little more than an elaborate recruitment tool. Smith said that's not the case. "It's basically a course to teach citizenship and leadership," he said. Students get credit for taking a military history course. They can earn college scholarships and frequently participate in community service.

Currently, 70 students are enrolled in Eureka High's NJROTC, and if the current trend continues, very few of them will end up in the military. "I've been here three years," Smith said, "and I can count on one hand the number of cadets who have enlisted."

Eureka resident Bonnie Mantel stood near the chain link fence that surrounds the parking lot and held up her camera, snapping shots of her son, Jacob, a freshman. She was apprehensive when he first told her he wanted to enroll in the program but said she's now happy he did.

"Overall, to succeed in school, it's important to be part of something," Mantel said. "Whether it's band or sports or this, students do better when they're involved in a group."

A recent Marine Corps boot camp grad -- and Eureka High alum -- also was on hand Monday, working as an assistant to the local recruiter. Should Measure J pass next Tuesday, this freshly minted Marine would not be allowed to recruit any student under 18, nor would any other military personnel. (An identical measure, Measure F, is on the ballot in Arcata.)

"I don't think they should [pass] that," Mantel said. "As much as I don't like wars, there needs to be a military. And kids can choose. That's what this country's about, is choice."

Capt. Wenceslao carefully watched the cadets' formation as they marched, chanting "Left! Left! Left, right, left!" He quizzed the officers on the chain of command and on the 11 orders of the sentry. He inspected uniforms, posture and appearance. When the inspection was complete, cadets were ordered to fall out. They gathered around Sgt. Smith and Capt. Wenceslao, who told them to keep working hard and to study.

The inspection ended in time for cadets to make it to third period. As they fell out of formation, Public Affairs Officer Elise Joanne Brunette, a junior, said they could have performed better. "Most of the guys will need haircuts," she said. "We'll get docked on that. And on the knowledge as well."

As the students walked back toward the school, they seemed to shake off the test, relieved to be finished. Chatting and laughing, they looked just like any other group of teenagers, except for those snappy uniforms.