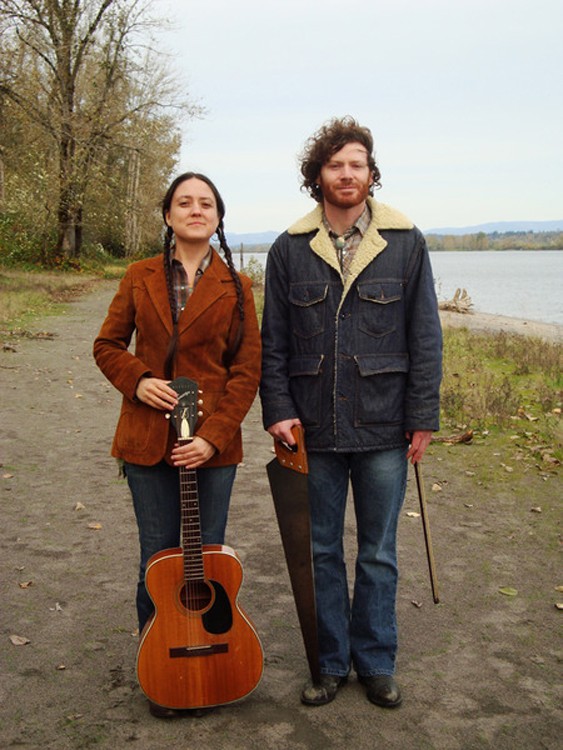 Portland-based guitarist/songwriter Miss Lana Rebel is bucking the trend: She's leaving PDX, heading for warmer climes, the Southwest, where she's from. The former bassist for the hard-rocking Last of the Juanitas got into country music with Juanita Family and Friends. When that band disbanded she stuck in the country-tonk vein playing in The Love Lasers and also recorded an album, Mistakes We Can Live With, with her slightly less raucous band, The Broken Promises.

"The Broken Promises is more my originals, more dreamy and quiet, sleepier," she said, calling from Portland just before leaving town. "I love country music, been a fan of Willie Nelson since I was five. I didn't grow up on a farm or anything; I grew up in Tucson leading a pretty normal life. I got into country later in life with some friends. We liked sitting around after hours singing together and learning old Johnny Cash songs, learning to harmonize, just having fun. After a while I figured I could write my own songs. I found that fulfilling so I kept on with it."

She's not exactly traditional, but sticks to the classic country themes. "They're pretty consistent, you know -- heartbreak, drinking, partying, being poor, mostly heartbreak -- things that come up in life that are confusing. You try to get through your trials and tribulations thoughtfully and you sing about it. In that sense it's traditional, but I'm not trying to steal from old country songs, I try to make it personal."

Now Miss Lana and BP bandmate Kevin Mayfield (guitar, saw, harmonica) have packed up a big yellow school bus with all their belongings (along with a drummer and stand-up bassist) and are on their way south, stopping in Arcata for a couple of shows on Saturday: Around 6, they'll be at Missing Link Records for the first instore at their new location on H St. The band plays later (much later) at the Alibi with Brackish, a new country-punk duo from Loleta with members of Side Iron and Dragged by Horses.

You know that "blunk" sound that announces a Facebook chat? I heard it late Monday night -- it was Bump Foundation founder/guitarist Greg Camphuis letting me know about a show at the Jambalaya Friday. As Greg explained, it's an expanded Bump "with Leah Crenshaw on vocals, myself, Fuzz Berhardt, Isaac Williams, Tommy Fitzmaurice, Aber Miller and special guests Madi Simmons and Easton Stuard. Should be fun..." DJ Rickshaw opens.

Arcata's hottest gypsy jazz picker Tom Toohey gathers with friends from the Bay Area to celebrate Django Reinhardt's 101st birthday Saturday with an evening of Hot Club-style jazz at Westhaven Center for the Arts. (It's actually a little early since Django was born Jan. 23, 1910.)

The moon might be a fingernail crescent, but the local Tom Petty tribute, Full Moon Fever is in full effect: Friday they play the Blue Lake Casino, Saturday they're breaking hearts at Cher-Ae Heights. Yes, I believe it's music that will fit into the casino atmosphere.

It's a pretty good week for hip hop starting with a That's How We Roll show Thursday at the Red Fox with Brooklyn-born MC Talib Kweli, who began his career in the '90s working with Mos Def in the legendary Black Star. While he may not have hit the commercial heights of some from his generation, Talib was always been a critics' fave -- and a rappers' rapper. As Jay-Z put it in rhyme, "If skills sold, truth be told, I'd probably be -- lyrically -- Talib Kweli." Still going strong, Talib drops a new disc, Gutter Rainbows, later this month. Expect a big year for him as he and Mos reunite Black Star for the Paid Dues 2011 tour. Also on the Fox bill: Portland MC/producer My G of Indamix Records with Rose, DJ Jsun from Deep Grove Society and Russian-born rapper Ivan Ives.

Levi's High Art Productions is back in action Saturday with a cool hip hop show at Nocturnum. The Rappin' In the Mirror Tour features a mess of Bay Area vets, Z-Man, who some will remember from the shows he did locally with Thanksgiving Brown back in the day, plus Equipto from S.F. who records for Solidarity Records ("the People's label") Boac, Mike Marshall from Timex Social Club and The Luniz, DJ Quest and local up-and-comers The Kontenders.

Fiddle fans can get their fill Sunday at the Bayside Grange as Kevin Carr spends a full day fiddling about. It starts around 11 (in the morning) with a fiddle workshop (Irish, old time, Galician, Quebecois). That's followed by an afternoon concert aimed at families: "Stories from the Musical Realms: Concerning Inspiration and the Music between the Notes." The day closes with a Barn Dance featuring The Family Carr (Kevin with his wife Josie Mendelsohn and David Carr, presumably also kin) with Mike Mulderig calling contras, squares and social dances.

Fingerstyle guitar abounds in the coming weeks. First there's Jameson Swanagon, a self-described "composer tied to the guitar" from the Bay Area playing Saturday at Mosgo's. Tuesday, Jan. 11, the totally amazing British fingerstyle guitar player Adrian Legg makes his first visit to the Arcata Playhouse. After working for years on the tech aspect of guitars (he wrote a book called Customising Your Electric Guitar) Legg came to the fore in the '90s playing alongside guys like Richard Thompson, David Lindley, Joe Satriani, Steve Vai and Eric Johnson (who is coming to HSU next week with two more fingerstylers). Today Legg picks torrents of notes on custom hybrid electric/acoustic space guitars creating a sound like no other. He's on tour with young Brooks Robertson from Eugene, a disciple of the late Buster B. Jones and yet another hot picker.

That same Tuesday at Humboldt Brews The Infamous Stringdusters offer a different sort of picking, bluegrass-style. The top-flight crew out of Nashville has been doing well working that edge between the bluegrass and jamband scenes and it's paying off: They're up for a Grammy for "Best Country Instrumental Performance" for the tune "Magic #9" from Things That Fly, their third release on Sugar Hill Records. The Bucky Walters open.

KHUM celebrates 15 years of "Radio w/o the Rules" with a party Friday at the ATL featuring Yogoman Burning Band, The Delta Nats and a "mystery band" (see our Calendar for more details). Then on Saturday they toast the debut of the KHUM/KEET collaboration, Lost Coast Sessions. The local music TV show kicks off with a half hour of fine picking and singing by Absynth Quintet starting at 8:30 p.m. right before Austin City Limits.

In this age of computerized phone systems, we all spend more time than we'd like on hold, usually listening to really crappy music. The County of Humboldt is changing that, at least on their phone system. As Supervisor Clif Clendenen explained in an email exchange, "We used 'Old Plank Road' from Huckleberry Flint [next up on Lost Coast Sessions] for a few months as the County hold music to have local music replace the canned crap from the phone company."

Now Karen Clower, program coordinator for the County Administrative Office, is seeking more local band contributions. Interested? Check in online at co.humboldt.ca.us, click on "Attention Local Bands and Musicians" and download the PDF, or better yet, check the Journal Blogthing where we'll provide more details. BTW, if you've been on hold with the Journal, you were listening to really cool music by Cloaks, featuring my favorite musician ever, Spencer Doran. (Yes, I'm prejudiced.)