Recreational weed wins in Colorado and Washington. How will it affect us? 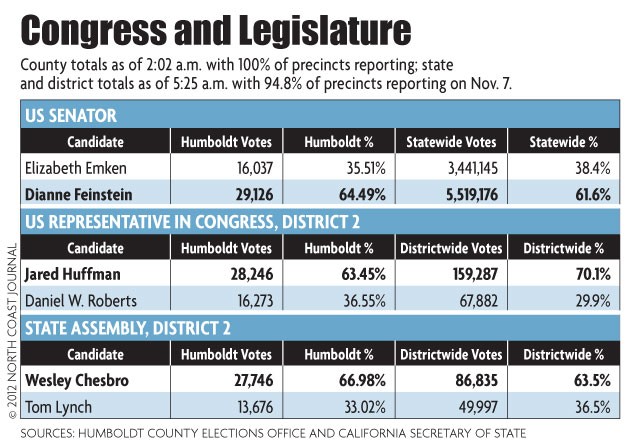 Did you feel that, Humboldt County? The ground just shifted. Two big jolts, one three states to our east and another two states to our north, just sent our major cash crop cascading over the tipping point.

As you read this, marijuana buds are tumbling out of the shadows of the black market toward state-licensed retail outlets in Colorado and Washington, where on Election Day voters approved measures to legalize marijuana production, sales and possession of limited amounts for people over 21. Not just for medicinal purposes, either. People can consume it even if they don't have headaches or insomnia. Barring swift and nasty federal intervention, we're about to see the first government-regulated commercial marijuana markets in the industrialized world.

"This is a huge, huge political moment," said Oakland attorney James Anthony. "It's very exciting, and it's going to have broad implications for the war on drugs generally and certainly for medical marijuana issues."

Like most wars, the crusade against marijuana is not likely to end quickly or cleanly. The federal government still considers cannabis a Schedule One controlled substance, a drug worse than cocaine or methamphetamine, with no recognized medicinal use. Federal agents have raided and shut down hundreds of medical marijuana dispensaries in California, and the U.S. Department of Justice has even gone so far as to threaten prosecution and imprisonment for state and local officials who license dispensaries.

An email to the U.S. Department of Justice last week was not returned by press time. Spokespeople for the department have steadfastly refused to comment, telling media outlets only that Attorney General Eric Holder won't speculate on the ballot initiatives. This despite pressure from some of the nation's top law enforcement officials to condemn the measures publicly.

Pundits have speculated that full legalization at the state level will trigger a constitutional showdown, but Anthony believes that the feds no longer have the political capital or the manpower to enforce prohibition against the voters' will.

(An Oregon legalization measure failed on Election Day, but few are willing to draw any conclusions from that one, because it was widely criticized as being poorly written.)

In the meantime, Humboldt County residents are left wondering what this means for our local marijuana industry, which has been valued in excess of $2 billion annually.

Medical marijuana makes up a tiny fraction of that amount, but local industry advocates hope that this week's votes in Washington and Colorado will give California legislators firmer ground to stand on. Kristin Nevedal is chair of the Emerald Growers Association, a coalition of medical marijuana advocates in Humboldt and Mendocino counties promoting sustainably grown outdoor cannabis. Frustrated by California's county-by-county patchwork approach to regulating the industry, Nevedal is now optimistic that statewide regulation will be politically viable.

"I suspect legalization [elsewhere] will create a little more of a safe-feeling political environment for our state's legislators," she said. Dispensaries in Colorado have sprouted like, well, weeds, with more than 200 of them in Denver alone. But federal agents have largely left those operations alone while cracking down on dispensaries in California. Nevedal believes that's because Colorado, unlike California, has a comprehensive statewide regulatory system. Earlier this year in Californa, state Assemblyman Tom Ammiano (D-San Francisco) withdrew a bill that aimed to establish such a system after it was scoffed at and burdened with amendments.

Nevedal also hopes that bringing the industry into the sunshine will help educate people about the superiority of sustainable outdoor cultivation. "Patients have not had the opportunity to be really well educated because we're in a prohibition era," she said. The federal government forbids laboratory studies of marijuana, and so the Food and Drug Administration hasn't tested the plant's tolerance levels for pesticides, fungicides and additives like nitrogen and phosphorous.

But what about the other side of the industry, the black market? Professor Beth Wilson, the chair of HSU's economics department, said it's impossible to know for sure what the impacts will be, but certain economic principles could help with an educated guess. "I think that our market is, well, certainly national," she said. "I grew up in Chicago and I remember people having Humboldt pot."

Like any export product, weed is subject to the law of supply and demand. If legalization serves to boost production in Washington and Colorado, as analysts have predicted it will, Wilson said she would expect to see marijuana prices drop nationwide. This would be bad news for locals making their living from pot, but it would also disrupt drug cartels.

A study released last week by a respected Mexican think tank estimated that legalization in any U.S. state would cut Mexican drug cartels' earnings in the U.S. by as much as 30 percent, according to the Washington Post. The study theorized that a state with legal weed could become a major producer for the nation, growing quality marijuana on the cheap and supplying illicit flows to other states.

If competition expands, Humboldt County growers could be in trouble. Our county has good name recognition and an established support industry, Wilson said, but "I don't believe that we have any advantage in terms of our soil or things that can't be moved -- our terroir, if you will."

Such market-based concerns are beside the point for Ellen Komp, deputy director of California's branch of the National Organization for the Reform of Marijuana Laws (NORML). During the nonprofit's 40-year history, politicians have consistently argued that the public isn't ready for legalization. Now, Komp said, "Those arguments are out the window."

Anthony, the Oakland attorney, expects a domino effect. "It's the beginning of the end for the black market," he said. "I think that we'll see the California Legislature take some kind of statewide action to regulate and clarify medical marijuana. Not to mention there will be a huge push, both in the legislature and by initiative, to pursue adult-use legalization either in 2014 or 2016."