Legend of the Falls 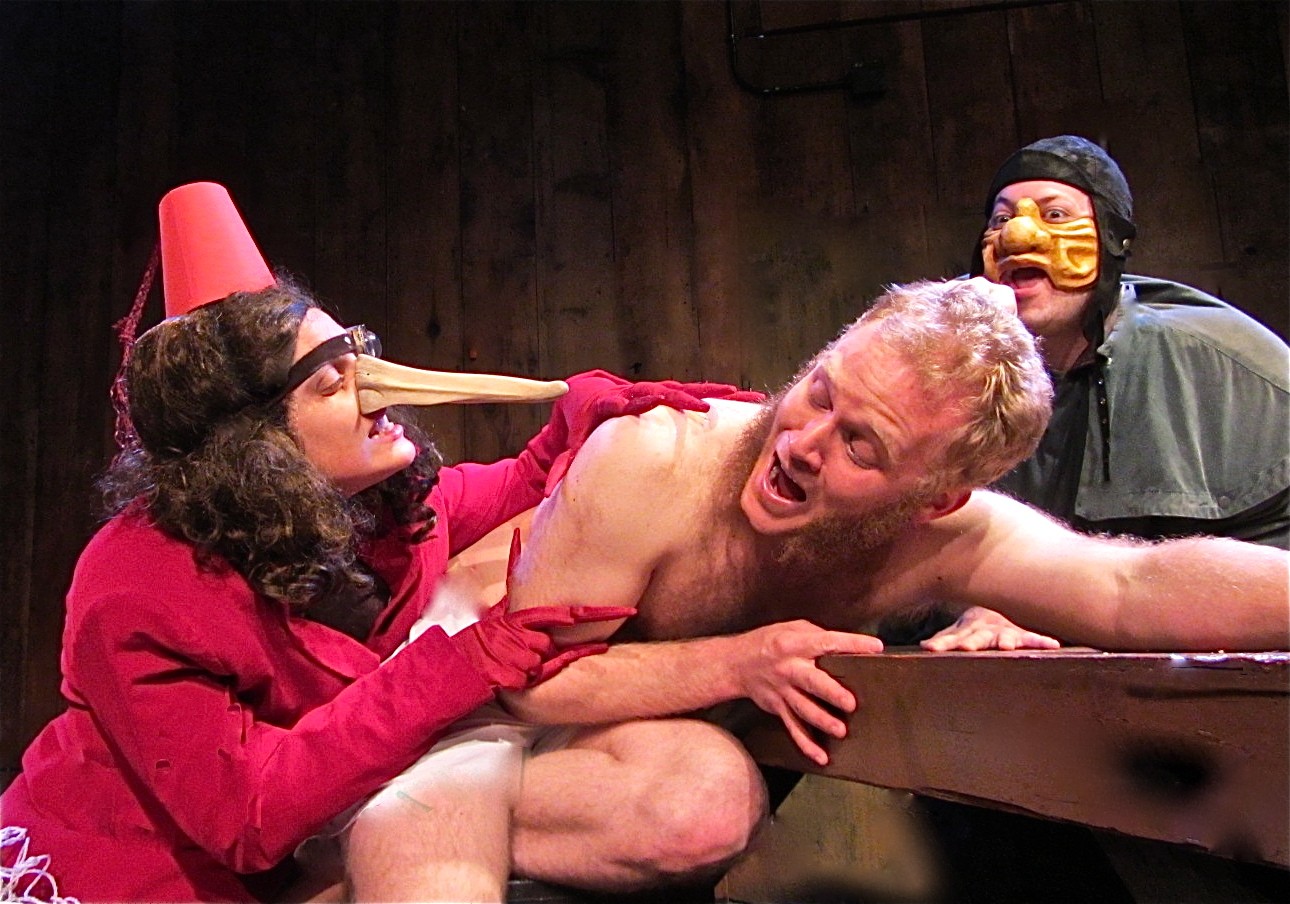 I remember my mother standing at an ironing board in the motel room where our family was staying on a vacation trip in the summer of 1960, as we heard the radio report of what came to be called "the miracle at Niagara": a 7-year-old boy had been swept over the titanic Horseshoe Falls and survived. He was picked up at the bottom by the tourist boat, "Maid of the Mist." We had visited the Falls just hours before it happened. It was a wonder just hearing about it.

The first person to intentionally go over those falls and survive was Annie Edson Taylor, a down-on-her-luck teacher who said she was 43, but was actually 63.

She did it in a specially built barrel in 1901. Her story is the basis of one of the two original pieces on the Carlo Theatre stage at Dell'Arte for its second and final weekend, under the umbrella title of Beyond Belief. They are the thesis projects of third-year students in the MFA program at the Dell'Arte International School.

The story of this remarkable woman is preceded by The Most Remarkable Man of the Age, although he's fictional. MFA candidate Myque Franz adapted an Edgar Allen Poe story ("The Man That Was Used Up") and poem ("The Conqueror Worm"), and created this piece with three former Dell'Arte students: Eric Hoffman, Zita Nyarady and Brandon J. Wilson.

It has the satiric mood of the Poe story but owes as least as much to his macabre side, as well as perhaps to melodrama, morality tales, German Expressionism and those beloved (by some) cheap horror flicks. An Everyman named Thompson seeks the secret of the rumored immortality of the elusive figure, Gen. Dr. John A.B.C. Smith, PhD. Thompson meets various bizarre characters (Pompeygirl, Dr. Guru Stretchmout, the Cognoscenti Twins, Sinivate the Worm etc.) before learning the secret the hard way, in a kind of Alfred Hitchcock Presents twist.

At least that's what happened when I saw it. The nature of these projects is that they change, especially from one weekend to the next. It was an entertaining and skillfully presented piece, with all the expected physical flourishes on, behind and even under the stage. It managed to incorporate a variation on the Actor's Nightmare: finding yourself onstage -- maybe in your underwear -- with no idea of what the play is, or the words of your next line. This helped give this entire piece the quality of a nightmare.

Heroine of Horseshoe Falls is the work of the three third-year participants: Rachel Brown, Meghan Frank and Pratik Motwani. It follows the general biography of Annie Edson Taylor, though it shapes it for affecting and artful effect. But it also adds much texture and detail. It begins with a striking theatrical image, which I won't spoil except to say that it, like some other images, postures and dance movements, reminded me of photos and films of Agnes de Mille's early work.

When Taylor's husband is killed in the Civil War she is left to her own devices. After her wanderings and struggles as a teacher, she gets the idea of plunging down the Horseshoe Falls to make her fortune. The real Annie Taylor's desperation seems softened by a delusion well-known in our time, of self-affirmation and immortality through a famous accomplishment.

Pratik Motwani (who rocketed to local stardom in last year's Mary Jane: The Musical -- and yes, he's back this summer!) plays her carney-eyed manager who siphons off what little money she makes. He sees Annie as a freak attraction, while she sees herself as an inspiring story. Meghan Frank, who is excellent as Annie throughout, is especially riveting as her elder self: the former "Queen of the Mist" selling penny postcards memorializing her exploits. Her rueful sweetness in defeat feels true. Meghan Frank is an actor with range.

Rachel Brown plays the "inner Annie" and a half-dozen other parts with efficiency and charm. Spoken exposition got confusing at times, but some of the writing was especially evocative: the remembered scene of Annie getting the news of her husband's death, for instance. There were bursts of comedy, as in the old "Niagara Falls! Slowly I turn ..." bit I first saw in a Three Stooges film -- barely integrated but fun.

Michael Foster designed lighting and Lydia Foreman the costumes. Daniel Spencer is technical director and Kristin Shumaker the production stage manager -- all for both shows. The lighting for each was especially effective in setting the mood from the start. Beyond Belief continues this weekend at Dell'Arte in Blue Lake, Thursday, Friday and Saturday at 8 p.m.

Coming Up: North Coast Repertory Theatre opens the 2003 Broadway musical Avenue Q on May 24. It runs through June 23.