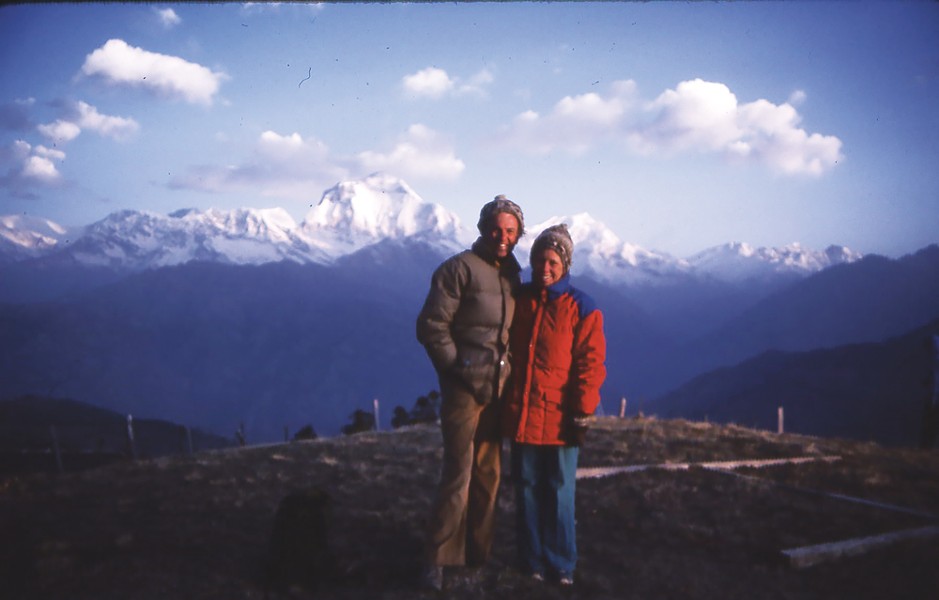 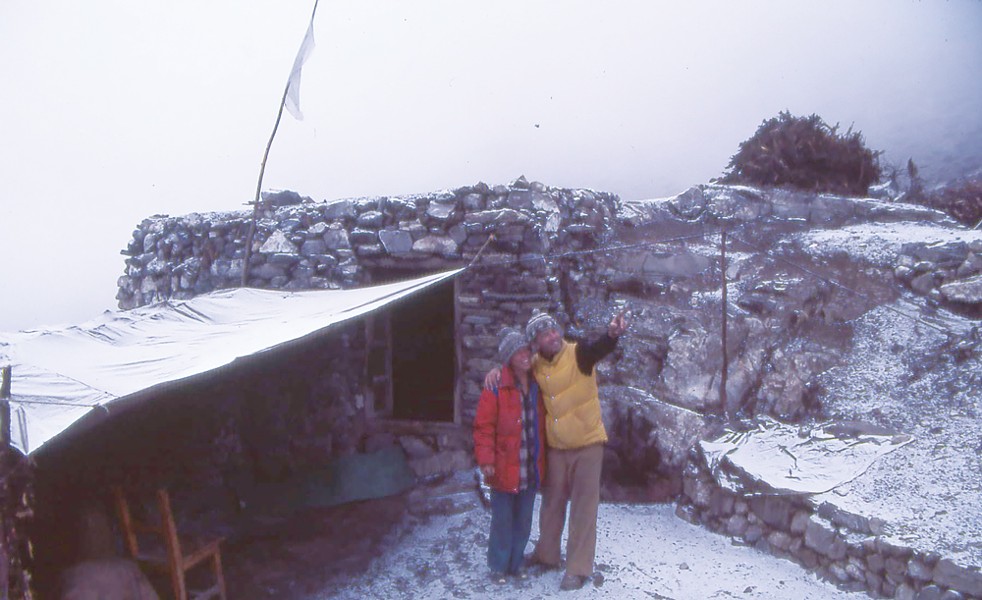 Courtesy of Louisa Rogers Louisa Rogers and her husband, Barry Evans, in the Himalayas, outside the teahouse hut where they stayed below Thorong La.

The worst lentils I ever ate were the ones I appreciated the most.

In the early '80s, my husband, Barry, and I joined hundreds of other North Americans and Europeans and went trekking in the Himalayas. We chose to walk the three-week Muktinath Pilgrimage trail, a windy, mountainous route along the Kali Gandaki gorge, the deepest in the world, beneath the towering Annapurna and Dhaulagiri peaks. Ultimately, we hoped to climb Thorong La, a difficult,, snow-covered pass at almost 17,800 feet, and then hike down the other side, making a satisfying loop.

I assumed trekking would be like the backpacking we did every summer in the North Cascades. But it was really backpacking lite because we were housed and fed by locals, and so we carried no mats, sleeping bags, cooking stove or food.

Along with not schlepping much, eating was one of the unexpected pleasures of trekking. Our Nepali hosts had cannily figured out how to appeal to Western tastes, ordering delicious stir-fries, omelets and even cheesecake. Looking back, I wish I had tried to educate myself better on the Nepali and Tibetan food cultures, like the woman from Quebec at our guesthouse in Goropani, who asked the women in the kitchen if she could watch while they cooked their family's meal one afternoon. But I wasn't that kind of traveler back then.

After 10 strenuous but beautiful days, we arrived in the village of Muktinath one afternoon and found a guesthouse, where a hiker who had just descended Thorong La lay on his bed, a towel over his eyes, moaning. That was my first exposure to snow blindness.

A day later, after adjusting to the elevation, we hiked an hour to a teahouse, the last dwelling before climbing the pass. The sole occupant was a squat, leathery-skinned woman of indeterminate age.

I looked forward to dinner, assuming we'd have dal, a beloved dish of lentils, the poor person's fare the world over. Unfortunately the teahouse dal was more broth than lentils, with a couple of meager potatoes thrown in. It was hardly enough for a serious uphill climb the next morning, but we ate with gusto and settled down on thin straw mats to get a good night's sleep before an early morning departure.

About 4:30 a.m., I woke up, to find Barry had the most excruciating headache in his life, caused by the 14,000-foot elevation. We decided to wait awhile to see if it would fade. An hour later, when it began to snow, we knew it was game over, having heard horror stories of hikers getting lost on the pass in snowstorms. With fresh snow, the boot prints from earlier hikers would be covered and there'd be no visible trail.

To be honest, it was a relief. Barry's headache, while subsiding, meant he had no business climbing another 4,000 feet. After a breakfast of more watery dal, we descended in intensifying snow, our goal to hike as far as possible. We trudged for three hours, finally holing up in the village of Marpha.

For three days we huddled in a chilly guesthouse with no other trekkers, passing the long empty hours poring over a Newsweek, so happy to have something to read that we didn't notice it was a year old. On the fourth day, too cooped up to stay any longer, we stumbled across a snow field for two hours in low visibility to the next village, where we were greeted by a gaggle of German trekkers, a cozy fire and apple pie. Later, we learned the snowstorm was one of the biggest blizzards in years.

The teahouse dal is not a recipe I'd recommend but it did remind me that lentils are a great leveler — a worthy,protein-rich meal for anyone of any economic means. No one can argue with how good a hot bowl of simple lentil soup can taste, even if it's watery and thin.

I actually prefer cooking the vegetables separately from the lentils and adding them at the end, most people combine them earlier to meld the flavors, as in the following. Serves 4.

Broth or water to cover barley and lentils (more if needed), about 4 cups

A few chunks of frozen spinach or other greens

Salt and pepper to taste

In a large pot, bring the water or broth to a boil. Add the barley and simmer for about 10 minutes.

In a separate pot, sauté the garlic and onion, and cook over medium heat, stirring often, until softened, about 5 minutes.

Add sautéed vegetables and lentils to the barley. Bring the mixture to a boil, then partially cover the pot and reduce the heat to maintain a gentle simmer. Cook for about 30 minutes, or until the lentils are tender but not mushy.

When checking the lentils for doneness, season with salt and pepper. Add cilantro for garnish and serve.

Louisa Rogers (she/her) is a leadership coach and writer who lives in Eureka and Guanajuato, Mexico