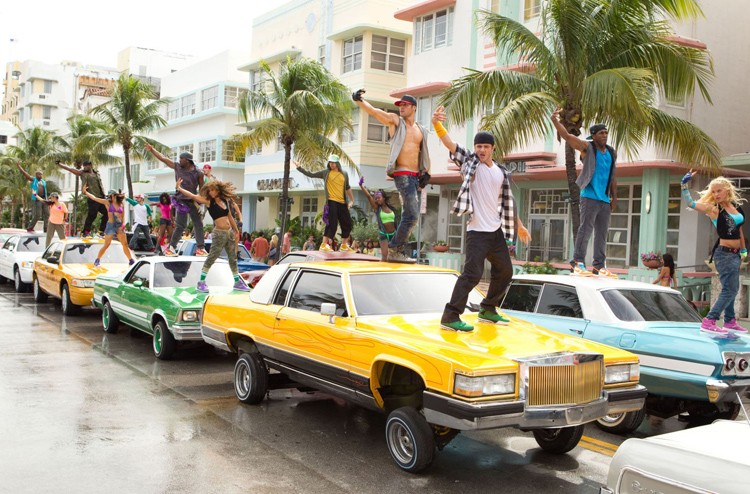 STEP UP REVOLUTION. As a long-form dance video, this is good stuff: breakneck choreography, clever cinematography, beautiful people in various states of undress -- it nails all the steps. As a proper movie? Not so much. This is my first experience with the Step Up franchise, and I got basically what I was expecting. We open in Miami, where a candy-colored traffic jam erupts into a pulsating flash mob rave-up. The dub-step soundtrack grinds and throbs, the camera whips all over the place, and the dancers gyrate and ghost-ride the whip. The opening makes for riveting entertainment but sets a standard to which the subsequent 90 minutes can't measure up.

The dance sequences are strung together with a paper-thin premise about a greedy developer (Peter Gallagher, cruel eyebrows fully deployed) who plans to bulldoze "the old neighborhood" and erect a luxury hotel complex. His daughter, a would-be professional dancer, falls in with the flash mob from the opening (they call themselves The Mob). She conceals her parentage from her new friends, which leads to an inevitable, predictable conflict. And, oh yeah, The Mob starts using dance as a tool for social change. Occupy South Beach, set to club music. There's a YouTube cash prize somewhere in the offing, too. Not that it really matters.

The narrative doesn't hold up to even glancing scrutiny, and the cast members are generally better dancers than actors. Which is fine, as long as they're dancing, but when called upon to move the story forward with dialogue, the sexiness and excitement they previously summoned all but disappear. It's a shame, because Revolution contains some genuinely inventive, visually spectacular sequences. But the hackneyed plot and artless performances are distracting enough to mar the whole experience. PG13. 99m.

THE WATCH. Perhaps even more disappointing is the newest entry from Lonely Island cohort and Hot Rod director Akiva Schaffer. At first, the prospect of a buddy sci-fi actioner with this cast (Richard Ayoade, Jonah Hill, Ben Stiller and Vince Vaughn) seemed like an easy win. To me it suggested some of the great cross-genre comedies of the 1980s. But it becomes clear early on that the laughs will be devastatingly few and far between.

Evan (Stiller) is a neurotic everyman Costco manager. A low-grade neighborhood tyrant, he forms clubs and organizations to lord over in lieu of forging real friendships. When Costco's night watchman is brutally slain, Evan forms a neighborhood watch. He only manages to attract three members: a gregarious buffoon (Vaughn), an icy misfit with authority issues (Hill) and a British weirdo (Ayoade).

They go through a series of interpersonal conflicts, fight the aliens and discover the true meaning of friendship. It's all pretty boilerplate, which could be fine: Some truly funny comedy has come from well-worn premises. But there isn't enough funny here to make an impact. There are occasional laughs when Vaughn and Hill start improvising, and Ayoade steals scenes with his usual expert timing.

Rather than The Watch, where he's the brightest spot, I would invite the uninitiated to explore Ayoade's back catalog. He's been terrifically funny on BBC comedies for years (The IT Crowd, The Mighty Boosh and Garth Merengi's Dark Place are particular standouts), and his directorial debut, 2010's Submarine, is a small, honest and funny movie about adolescence. R. 101m.

TOTAL RECALL. Yeah, I totally recall this movie starring Arnold Schwarzenegger, am I right? This remake of the 1990 sci-fi cult classic replaces Ah-nuld with Colin Farrell but (we're told) retains the all-important tri-boobed woman. And like the original, it's based on a mind-bending short story by Philip K. Dick. PG13. 121m.

DIARY OF A WIMPY KID: DOG DAYS. Based on the bestselling series of children's books by Jeff Kinney, this movie franchise plumbs the fertile depths of pre-teen life, with its bullies and girls and embarrassing mishaps. PG. 93m.

YOUR SISTER'S SISTER. This indie dramedy stars Mark Duplass as a man mourning his brother's death. His bestie (Emily Blunt) suggests he head to her family's cabin, where he unexpectedly runs into her sister. Add alcohol and cue complications. R. 90m.

Oh, wow. Thursday is a special day at the Arcata Theatre Lounge. Not only is it Ocean Night, a benefit for local nonprofits, but they're showing Point Break (1991). "Little hand says it's time to rock and roll." In the pantheon of action-packed bank-robbing surfer bromances, this is the best of the best. Starring Patrick Swayze, Keanu Reeves and the maniacal Gary Busey, this classic cheese-a-thon will be a hard act to follow, but The Significance of Salmon, a 12-minute documentary, has local relevance on its side. Doors open at 6:30 p.m. Three days later, Sunday's family feature will be The Indian in the Cupboard (1995), based on the children's book of the same name. 6 p.m.