Lessons from The Devil Makes Three

'Life will fuck you up anyway' 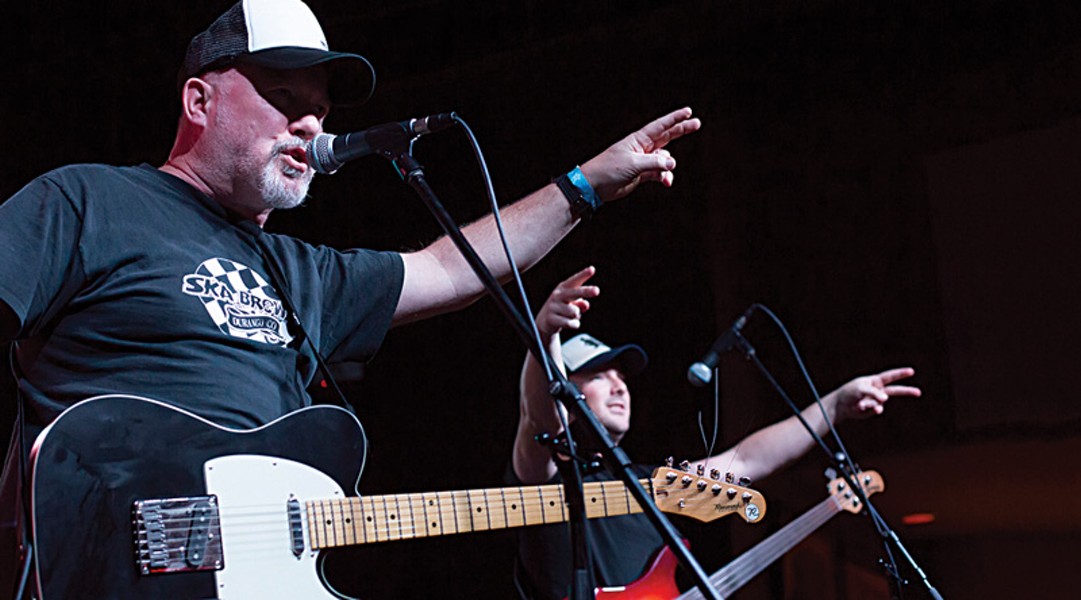 When The Devil Makes Three first played in Humboldt County a decade ago, not many bands were doing what it did. We had our string bands, sure, both bluegrass and old-timey, and we had a bit of a punk scene, but the line between, say, the Humboldt Folklife Society and The Placebo was distinct. The night The Devil Makes Three took the stage at what was then Muddy Waters (currently Northtown Coffee), the band not only erased that line, but blew it to bits. DM3's raw energy, biting humor and willingness to bleed and sweat brought an edge to a scene that theretofore lacked surprise. The band's eponymous first album was a collection of ripping ragtime anthems and, several albums later, DM3 continues to evolve the mountain-music-meets-garage-rock sound it does so well.

The band's latest effort, I'm a Stranger Here, was recorded at Dan Auerbach's (Black Keys) Easy Eye Sound Studio in Nashville. Reviews refer to the newest album as "darker" than DM3's earlier ones, but anyone who's been paying attention to the lyrics knows the narratives always leaned toward life's grimmer stories. I'm a Stranger Here has a few more slowed down efforts — "heartbreak songs," as the band refers to them, along with the speedier road songs and barnburners. DM3 upright bassist Lucia Turino, guitarist Cooper McBean and guitarist/singer Pete Bernhard arrive in Humboldt once again — they've played at least a dozen shows here over the years since that first coffeehouse gig — on Wednesday, Feb. 4.

When Bernhard took a moment to chat with me last week from the road, we discussed how the world of a touring band has shifted, the importance of the DIY influence, and the truth and lies about what success requires.

When DM3 first hit the road 12 years ago, the band had no cell phones and Facebook had yet to become the defining connector of our lives. "Social media has changed everything," Bernhard noted, "mostly in a positive way." The downside, of course, is the oft-repeated assessment that people don't buy music anymore — they download it for free or use a streaming service like Spotify.

But, Bernhard pointed out, DM3 has a good relationship with the audience and fans are still likely to support the band by purchasing CDs. So the opportunities to spread the word about shows and music have made touring successfully much more possible. "That said," Bernhard said, "it doesn't mean [being in a band] is easy."

Not a part-time gig

Based on DM3's hard-earned knowledge about the challenges of making music a life path, what advice would Bernhard give to bands just starting out?

"The main thing is, if you have talent," he said, "is to not give up. It's a hard lifestyle and some people can't take it. You have to give it everything. You can't have a family, can't be as connected to your friends. You have to give your whole life to it."

People tell him how fun being on stage looks — and he agrees that part is fun — but that's not how he spends the majority of his time.

Do it all yourself

You have to go through a lot to get there, which leads to Bernhard's next point: "It's really important to understand business." You have to be able to handle all the details and promote your own shows. "You have to learn to do a lot of different things."

The point is, folks aren't going to take care of you. "Don't wait for other people to come along and give you money," he said. "If you do, it's going to be a long wait." The D.C. punk scene helped form DM3's DIY ethic. "Seeing the way Fugazi did it was really inspirational," Bernhard said. "They did it, we can do it — I still think of them so much."

Some truth, some lie

With reference's to I'm a Stranger Here being "darker" than previous albums, how does success and suffering influence an artist's work — specifically that perceived link between anguish and creativity?

"The whole thing has some truth and some lie," Bernhard said. "Some people think that if you do a lot of drugs and have no money, you're going to be a great artist. ... They're getting it backward and that's a sad lie for a lot of young people. Sometimes you get an artist who has a drug problem and that's too bad. You hope they get over it."

A need exists to have something going on of interest in your life, he continued, otherwise you have nothing to write about — but, "Anyone who knows an addict, knows being one is really boring." Ultimately, he finished, "Life will fuck you up anyway; you don't have to do it yourself. Turn it into a great song, make things that don't seem survivable survivable."

Other shows of note

Ska veterans The Toasters play Friday at the Jambalaya. Cover is $10, doors at 9 p.m., music at 10 p.m., 21-and-over... Soul Night returns to Hum Brews on Saturday with a special appearance by DJ Mantease. Tickets are $5, doors at 9 p.m., 21-and-over... Songwriter Circle of Death XII gathers at the Alibi Saturday night with TheBoredAgain, Nola Victrola, Uncle C and Keil la Chinga. Music at 11 p.m., cover is $2, 21-and-over... The Arcata Playhouse has teamed up with The Sanctuary to bring you fingerstyle guitarist Adrian Legg, Tuesday at 8 p.m. at The Sanctuary (13th and J streets, Arcata). Tickets are $15 general, $13 members, all ages... Finally, on Wednesday, Feb. 4, the Arcata Theatre Lounge hosts the first stop of Infected Mushroom's Animatronic Tour with a brand new stage by Humboldt's own Duane Flatmo. Doors at 9:30 p.m., show is free and 21-and-over.

Full event listings in the Journal''s Music and More grid, the Eight Days a Week calendar and online. Bands and promoters, send your gig info, preferably with a high-res photo or two, to music@northcoastjournal.com.