Lessons from the Hunks Show

The naked truth about male stripping 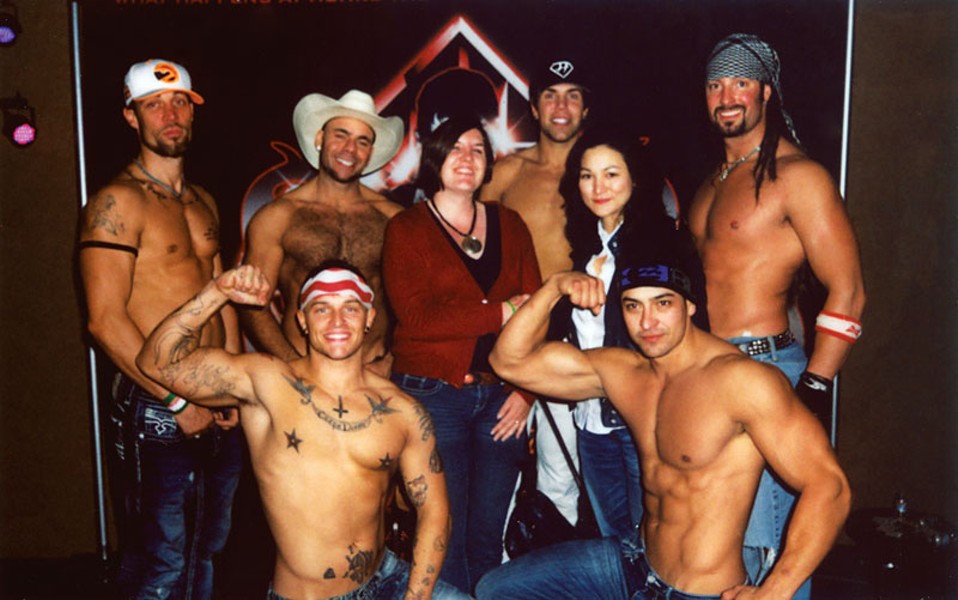 The intrepid reporters shake hands after a night of investigative journalism.

On Friday, Oct. 17, the Hunks Show and its platoon of ripped dancers descended on the Bear River Casino ballroom for "America's hottest ladies night out." The Journal was there. Here is what we learned.

There are rules. But not many. On the same night at the Tip Top Club, a man checked our IDs, peered down from his booth and recited, "No touching, no kissing, no licking and no propositioning." Gentleman's rules for a gentleman's club. But the Hunks aren't such sticklers. Our host in spangly-pocketed jeans placed a chaste palm over his crotch and instructed, "You may not touch here, or you go to jail." Whether this is real jail or some sexy, shirtless jail that takes bail in singles was unclear.

In fact, there is a lot of touching. Women who join the fellas on stage in chairs for an extra $20 get a fair pawing over. The lap dances in the crowd involve in-your-face (your actual face) gyrating, during which slapping a spandex-wrapped ass is encouraged. In a club, getting freaked by a strange man can be downright scary, but on stage and in the cheap seats, everyone was smiling and waving cash. We were in the safe, supervised bubble of the ballroom, with nothing to fear beyond embarrassment. Once he dismounted, the dancer who'd been straddling the grandmotherly woman two seats to our right hugged her and said something in her ear that made her smile as she passed him a couple of bills.

Still, it's a surprisingly orderly affair. We'd heard tales of drunken fights at similar shows in other venues, but this one ran like a well-oiled dancer. (From our seats on the side, we did, in fact, glimpse the dancers through a gap in the curtain pinned over the doorway, oiling up for the next number.) Sure, we were all a little nervous when the rowdy woman on stage got hold of a cast-off belt, but the bachelorettes and grandmothers kept to their seats all evening, clapping and hooting at the appropriate moments, depositing bills in G-strings and lining up for Polaroids after the finale.

The '90s aren't dead. From the moment the guys lined up on stage like a beefed-up boy band, we were transported to a time of ripped light jeans, bandanas, acid wash, sleeveless tops and tribal tattoos. Even the choreography smacked of late-period Janet Jackson, with lots of slow-mo air punching, synchronized thrusting and stomping.

Evidently, heterosexual women love skits. In one routine, "firemen" waved a blanket over a woman on the floor as if putting out a fire. Another number featured dapper gangsters and gunplay. Superman stripped down from his Clark Kent duds to "fly" into a woman's crotch, and Batman did some sight gags with an inflatable penis, making Ben Affleck seem like less of a crazy choice for the Dark Knight. Why all the Vaudeville? Well, sex is a seller's market for women. Why buy a ticket to watch a bunch of men when sex is something that you can get for free at the bar next door? Above-average bodies, humor and tight choreography, that's why. Also, it seemed like the guys were having fun. It was easy to imagine them trying on costumes and goofing off, bro-ing out over which phallic objects they could work into the act. Bones for the caveman skit? Fire hoses? Guns?

There is a formula. After the silliness, there's some group dancing, lip-synching and a little bump and grind. But as soon as the tear-away pants hit the ground, revealing skimpy skivvies, the boys scamper off faster than you can say "spray tan." Excuse me? Are the goofiness, high-speed numbers and quick exits supposed to spare us the awkwardness of staring at men's bodies with the same earnest focus as the men looking at women at the Tip Top?

Pouch-front thongs are a mistake. So is the combination of semi-nudity and high-top sneakers. Although the sneakers may be a concession to the athleticism this job requires. There's a lot of capering around the stage, and two or three of the dancers had knee braces. Way to play hurt, guys.

Watching a male strip show is a group sport for women. Again, back at the Tip Top, men (and the occasional woman) were planted around the stage like mushrooms in the dark, staring ahead in rapt silence at the sole dancer before them. But at Hunks, women in pairs and packs laughed and clapped, egging one another on. There was a camaraderie among the women, something unifying about having paid to ogle these dudes. There was no competition for male attention — we were all shapes, sizes and ages, and were all getting what we came for. We chatted easily with strangers about which man was the best dancer, who had the best butt and our feelings on chest waxing.

You will start washing your hands compulsively after handling money. You cannot unsee all of the various crevices of the human body into which dollar bills can be crammed.

Even professional sex workers sometimes don't know what's sexy. (Yes, the term sex worker encompasses strippers.) These authors don't find having a stranger's crotch thrust in their faces particularly arousing. Nor does jack-rabbiting simulated intercourse call to mind a satisfying sexual encounter. It was good, campy fun, but we didn't see anyone squirming in her seat with lust. What would make Hunks not just scream-worthy, but squirm-worthy? Backrubs? Whispered intimations? It's hard to say. But it's even harder to imagine a woman coming up with this show.