Lessons from the Road 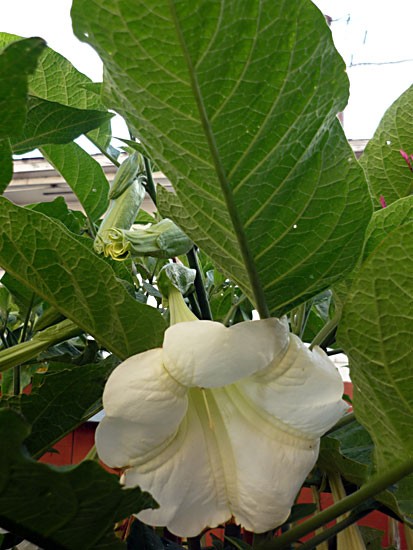 For the last month I've been on a book tour. Book tours consist of long periods of time away from home that are mostly spent wandering around in airports, reading incomprehensible driving directions while missing exits and finding creative ways to run your bar tab through the expense report as a bridge toll or a parking fee. On certain days you end up at a bookstore or a radio station, at which time people will tell you stories about the exquisite pain that has been inflicted upon them by plants.

Apparently the natural world is even more dangerous than I had been led to believe. Consider the following:

Euphorbias can blind you. This should be an obvious one. Anybody who grows euphorbias in the garden knows that they produce an irritating milky-white sap and should be handled with care. What I did not know about, however, was the dreaded Euphorbia Splatter. Not one person but two told me that they had been out pruning their euphorbias when some of that nasty sap flew into their eye (or, in one case, seemed to simply vaporize in the heat and send its stinging vapor death rays straight up), causing horrible pain and long-term eye damage.

Seriously. Long-term damage. One woman told me that her eyesight has still not recovered, a year later.

Both of them told me that they waited too long to even go inside and wash their eyes; that doing the stand-under-the-shower-for-a-long-time routine helped a little but not much; and that they now wished they had dropped everything and run off to a doctor or clinic where they could have gotten a professional eye-washing.

So. Remember that. Maybe garden with sunglasses, I don't know.

Rose thorns can give you a disgusting disease. Three people told me their tales of woe regarding '"rose thorn disease," otherwise known as sporotrichosis. It's caused by a fungus found on rose bushes, and a deep puncture wound with a rose thorn can introduce it into your bloodstream, where you will enjoy such symptoms as disgusting lesions, infections of the joints and nervous system and other such horrors. Treatment is difficult. One guy I met spent a week in the hospital and still wasn't totally recovered.

And once again: Their regrets? Failure to seek immediate medical attention. They did what I do in the garden: They toughed it out. They yanked the thorn out, wiped the blood off with their muddy sleeve and kept gardening. If only they had given themselves a little simple first aid, these people told me. Just gone inside for a minute, really cleaned up that little cut, maybe used a little ointment, put a good bandage on it -- maybe that would have made a difference.

Or maybe it wouldn't have. Don't take my word for it. I didn't even know about this disease until about two weeks ago. But I did learn that it's also found in sphagnum moss and hay, and it can be inhaled as well, although that's rare.

Protective gear is advised. The CDC even says to avoid skin contact with sphagnum moss entirely.

Children really do eat deadly berries. People always act like I'm overreacting when I suggest yanking out plants that might be tempting to pets or children too small to listen to reason. So I submit this to you: A nurseryman in the Northwest told me that he came home one day and his wife calmly told him that their toddler had eaten every berry off their daphne bush. Did he think that was all right?

All right? Hell, no, it was not all right! Daphne is very poisonous. Only a few berries could kill a child. The little girl was made to throw up, a great deal of unpleasantness ensued, hospitalization was involved and she lived. A happy ending, but still. What a nightmare.

Brugmansias can make you fall in love with your wife all over again. Speaking of happy endings, here's a story that's terrifying to no one but me, who had to hear it live on public radio and try to muster a response. A guy called in and told the listening audience that, while on a road trip, he and his wife bought a brugmansia (angel's trumpet) and had it in the back seat of their car for a few days as they went from state to state. One day it bloomed, filling the car with its lemony-sweet fragrance.

"And that night," the man said, with obvious astonishment in his voice, "My wife and I made love! Which is not that unusual, but you know, it had been a long day, we're just in some motel, but we thought, OK, that was nice."

(Try to imagine me in the radio studio, trying not to make eye contact with the host.)

So they continue their drive. The brugmansia continues to perfume the car. I continue to cringe and avoid eye contact with the host. Where is this going?

You guessed it. "And that night," he said, "We get to our next motel, check in, and you know what? Again! The next morning? Again!"

Don't ask me. I now officially know more about brugmansia than I ever wanted to know. I ducked the question and was relieved to see that we were finally out of time.

When I left the radio station, the host said, "I'd love to have you on again sometime."

"Again!" I said, and we both cracked up.

"Again!" he shouted, as I got on the elevator.

And then I went in search of a bar that would be willing to write up my receipt as cab fare. Just another day on the book tour.