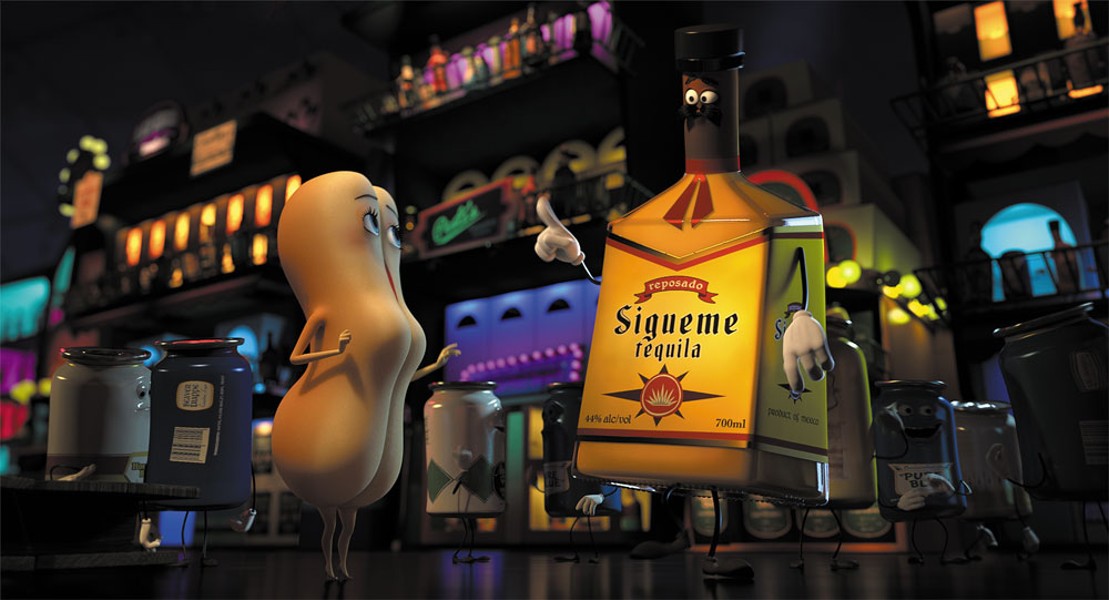 Sure. Put boobs on a hot dog bun.

SAUSAGE PARTY. One could make an argument that Sausage Party is exactly the sort of summer movie the world needs at a time like this. A jaunt down to the local cinema is meant as a refuge from the uncertain, shady funk of the world at large, and that outside world has been a bit haywire of late.

So here then is Sausage Party, a movie that's sort of difficult to describe on any everyday level, but let's proceed apace. First off — and this is vital — this animated opus is NOT meant for kids; it is stamped with an R rating for reasons no sane and sentient person could possibly question. From collaborators Seth Rogen and Evan Goldberg (Superbad, This is the End) comes this dizzyingly ribald not-like-other-things film that includes, in the well-paced time span of just under 90 minutes, wads of discarded gum, rolls of toilet paper and used condoms that have speaking parts.

Rogen and Goldberg have conceived a world, brought to life by directors Greg Tiernan and Conrad Vernon and masterfully imagined at a Pixar-level standard. Rogan lends his voice to an anthropomorphized hot dog by the name of Frank. Stuffed into a package of dogs at the suburban supermarket Shopwell's, Frank is, like every item on the store's shelves, imbued with the power to think, speak, sing and dance. And also to love, as he fondly pines so very much so for Brenda Bunson (Kristin Wiig), a hot dog bun just a few paces over on the shelf. As this tale begins, the Fourth of July weekend is nigh, and — as we learn in a raunchy and boffo opening musical number — everybody stocked on the shelf is simply dying to get taken out of the store by shoppers, God-like beings who shall guide every produce item, condiment, shrink-wrapped meat and otherwise to a sort of great beyond. There's some untruth in this belief, obviously, and soon the word spreads.

Given the deluge of Pixar, Dreamworks and Disney animated movies (which seem to be increasing exponentially), there's just something gleefully naughty about seeing that whole template in the service of a movie as insanely off-color as Sausage Party. Helping kick things into high gear is the opening number penned by Alan Menken, an Oscar winner and veteran of such family-safe fare as The Little Mermaid and Aladdin. That he gladly lent his talents to a concept that was likely spawned while Rogen and Goldberg were mired in the drive-thru at an In-N-Out Burger at 1:30 a.m. adds to the good summer vibes.

As the plot plays out, surreal and absurd, there's some wholesomeness in the story's adherence to the animated blockbuster model of characters overcoming obstacles to reach a goal and realize the strength of teamwork and friendship. But really, there is oodles of foul-mouthed fun in a bagel (Edward Norton) and a lavash (David Krumholz) learning to overcome differences about who has the right to more space for settlements in their aisle, in a sexy taco (Salma Hayek) with designs on Brenda and in the douchey villain of the story who is, well, a douche (Nick Kroll). There's a cameo from Meat Loaf, hot dogs having sex with buns ... I'm giving away too much plot here. It's August, it's too foggy out, and there's only so much Olympic and election buzz one can take. Buy a ticket. I didn't even mention the most scandalous parts. That's up to you to go discover, dear reader. R, 89m. BROADWAY, MILL CREEK, FORTUNA

WIENER-DOG. Director Todd Solondz made a big indie-film splash back in the 1990s with Welcome to the Dollhouse and then the oh-so unsettling Happiness. He's kept a low profile in recent years, more focused on low-budget movie projects. With Weiner-Dog, he has something that's a reminder why he's a subversive filmmaker who can get good actors involved with a good script. A point of interest in Wiener-Dog is that the character of Dawn Wiener, last seen in Dollhouse, appears here in adult form, played by a fittingly low-key Greta Gerwig. The rest of the story, told in four segments, is bound together by the thread of the titular dachshund, originally adopted by a young cancer survivor (Keaton Nigel Cook). Plot machinations seen, and not, take the movie through several twists, all while we explore human characters in their subtle misery. Solondz hasn't lost his knack for deadpan, Jim Jarmusch-like pacing and making everything from suburban estrangement to the banality of awkward conference calls or the ludicrousness of academic ennui seem both maddening and hilarious. Danny DeVito, Ellen Burstyn and Zosia Mamet all turn up and are spot-on great. Solondz's worldview is bleak but, for the first time in a while, that bleakness doesn't need too stiff a chaser. R, 88m. RICHARDS' GOAT MINIPLEX

HUNT FOR THE WILDERPEOPLE. A rural New Zealand boy (Julian Dennison) makes a run for it with his foster uncle (Sam Neill), setting off a months-long manhunt in this big-hearted, unassuming and well-crafted indie. PG13. 123m. MINIPLEX.

SUICIDE SQUAD. This unremittingly awful mess of semi-random violence rattles on without any emotional or narrative center as DC Comic villains take on badder guys. With hope from Margot Robbie as Harley Quinn and Jared Leto (briefly) as the Joker. PG13. 123m. BROADWAY, FORTUNA, MILL CREEK.