Let's Talk About It: Be Concerned 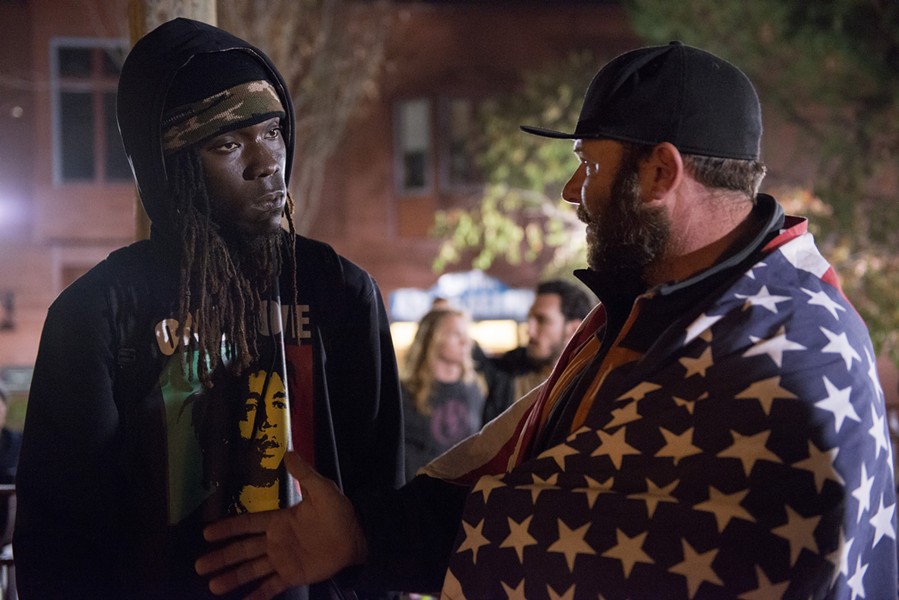 There is cause for concern that the rhetoric of the Trump campaign and the election results have emboldened hate groups and extremists. This hits close to home. We must not forget the heinous crime committed in Eureka in 2011, when a white supremacist couple from Washington killed African-American Reginald Clark, after killing a young man in Oregon because the murderers thought he was Jewish.

In 2000, Donald Trump publically characterized David Duke as "a bigot, a racist, a problem," yet during the recent campaign Mr. Trump insisted that he didn't know anything about the former Klu Klux Klan leader. This is alarming. It's further alarming that millions of people of goodwill chose to overlook the dangers of opening the door to hateful speech. One of the largest Ku Klux Klan groups in the country has plans for a Trump victory parade in North Carolina.

My friends who voted for Mr. Trump are neither bigots nor racists, but evidently they are not as worried as I am about unleashing hatred in our communities. It's sobering to recall that the Nazis came to power in 1932 through a democratic election process. As neo-Nazis in America celebrate Mr. Trump's success, every thoughtful person should be concerned.

Equally chilling is the news this week that two students were arrested with explosive materials and plans for a mass casualty event at Fortuna High School. Apparently, one of the would-be perpetrators divulged something of the plan to a friend and word quickly reached the school principal who called in the police, preventing what might have been a devastating tragedy. It is horrible to think of two local 15 year olds plotting such a deranged and destructive act.

I don't mean to suggest that there is any link between the election and the attempted atrocity in Fortuna, but it's crucial to acknowledge that we have mentally unstable people in the community — young and old alike — with easy access to weapons and explosive materials. We must take all threats very seriously. And there should be zero tolerance for hate language. We need community groups and individual citizens to work closely with law enforcement, and with one another, to prevent future tragedies.

Last spring, the Eureka Interfaith Fellowship sponsored a program titled, Understanding Islam: A Community Conversation. More than 250 people poured into a Eureka church on a beautiful May afternoon to hear presentations by Humboldt State University faculty and members of the local Muslim community. Many people requested future sessions. There is a hunger to learn about Islam, to understand the historical narratives of the Muslim world and the geo-political forces shaping current events.

This coming spring, Temple Beth El will celebrate the 50th anniversary of our synagogue building. For more than half a century, the Jewish community in Humboldt has flourished with warm support from the general public and very, very few instances of harassment. We count our blessings. And we understand how important it is to protect the religious freedom, holding the First Amendment to the Constitution as dear as sacred writ.

In the mid-1990s, Humboldt was polarized by crisis in our timber industry, but 20 years later those divisions seem considerably less stark as we have embraced a more diversified economy and the benefits of high-tech life. It's my hope that our community can continue to set a high standard for reconciliation and cooperation. At this divisive time in the nation's history, we all should be thinking about what we can do right here, in our homes, our neighborhoods, our workplaces, schools and community institutions to promote peaceful, productive dialogue about painful issues of social inequity.

Saturday, Dec. 10 is Human Rights Day, commemorating the anniversary of the signing of the Universal Declaration of Human Rights in 1948. Hundreds of Jewish congregations in America celebrate a special Human Rights Shabbat on the Sabbath nearest the holiday. This year's observance coincides with the reading of the biblical story in which Jacob dreams of a ladder reaching between earth and the heavens with angels ascending and then descending. One interpretation of this story could be that in connecting with our Highest Ideals, we must be prepared to make the efforts of rising up to steep challenges before we expect beneficence to flow down from above.

The public is warmly invited to hear as we chant this ancient text from a beautiful handwritten scroll, and to join us in song and celebration of Human Rights Day and the Sabbath, which we honor as a day of deep rest and renewal, taking a break from conversation about turmoil and strife, turning our thoughts toward wholeness and hope.