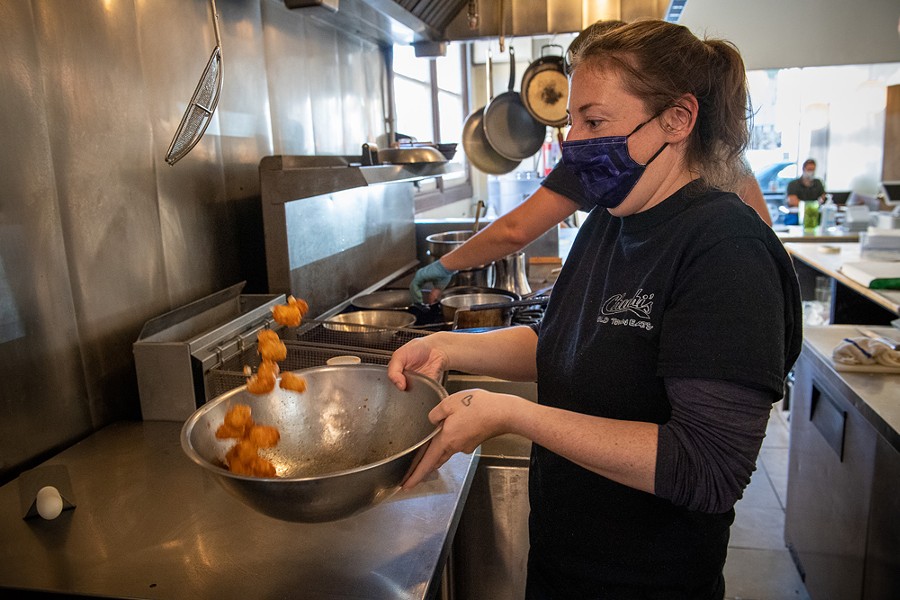 For owner Jeni Masaki, the hardest part of closing Masaki's Kyoto Japanese Restaurant was running into her regular customers and breaking the news to them. But as of last week's soft opening, she's happy to spread the good news about the sandwich joint she's opened in its place: Chuchi's Old Town Eats, which borrows her daughter's nickname and is adapted to shelter in place.

Kyoto "took a huge hit in sales" after legalization, Masaki says, estimating a 25 to 30 percent drop in receipts once her cannabis industry clientele were hit with the cost of compliance and taxes. And after recovering from PG&E blackouts, the COVID-19 pandemic that forced the dining room closed in March was yet another blow.

"Our product [at Kyoto] is very perishable — we can't hold it for very long and our dining room is tiny," Masaki says, making eventual distanced dine-in service —whenever indoor dining and/or willing customers might return — impractical. And takeout was only raking in $100 or so a day, not enough to cover inventory and staff. In mid-April, she sat down with her husband, Eric, with whom she first bought the restaurant from founder Kyoko Clark before Jeni took on running the place herself, and admitted, "This is crazy. ... We've been here for 13 years, which kills me. It was a really hard decision."

But Masaki wasn't done yet. So she and some restaurant business pals got to brainstorming, and came up with a concept that recalled the grilled sandwich place she and her husband once ran in Colorado. Her other business Central Sandwich in McKinleyville, where grab-and-go sales were brisk, seemed like evidence a sandwich shop could thrive in a pandemic. Less overhead, lower prices for a cash-strapped community and inventory with a little more staying power all appealed. "Deli meats keep," she says, "raw albacore and hamachi don't keep."

The space, with its sushi bar prep area, was already suited to assembling sandwiches in some ways but she still needed to close off the kitchen and add a proper counter and a new point of sale system. She also got a bigger fryer, now hard at work crisping tater tots. Only the old counter and paper lanterns still hanging above it reveal the shop's former life.

Michael Vitiello, formerly of Hurricane Kate's and the Shanty, who also officiated Masaki's wedding 17 years ago, helped her write a menu of fresh takes on classic sandwiches that run from a New Orleans style muffaletta to a Cubano to a Monte Cristo on the hot side to a bánh mì and a BLT on the cold side. The sandwiches are all fairly hefty and run in the $10-$12 range — a price point that's easier to swallow than sushi for a community facing uncertain economic times. Vitiello even has the honor of his own namesake sandwich: the Godfad (Masaki's daughter's childhood nickname for her godfather Vitiello), a ham, mortadella, capicola, salami and provolone sandwich with oil and vinegar that's an homage to his East Coast Italian roots.

Some other sandwiches are named after friends, as well, and the logo is by Masaki's friend Rob Gribbin of Sailor's Grave Tattoo. "It has definitely taken a village to get this place going," says Masaki, who's as grateful for the kitchen staff she was able to keep on as she is for the forbearance of her landlord. "My landlord has been very nice," she says, allowing her the time to catch up on rent. The same goes for her water bill and other expenses. "This has been such a crazy, unprecedented event. And I couldn't' have made it through without a lot of, 'It's cool and we'll see you in three months.'"

For now the shop is open Tuesday through Saturday from 11 a.m. to 4 p.m. for takeout with a couple of tables on the sidewalk outside. The response has been good so far. "We're just working on getting our timing down," Masaki says, noting that customers aren't complaining. "I'm the impatient one," she tosses out, laughing. Hearing a restaurant owner laugh talking about work is rare enough these days to make one pause. "Most days are great days."

"Closing Kyoto's was heartbreaking but you gotta move on and hopefully this will make people happy," she says. "And I have the raddest clientele. It's still us."