Life with the Folks

Humboldt Folklife Festival, plus The Impalers and The Alliez, The Dead Kenny Gs and King Maxwell 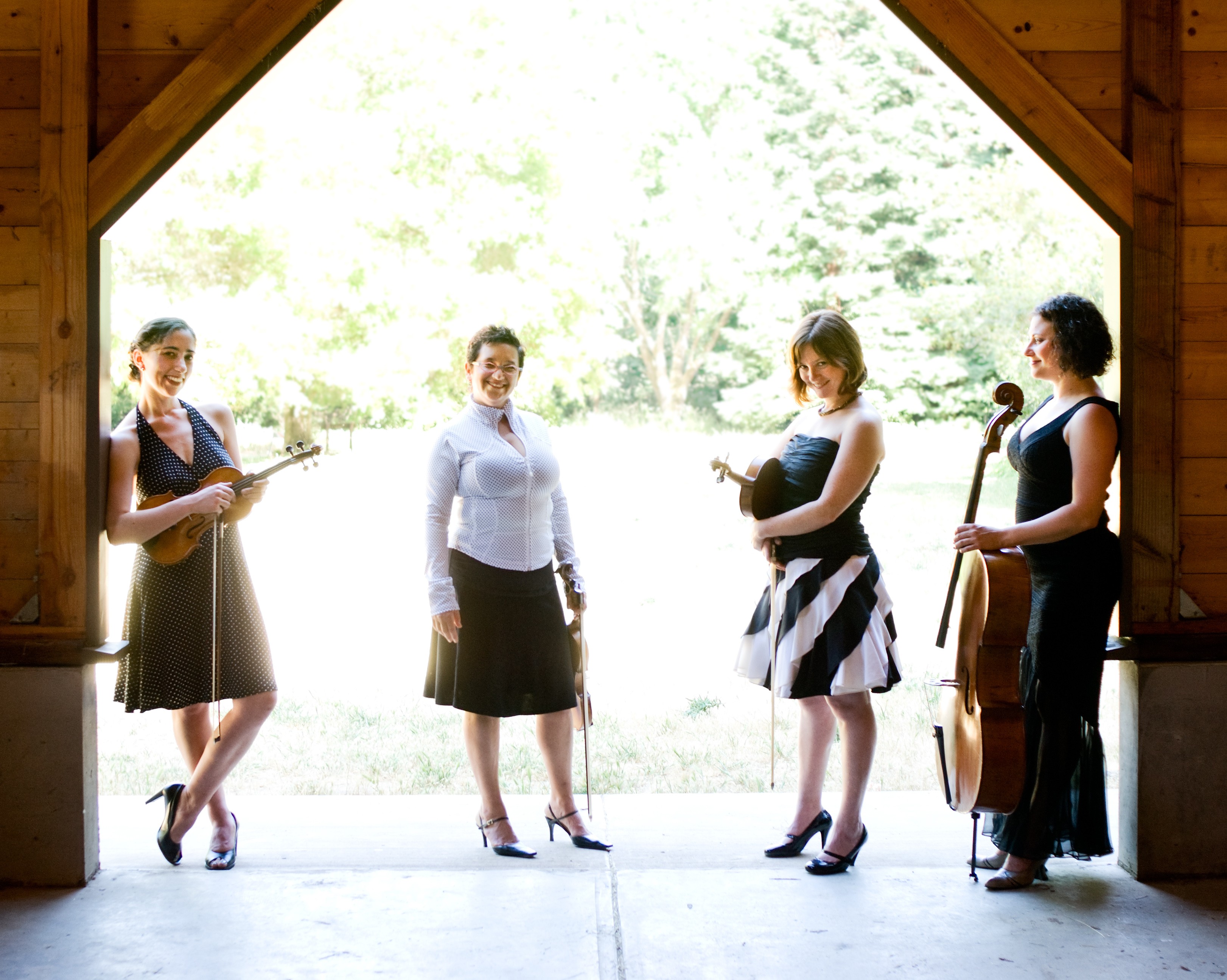 The Humboldt Folklife Festival begins a full week of folky and not-so-folky music events with the Annie and Mary Day Fiddle Festival Sunday afternoon in Blue Lake's Perigot Park. What was once a fiddle contest of sorts shifted in years past into a showcase for fiddle students and a local band or two. This year the Folklifers have continued the transformation with a half dozen bands exploring a half dozen different styles, with fiddles as a common thread. The fiddling starts at noon with old timey tunes by Folklife barn dance regulars Striped Pig Stringband, moves on to bluegrassy jugband music by No Good Redwood Ramblers, more or less straight-ahead bluegrass by Bubbles house band Clean Livin', songwriter folk by Lonesome Roses (with fiddler Claire Hashem-Hanlon), concluding with Cajun tunes by The Bayou Swamis.

Second to last (starting at 3:20) is a festival anomaly, the San Francisco-based Real Vocal String Quartet, a non-local band in what is pretty much exclusively a Humboldt-centric festival. Founded by fiddler/violinist Irene Sazer from the jazzy, genre-hopping, post-newgrass combo, Turtle Island String Quartet, RVSQ is a violins/cello/string bass chamber music ensemble with a twist, adding (sometimes wordless) vocals, and, on their eponymous debut album, drawing on everything from classical quartets and mutant bluegrass to songs with Balkan, Afro-Brazilian and Latin touches with one influenced by the North African trance band Tinariwen. Did I mention this is a free show?

Wednesday the action is out back in Dell'Arte's Rooney Amphitheatre for the first ever Country Night with The Country Pretenders featuring Joyce Hough and Fred Neighbors (seen recently in Dell'Arte's Mary Jane: The Musical), plus an electrified Huckleberry Flint and country rockers Cadillac Ranch, who draw on Burrito Bros/Poco/CSN-style harmonies. You may want to dance at times, but bring a blanket to sit on and/or wrap up in after the sun goes down.

The Fest continues through next Saturday -- more details next week, and a full schedule in the pull-out in this paper.

Spent a few relaxing days hanging out on the Mendocino coast with old friends over the weekend. For years I'd been hearing about the coolness of the historic Caspar Inn, so I was stoked when I saw a handbill/calendar saying they had a big reggae show while we were there with Tony Rebel and Queen Ifrica, sort of a preview of the upcoming Reggae on the River where both artists are performing on Sunday, right before Seun Kuti and Egypt 80. It seemed like something that might sell out, so I called ahead to see about advance tickets, only to learn that the show was cancelled. "The Reggae on the River people pulled the plug," said the Inn's booking guy, explaining that the Mateel had invoked a non-competition clause. He suggested coming to see the heavy rock bands he'd booked instead ("two bands, only $10"), but we opted for another night soaking in the hot tub.

Apparently the non-competition clause was not invoked for the Bad Kitty reggae/ska/rock show at the Red Fox with The Impalers and The Alliez on Friday, the night before both of those bands play Reggae on the River. The Impalers initially came together as a studio band for San Francisco-based Axe Records, drawing members from 3rd-Wave Cali-ska bands including Skankin' Pickle, Let's Go Bowling and The Rudiments, adding horny funk to the mix. The Alliez are a reggae/surf/rock band from Maui, but have Humboldt roots in guitarist Brian Sykes, formerly of Thick As Thieves and numerous SoHum bands. If by chance you pick this paper up on Wednesday, The Alliez are doing a benefit for Beginnings School at the Octagon, sharing the bill with another SoHum expat, Jade Steel, also in town to play Reggae on the River. Local ska warriors Killbot Factory open the show Friday at the Fox; Pressure Beat Soundsystem fills in the gaps with more ska. Incidentally, if you are down in Mendo this Thursday night, The Alliez are playing at the Caspar Inn. Hmmm.

Thursday (July 14) the Red Fox welcomes the return of The Dead Kenny Gs, a band whose name speaks volumes, simultaneously dissing the dreadfully smooth saxophonist and punfully name-checking the punk pioneers. The self-described "punk jazz" trio with saxomaniac Skerik, bassman Brad Houser and rhythmatician Mike Dillon claim Rahsaan Roland Kirk, Deerhoof and The Minutemen among their influences, but their sound is more alt. jam or like a West Coast version of NYC's often anarchic downtown jazz.

Bad Kitty returns to the Fox Saturday for "Dana's Birthday Bash" (I have no idea who Dana is) featuring Humboldt Irish punks The Smashed Glass and The Chop Tops, a "revved-up rockabilly" outfit from Santa Cruz.

The Arcata Theatre Lounge presents an evening of experimental music Friday starting with Swimming, the nom du band of Devon Ferrucci, who creates musical textures by feeding sound from guitars and other instruments into looping devices and a computer. Devon is also a member of the amorphous thelittlestillnotbigenough, an ensemble of varying size and membership who explain that "those of us who huddle together to create sound in unison become the 'band' and by doing so we vibrate as one." Vibrate on.

They call their music "carnival rock," but I'd describe Moonalice as a classic jamband, one with multiple tendrils into the Dead camp. You have Barry Sless from David Nelson Band and Phil Lesh and Friends, John Molo also from Phil and Friends, Pete Sears from Hot Tuna and Jefferson Starship, Roger and Ann McNamee from Flying Other Brothers -- jammers all. Catch them when they return to Humboldt Brews on Saturday.

Austin-based 12-string guitarist/harmonica player Danny Fast Fingers returns to Humboldt on his "Hwy 101 MicroBrew Tour" next week playing Saturday at Six Rivers Brewery and Tuesday at Mad River Brewery, both dates with his music partner Debra Parr on bass. It's a return for Mr. Fast Fingers since he lived here for a couple of years in the '90s, a time that he says (in his self-penned bio) "brought him back to his 'folk' roots" and included the release of an album, Mad River, which, allegedly, "was received with high acclaim in Humboldt."

Breakfast in Bayside at the Grange this Sunday morning offers "sumpin' extra" beyond the usual "gourmet" pancakes etc. For one thing there's music by Lorna and Stephen Brown, aka The Tesla Duo, with Steve on guitar and Lorna on accordion playing an international array of dance music. There's also a special Zumba dance, "Sump Pump Bump!" led by the always joyous Zumba evangelist Marla Joy, intended to spur donations to help with repair of the hall's dying sump pump. Give $5 beyond the usual breakfast price and you get an extra decadent cinnamon roll.

The Arcata Alibi's Monday Night Budget Rock on July 18 features rock 'n' roll DJ King Maxwell working "the thin line between a bar fight and a really good time" (according to Alibi booker Francois). "Regarding rock," says Maxwell, "I take it seriously. Respect the rock. I'm a traditionalist with a preference for good songs -- The Allman brothers, Joan Jett, ZZ Top, Skynyrd, Jerry Reed, Rolling Stones, The Pretenders -- all on vinyl of course." So, like, classic rock? "You might call it classic rock, but there simply isn't any debating how good some tunes are. Especially with beer," sez Maxwell.