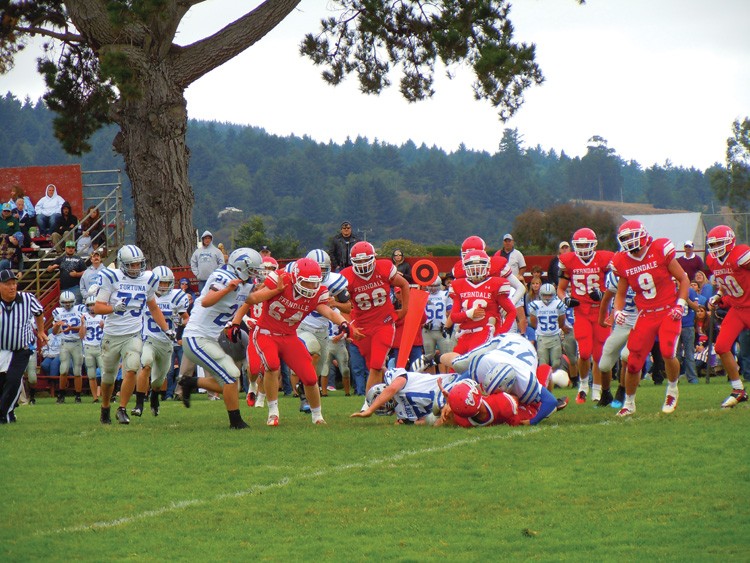 On Saturday, the center of the universe shifted to the Eel River Valley for an afternoon, a two-tone swirl of color and noise -- one half red and white and shouting Go, Wildcats!, the other half blue, silver and white and shouting Go, Huskies! Bands erupted. Cheerleaders chanted and flipped. The fans roared. And in the middle of this shimmering sphere, the warriors squared off, red and blue comingling in bursts, pulling apart, and then grappling again and running, running.

There was even, after a time, sunshine -- perfect for the 47th annual Milk Can Game between valley brethren rivals, Ferndale High School and Fortuna High School. Around about half time, when the game was 7-7, Ferndale High Superintendent and Principal Jack Lakin, dressed in jeans and a red-and-white plaid shirt, stood with his wife on a small slope behind the endzone near the Wildcats Boosters' goodies booth. Everything was going perfectly, he said, "just perfect."

In some ways, more than who won the coveted milk can trophy was at stake in this, the first home game of the season -- the fans were under scrutiny, and so was Lakin.

Last year, Ferndale fans were accused of yelling racial taunts at opposing team members at at least three separate games -- at the end of the previous season, again in September, and again in December. That all led to a complaint filed with the North Coast Section of the California Interscholastic Federation by Stephen Walters, the grandfather of a McClymonds High player involved in the second incident. Walters' complaint said that although Superintendent Lakin was "cordial and conciliatory" with him after a fan at a Sept. 3 game in Ferndale allegedly yelled at his grandson, "Get up, n* and take your n* ass back to Oakland," Walters was concerned, after hearing of the third incident, that "school officials cannot be counted on to put a stop to this behavior."

The NCS investigated and placed the Ferndale High football program on probation for this season, telling staff to come up with a game management plan to ensure better fan behavior. A couple of weeks ago, Lakin revealed that plan. There would be more monitors, including some undercover independent ones. And only players, student staff and coaches could be on the sidelines -- unlike at past home games, where anyone could wander into the sidelines, and many did. He didn't mention the media specifically, but soon news spread that he'd instituted a "media ban."

Furthermore, the sideline area -- the distance between the edge of the field and a rope the school strung up around it -- had grown. Fans and, yes, media, would have to be in the more confined space behind the rope.

In an editorial in the Enterprise the following week, Titus wrote that Lakin had "arbitrarily and capriciously kicked the media from the sidelines at all home Ferndale High football games."

In an interview with John Matthews on KSLG (94.1 FM), Lakin objected to the term "media ban" and said change was difficult.

Later Lakin said much the same to the Journal. "It borders on foolishness, the idea that this has been identified as a media ban," he said. "We wanted to change this culture of people feeling comfortable walking into the area where they shouldn't be."

He said the official rules call for a six-foot space between the edge of the field and the restraining line -- his distance is a bit wider. It's actually up to 18 feet wide in some spots, said Titus, who measured it last week. Big deal, said Lakin.

"I'd find it embarrassing to say I can't shoot from 12 feet instead of five feet," he said.

Before last Saturday's game, Tag Wotherspoon told the Journal it's unprofessional to not let media onto the sidelines. "It's unheard of, and I've been covering high school and college sports for over 30 years." Wotherspoon broadcasts the local games on Lost Coast Communications' The Point (KWPT) and also co-hosts a local sports talk show called North Coast Game Night on Bi-Coastal Media's ESPN at 1340 AM. Ray Aspuria, sports editor for the Times-Standard, said he was wary of the new sideline rules until he learned that they didn't apply to the opposing team's sidelines -- media could go onto those. Manny Machado, sports director for News Channel 3, said his crew won't be able to get eye-level anymore to shoot the Ferndale home games. But he wasn't concerned. "We'd love to be on the field, but as long as we're in the press box, I'm OK with it," he said.

Machado and Aspuria noted, however, that Ferndale is the only local school to ban media from the home team sidelines. They could see the school's side of things, but why not just issue media credentials? Matthews, Titus, Wotherspoon and others have wondered the same. Lakin doesn't budge. Wotherspoon and Titus suggest perhaps Lakin is targeting the media, then. They both covered the racial slur allegations last year extensively, and they critiqued Lakin's administration's handling of the allegations -- too defensively, they said, not quickly enough, and not always openly. Wotherspoon said some fans threatened him last year, saying he would "never, ever broadcast a Ferndale game again."

Lakin said people keep asking him why he's "doing this to the media when they didn't do anything."

"First of all, we're not doing anything to the media," he said. "And our students and our staff didn't do anything either. But because the people who did this are faceless, the community as a whole and the school has had to bear the consequences."

Titus, however, accuses that the new sideline rules were decided improperly behind closed doors. (Lakin says the issue was discussed in open session. She says a recording of the open-session meeting reveals it was not.)

"In my 28 to 30 years of being a reporter, I have never dealt with a public official like Mr. Lakin and the way he chooses to handle the media," Titus said.

Back to Saturday's game. Yes, the sun was out. But the Wildcats seemed subdued now. A player, Kaden Zanone, had been hurt; maybe that was it. Or...

"I think the fans are quieter because they feel they got their hands slapped by the powers that be," said fan Gary Renner.

Mayor Jeff Farley, standing near the end zone, agreed people seemed watchful. When Times-Standard photographer Shaun Walker hurried into the end zone sidelines to shoot a play, Farley said, a bunch of fans shouted out at him, "Get behind the rope! You'll get us in trouble!"

Walker and another photographer mostly shot from Fortuna's sidelines. After the game, Walker said he thought the new rules didn't apply to the end zone. He added that not being able to shoot from Ferndale's sidelines wasn't a big deal -- he usually shoots from the other side anyway so he's not aiming into the afternoon sun.

By the last quarter, Zanone was back in the game, Ferndale was zooming ahead and its fans, once again, were supercharged. At the end, they swarmed onto the field to gather around Ferndale's victorious team players as they hoisted the coveted milk can.