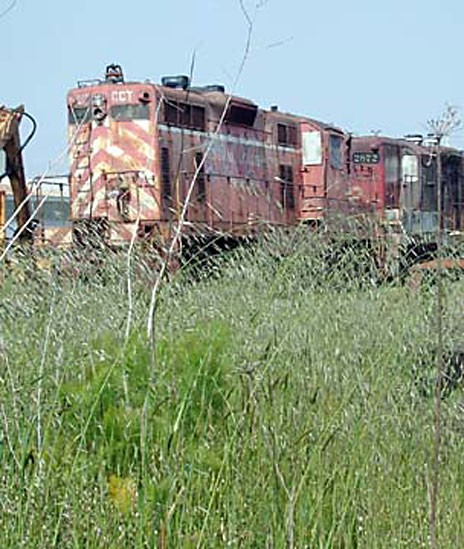 The North Coast Railroad Authority, the public agency that controls the long-dormant train tracks between Humboldt County and the Bay Area, is on the verge of running out of cash. It's been 12 years since any trains have made the trip from the city up to our area, and though it looks as if freight service may be restarted at the southern end of the line some time next year, it may be a long while before the public agency in charge of the railroad sees any revenue from it.

Meanwhile, the authority's debts continue to mount, with several major loans coming due in the upcoming months. Many of its assets have already been mortgaged to the hilt in order to keep the authority afloat. Its board of directors -- a nine-member panel composed of representatives from Humboldt, Mendocino, Marin and Sonoma counties -- is considering selling off other public assets, including the Ukiah Depot, to make ends meet. But a sale is politically problematic, and it wouldn't keep creditors at bay for very long, in any case.

In the midst of what may be the worst financial crisis in the troubled authority's nearly 20-year existence, some are starting to make plans for what may happen to the railroad's assets -- principally, its 300 miles of track -- if the authority is forced to declare bankruptcy. Pat Higgins, a member of the board of directors of the Humboldt Bay Harbor, Recreation and Conservation District, lately has been floating an audacious plan to transfer management of the Humboldt County section of the track from the railroad authority to the Harbor District.

At a meeting of the North Coast Railroad Authority board of directors in Eureka last Wednesday, Higgins read a prepared statement asking the authority's members to start planning for disposition of its assets in the event of bankruptcy. He said that his district had the legislative mandate to assume management of the local stretch of track, and warned that failure to plan for bankruptcy could result in the piecemeal fragmentation of the railroad right-of-way.

"If you were operating more like a business, which I believe is necessary given these challenging times, you would consider cutting your losses in Humboldt County and transfer of your right-of-way to the Harbor District," he said, referencing a bleak analysis of the authority's financial position written by Marin County Commissioner Tom MacDonald in September. "We have port and rail authority, and so such a transfer makes sense from a governmental standpoint, although I am aware that it would require legislation."

Not everyone considers the situation quite so bleak. NCRA Board Chair Allan Hemphill told Higgins that MacDonald's September paper "was not meant to be the punctuation to the question." He said that the board was currently acting on the paper, seeking out ways to increase revenue and decrease debt.

Nevertheless, the picture painted by the MacDonald report is undeniably bleak. For years, the authority has stayed alive by borrowing money every which way it can, and now those loans are starting to come due. During this fiscal year, with almost no cash in the bank, the authority must pay off over $300,000 in debt that is reaching maturity. Over $175,000 of that amount is owed to the Harbor District, which loaned the railroad operation funds several years ago. The Harbor District is itself in fairly dire straits at this time, and its directors have ruled out the possibility of letting the debt ride any longer.

Next year is even worse for the authority: At that time, it will be on the hook for nearly $800,000 in debt pay-down, most of it to NWP Co., the private company that has contracted to run freight on the line if and when it again becomes operational. NWP Co. has loaned the authority around $1.5 million in recent years. Though the company plans to reopen service in Sonoma and Marin counties this year, following an upgrade of track on the southern end of the line, it is not obligated to pay operating fees to the authority until it nets a $5 million per year profit.

Higgins's proposition -- he stresses that he speaks only for himself, not the Harbor District at large -- is that the authority may be better off abandoning at least some of its Humboldt County right-of-way in exchange for debt forgiveness. The authority has put off any plans to reopen the full length of the line for the foreseeable future, given that the remote stretch of track between northern Humboldt and Willits -- the so-called "Eel River Canyon" section -- is in such a state of disrepair that no funding sources can be located to pay for its renovation. With that section closed, the justification for the authority

Higgins said Monday that he imagined the Harbor District would be better poised to put the Humboldt County to use. He envisioned the district working closely with groups such as the Timber Heritage Association, which wants to run a historic tourist train around Humboldt Bay, and with trail advocates who want to build an intercity walking and biking path. Unburdened by debt, he said, the Harbor District could reinvent the transportation corridor for the 21st century.

"How do we deal with death?" Higgins asked. "The Tibetians, they laugh. They say, 'You're born, you die and then you come back.'"

Reached Monday, Humboldt County Supervisor Clif Clendenen acknowleged that the authority is in dire straights, but he stopped just short of endorsing Higgins' vision. "There's certainly a lot of challenges for the authority, but I think to say that we're going to part it out for the junkyard would be premature," he said.

But Clendenen said that he and others on the authority's board of directors were looking at other mechanisms through which the northern Humboldt section of the line might be put to more immediate use. Clendenen said that the thought the authority might want to essentially rent out the right-of-way to some body representing trail advocates, or the tourist train, or both.

"I think it would be quite reasonable, in a shorter time frame -- 10 years, 20 years -- to lease a section that we have no immediate use for," he said.