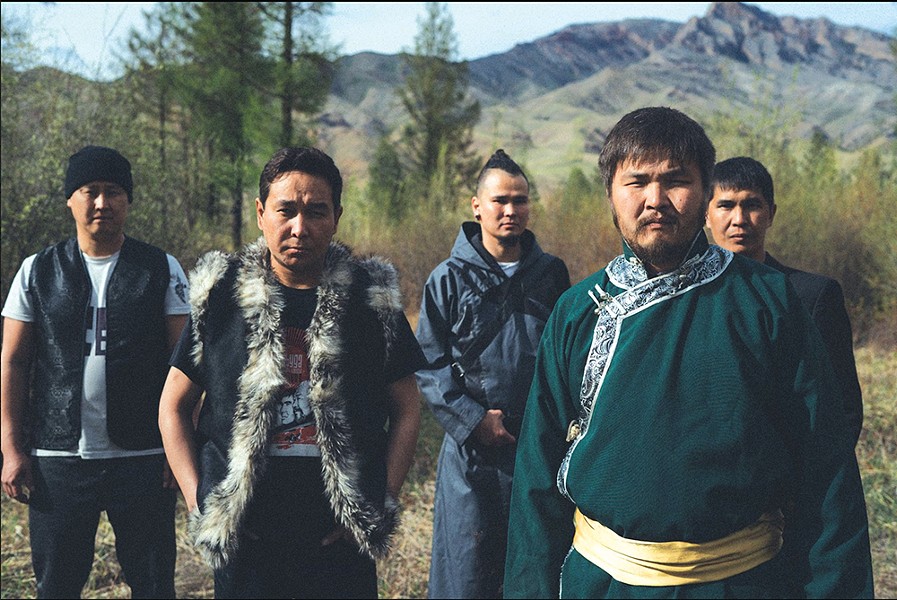 Courtesy of the artists HARTYGA plays the Outer Space at 7 p.m. on Tuesday, Sept. 10

The Book of Sirach, one of the Books of Wisdom from the Tanakh, tells me that if I conduct my affairs with humility, I will be loved more than a giver of gifts and that I should avoid seeking the things too sublime for me or beyond my strength. For, I am told, "The mind of a sage appreciates proverbs, and an attentive ear is the joy of the wise."

I believe that this is likely all true, however inscrutable it might be in practice for a tin-eared jackass like myself. So I have decided to spend this week listening. To what, you might ask? Well, whatever. You, reader, if you care to drop a line, the wind, the animals, the ocean. Snippets of conversation and calamity out in public. Whatever drifts by. I'll be an opportunistic feeder, like a fat catfish sitting in a deep hole under a grain loader for the barges. I'll be the sentient smartphone hearing everything nearby and regurgitating obnoxious suggestions from the poor proxy of meaning I glean out of my spying. I will even try to read some of the articles my friends forward me. And why not? School's back in session and the human world is learning while the natural world is ripening and getting fat. I might as well get on board. I might even listen to some live music this week and perhaps you will, too.

I will close with a favorite quote by Eubie Blake, which seems adjacent to the ancient Sapiential book I quoted earlier: "Be grateful for luck. Pay the thunder no mind — listen to the birds. And don't hate nobody."

If you can't afford tickets to Mike Love's road version of The Beach Boys tonight (The Arkley Center for the Performing Arts, 7 p.m., $94), that's OK. May I suggest you hoof it over to the Siren's Song for the Humboldt Poetry Show? Sign-ups begin at 7 p.m. and in addition to live art by Dre Meza and record spinning by DJ Goldylocks, there will be a special performance by Richmond, California's Wonder Twins (free).

There's a big ol' loud rock show at the Miniplex tonight at 8 p.m. Southern California quintet and Tee Pee Records recording artists Sacri Monti join neighbors Monarch and local crushers White Manna for a brightly colored night of earwax-dislocating psyche rock. I'll be there and if the locals remember to bring the fog machine, I promise to set it off a few times ($7).

It's another iteration of Radio Clash, everyone's favorite new wave, punk and '80s vinyl dance party at the Alibi tonight at 11. ($3). Join DJ Anya, DJ Zephyr and Julie Unrulee at the dark side of the bar, where all cats are gray and Bela Lugosi's in a permanent state of quantum uncertainty between "dead" and "undead."

New York City's anti-folk, anti-Nazi, leftist collective Out of System Transfer brings a bright semi-acoustic gleam to the age of resistance. Tonight the group will be appearing at Siren's Song at 7 p.m. for a night of ensemble collectivism. Local posh punk darlings Scum Lourdes pad out the bill nicely (price TBA).

It's a good night for comedy and the Miniplex has your fix. New York City's Jake Flores hosts his own leftist podcast Pod Damn America and has made an appearance on Chapo Trap House in the wake of a Cinco de Mayo joke about ICE that was so good it inspired a visit to his home by the Department of Homeland Security. Also on the bill is the massively talented Sara June, whose mere existence as an Iranian-American comedian and writer is undoubtedly a similar obscenity to the pigs who run our increasingly fascist country. Laughter/applause sign buzzes. Local wizard — the good kind — Dr. Foxmeat opens at 8 p.m. ($5).

Super fucking cool Tuvan band HARTYGA makes its way from its Central Asian home of Kyzyl to our sleepy burg of Arcata to share the mix of throat singing and ensemble rock jazz that earned the group its stripes. HARTYGA — which is Tuvan for "falcon," a bird of incredible importance to the Turkic cultures of Central Asia — will be sharing the stage at the Outer Space tonight with the woodwind punk jazz action of Arrington de Dionyso's Malaikat dan Singa, as well as local thrash surfers The Sturgeons. This one's gonna be an awful lot of weird fun starting at 7 p.m. ($10-$20).

Brooklyn's Sharon Van Etten is an occasional actress and full-time folk musician whose multi-layered harmonies and prodigious songwriting have earned her worldwide acclaim on the indie darling circuit. If you are a fan of good contemporary folk music or the David Lynch show Twin Peaks (she appeared in an episode of the viciously dark renewal of the series) you should come check her out at the Van Duzer Theatre tonight at 8 p.m. ($30).

Collin Yeo thinks one's weakness can become a terrible strength when it is used to break good things or to hurt other people. He lives in Arcata.