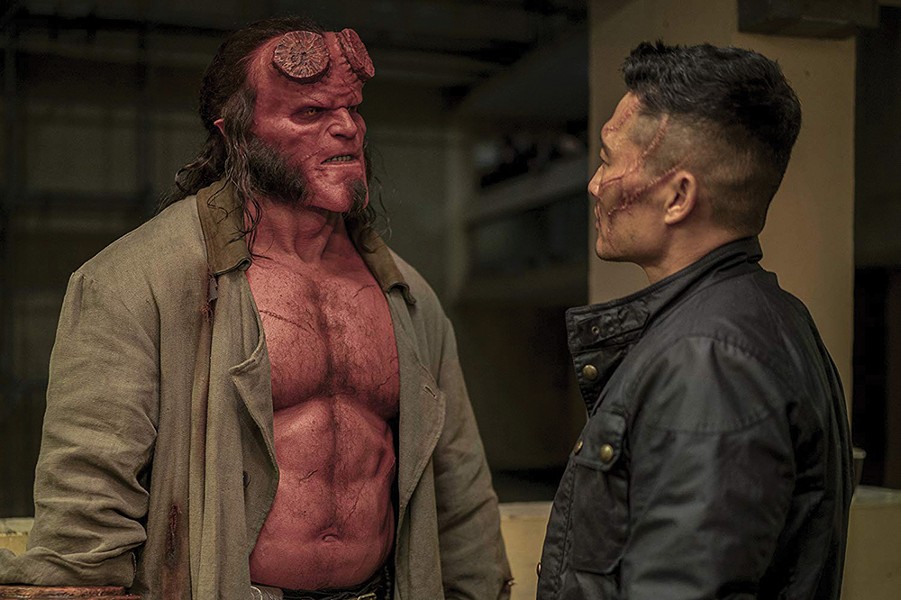 HELLBOY. Sometimes one wants simply to be entertained: to sit in a dark room and be distracted — transported, ideally, but that's asking a lot — by a fantastical world of someone else's imagining. I found myself in that mood this past weekend and thought Hellboy might do the job.

Now I'll roll out the drinks-cart of disclaimers: I've not read Mike Mignola's comics; I've seen Guillermo del Toro's previous adaptations thereof (Hellboy, 2004 and Hellboy and the Golden Army, 2008) and, as much as I recall enjoying them, they aren't perennial favorites. So aside from admiring del Toro as a visionary and a stylist, I don't really have a dog in the fight as far as preconceived notions about this reboot.

I did not set out to over-burden the new Hellboy, directed by Neil Marshall from a screenplay by Andrew Cosby, with unfair expectations. I came to the theater looking for a good time and for a while I was having one. Then I wasn't anymore.

Rumor around the campfire was del Toro, et al. had been trying to secure financing for a third installment of their Hellboy arc for some years. Obviously, that was unsuccessful and the failure to do so apparently created a void in the marketplace that I never would have thought existed. Rather than continuing the existing cinematic narrative of the character, the powers that be decided we were all ready for a new comic book tentpole series about a Nazi-conjured baby demon who grew up to be a bumbling, hard-living paranormal detective in the midst of a midlife crisis. Which sounds like something I could get on board with but I don't think I speak for most. In hindsight, I wonder if those powers that be considered whether now is this movie's moment, especially set against the MCU calendar, stretching as it does to the horizon and beyond.

Anyway, this re-imagining sets out to re-tell Hellboy's (David Harbour) origin story (the Nazi conjuring part) while pitting him against the recently reconstituted Blood Queen Nimue (Milla Jovovich), who was hacked into pieces roughly 1,500 years ago by King Arthur (Mark Stanley) and Merlin (Brian Gleeson), said pieces subsequently being locked away in separate boxes scattered all over England. He struggles with his relationship with his taskmaster father Professor Broom (Ian McShane), his British paranormal intelligence operative babysitter Major Ben Daimio (Daniel Dae Kim) and a 20-something seer whose life he saved when she was an infant (Sasha Lane). Hellboy also has to contend with a vampire, an ancient British occult society, marauding giants, a captive child-eating witch and his own existential crisis, given a prophecy that he, Hellboy, will bring the end of humanity when he fulfills his destiny. Sound like a lot? It is. Too much.

Marshall is an indie-fringe horror director of some regard (Dog Soldiers, 2002; The Descent, 2005). He must have thrown the sum-total of it at this project, though, replete as it is with blood by the barrelful, Raimi-esque kineticism and a hard rock soundtrack. It seems promising at first, but as the narrative moves deeper into its British mythology, the color palette becomes more dismal, the music recedes into the background and the whole thing becomes an unfortunate showcase for the competent but uninspired CGI. Harbour carries the lead with some aplomb but doesn't do much with the character that Ron Perlman (and del Toro's superlative creature team) didn't hand off to him. (I guess maybe I lied about preconceived notions). R. 121M. BROADWAY, FORTUNA, MILL CREEK, MINOR. 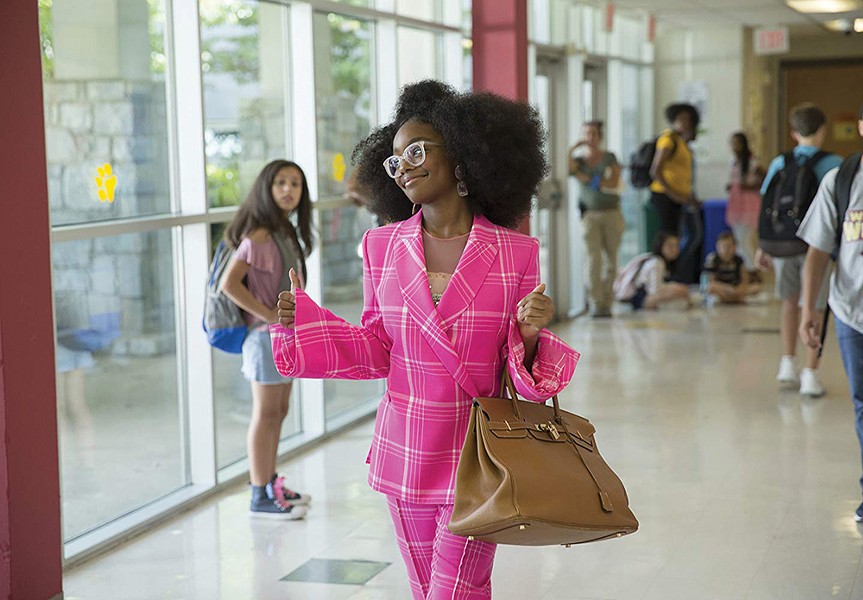 LITTLE. And speaking guiltily of preconceived notions, we have the confounding case of Little, another victim of an exquisitely assembled trailer that I laughed aloud at and used as fodder for hope. That was a mistake.

While Little certainly contains the inspired, hilarious moments of the trailer, the rest is mostly filler, unnecessary sentimentality and airless atmosphere conveying an on-the-nose message about the importance of kindness (of which, for the record, I'm a big fan).

Jordan Sanders (Regina Hall) had a rough adolescence: Smart and a little awkward, she was an easy target for bullies. That experience hardened her against the world, setting her an ambitious path, consequences to relationships be damned. CEO of her own successful mid-level tech company in Atlanta, she has a dazzling wardrobe and an elegantly appointed penthouse overlooking the city. She drives a BMW i8 and carries an expensive bag, and everybody hates her because she's so mean. Everyone except her boy-toy Trevor (Luke James), who wishes he could be more, and her long-suffering assistant April (Issa Rae), who becomes her stand-in and only help when Jordan is magically reverted to her 13-year-old self.

And that's about the long and short of it. Marsai Martin, credited as Little Jordan Sanders, gives a performance of significant range and depth, sharing a couple of particularly funny moments with Justin Hartley. Regina Hall is near-perfect but doesn't get nearly enough screen-time.

The kindness and humor infusing this thing make for a perfect starting point, but the movie built around them feels too unformed and wandering to truly work. PG13. 109M. BROADWAY.

THE BEACH BUM. This comedy about a stoner novelist starring Matthew McConaughey and Snoop Dogg might just be footage of them living their lives. In Smell-O-Vision. MINOR.

BREAKTHROUGH. Drama about a boy whose pulse returned an hour after drowning, apparently through the power of prayer. Starring Chrissy Metz. PG. 116M. BROADWAY.

THE MUSTANG. A violent prisoner (Matthias Schoenaerts) changes himself by learning to break horses. With Bruce Dern. R. 96M. MINOR.

PENGUINS. Ed Helms narrates a Disney Nature movie about Steve the penguin finding a mate, building a nest and raising a family in the Arctic. G. 76M. BROADWAY, MILL CREEK.

APOLLO 11. Documentary about the moon mission with Neil Armstong, Michael Collins and Buzz Aldrin, who will apparently still punch you in the face if you insist it was faked. G. 93M. MINIPLEX.

BABYLON (1980). A time capsule of youth culture and reggae music in West London in the 1980s that follows a mechanic/musician on a losing streak amid poverty and racism. NR. 95M. MINIPLEX.

US. Writer/director Jordan Peele's excellent, genre-expanding horror movie about a family beset by their creepy doubles is a grotesque dance with the self and the other that also manages charm and humor. Starring Lupita Nyong'o and Winston Duke. R. BROADWAY.