Sara Milonovich and Greg Anderson at the Arcata Playhouse 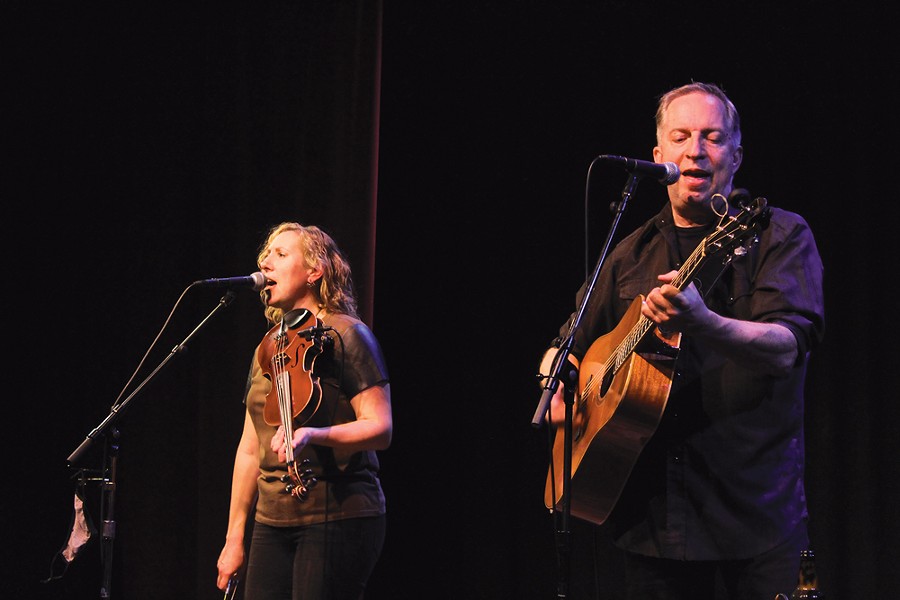 Lately I've been focusing on small graces and pleasures: a walk in nature with a loved one, a good meal, seeing a cool bird, or reading something full of brilliance and (maybe a bit too much) hope, like Kim Stanley Robinson's excellent novel The Ministry for the Future. Even a chance meeting with an old friend has the potential for a weighted burst of meaning and emotion these days. I met one recently whom I hadn't seen since she barely survived a tough pregnancy last year, and shooting the shit with her again was an experience that haunted me with its humble purity. There is so much that is wrong with our path as a nation, as a species, as moral and ethical beings, that nearly anything that isn't greasing the skids of annihilation can contain a gloriously delicate and effervescent beauty like butterfly dust. As Leonard Cohen said, "Even damnation is poisoned with rainbows."

So it was in that headstate that I agreed to attend the first touring act show at the Arcata Playhouse since this rotten pandemic got loose. As with my experience at the Eureka Symphony, I'm only reviewing shows with a mask and vax card policy. The people at the playhouse had that together nicely for the Nov. 12 show, so I settled in for an evening with two musicians I had never heard before: singer, songwriter and fiddle player Sara Milonovich and her musical partner, guitarist Greg Anderson. Prior to the age of COVID, my relationship with folk and bluegrass was one of constant saturation; it's everywhere around these parts. You can't swing a cat (I would never) without hitting a folk musician. And while there are definitely some incredibly talented workers of the form, it's unusual for the stuff to grab my attention for very long. Truth be told, I've always been more of a jazz, punk and metal guy.

However, there was something in the energy of the room that night, if only because we were there in the audience again and seeing a touring act. Playhouse honcho Jacqueline Dandeneau certainly seemed to feel it in her emotional introduction to the evening, and the audience was very tuned in to the notion that this might be something special. As it turned out, it was indeed.

Early in the set, Milonovich broke whatever tension was in the air due to the circumstances of plague life by thanking us for being so receptive and agreeable. A woman's voice came out of the darkness behind me, saying, "We're so happy to hear lovely live music again." Amen to that, sister.

Milonovich and Anderson played superbly, noticeably settling in after a warm-up with the first couple of numbers. Milonovich is a world class fiddler and very talented singer, and her accompanist has a simple versatility with the acoustic guitar that sounds a lot easier than it is to accomplish. These musicians are obvious lifers. That life takes place mainly, we were told during one of Milonovich's many stories and interactions with the audience, in the Hudson River Valley, around the town of Beacon, New York. Over the course of two hearty sets bifurcated by a nice intermission, she sang songs about love and loss, death and survival, the Hudson River and Interstate 87. The setlist drew heavily from her latest release, Northeast, a record full of the lively fiddle-work of bluegrass and the gentle country ruminations of contemporary folk. At one point she laughed about the dreadfully high body count of the former genre's murder ballad-filled music, noting, "A bluegrass song is not a safe place for a woman." She suggested that major keys and speedy tempos were the secret delivery system for morose and violent lyrics. The banter was great and the two performers seemed to feel at ease talking to each other and at us. Milonovich noted that this was their first road show since the pandemic began but that she would bury her emotions to a presentable level because she had forgotten to pack "the waterproof mascara."

For me there were two unmistakable highlights of the evening and they were both covers: A sad and spooky version of Hurray for the Riff Raff's "The Body Electric," and an absolutely meteoric interpretation of Led Zeppelin's "Friends," the penultimate performance position of which left a crater no encore could hope to fill. It's a state I have often felt before, blissed-out during moments of live music fusillades at much heavier shows.

I went home that evening feeling about as good as I have for as far back as I can recall — the brain-muddling fog of this current world of ours is a very real phenomenon. Nothing has been solved, or resolved, and we are all still living in a precarious position in an ugly world of human corruption, violence and venality. However, if those little joys and graces, which floated out during the show in abundance like the spitting embers of a midnight campfire, can do anything, they can warm us and they can bring us light. And miracle of miracles, as I write this right now, I can still feel a bit of that warming illumination. The performers, the audience and the good people at the Arcata Playhouse have my thanks.

Collin Yeo (he/him) has finished writing and is now feeding the cats, who have apparently been in a near-death state of starvation since breakfast. He lives in Arcata with his feline overlords.