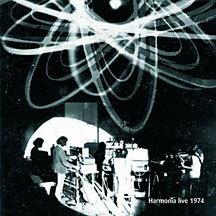 According to tales of rock lore, Brian Eno once proclaimed Harmonia to be the most important band in rock music. That's an impressive endorsement, especially considering that Eno is widely recognized as part of the brain trust behind the careers of some of rock's biggest names: David Bowie, Talking Heads and U2, among the most notable.

Harmonia was part of the Krautrock movement, an experimental music scene that grew out of Germany in the late '60s and early '70s. For the uninitiated, the music is largely electronic and instrumental and has an affinity for lengthy compositions. The purveyors of the genre attempted to blur and expand traditional rock structures by opening up into more psychedelic, progressive and freeform approaches. Instead of a reliance on conventional backbeat and rhythm, for example, the music often focused more on sound textures, ambiance or motor-like rhythms to carry the listener forward. Consisting of members from other well-established Krautrock acts including Neu!, Kraftwerk and Cluster, Harmonia released two albums, Musik Von Harmonia in 1974 and De Luxein 1975, before splitting up to pursue other projects.

Live 1974 is an exceptional piece of recorded music history, for it lay undocumented for almost 25 years. Recorded at the Penny Station Club, a former German railway station, the album not only offers a rare glimpse of Krautrock in performance but also makes public five previously unreleased compositions. The fact that the tracks exist nowhere else in Harmonia's discography suggests that the songs are truly improvised creations, thus increasing the value of their discovery in rock's dusty annals.

Musically, Harmonia centers their attention on the building of drifting soundscapes that are created by looping synthesizer passages and guided by the pulse of a primitive drum machine. Like most works from the genre, textured feedback and repetition are used judiciously and go a long way in establishing mood. And while the ebb and flow of subtle rhythms make it easy to lose oneself in daydream bliss, there's just enough weaving and streaming of spacey guitar work to prevent the listening experience from being completely passive.

What is most impressive about Live 1974 is its ability to capture the quality and depth of Harmonia's sound, an accomplishment that cannot be overlooked when considering the limits of recording technology at the time. Take a look at the cover and direct your eyes to the band's equipment. You get an indication of how labor intensive their music-making process must have been. Also of note is the fact that it is difficult to recognize this album as a live recording, for there is a noticeable lack of audience presence. And as one band member, Michael Rother, suggests, "the lack of applause and noise wasn't because of audience indifference but because every member of the crowd is either stoned ['no incense sticks though,' reassures Rother] or because they couldn't decipher when one 10-minute epic started and another finished."

Ironically, Krautrock's acclaim was more widespread in countries like England than it was in its native Germany. And while it was heavily promoted by the likes of Eno and the BBC's John Peel, it never really gained much commercial appeal. Nonetheless, through its influence on today's post-rock, techno and electronic music scenes, Krautrock has managed to stay relevant and enjoy a surge in popularity and critical recognition, complete with well-received Harmonia reissues and reunion appearances.

For those tempted to venture into the shift-shaping worlds of Harmonia, or Krautrock in general, Live 1974 is as good a place as any to begin such an endeavor.