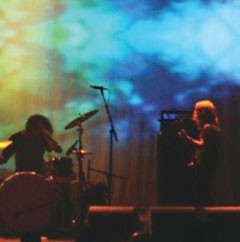 Over the past three years, San Diego's Earthless has steadily built a following based on the strength of its intense live performances and absurdly long, yet captivating, instrumental jams. Its reputation earned it an invitation to this year's annual Roadburn Festival in Holland, where organizers unexpectedly asked Earthless to perform on the festival's main stage, as the evening's headlining act had failed to fill the allotted two-hour slot. The band gladly agreed, as Live at Roadburn documents.

Live albums are often just filler in a band's catalog. However, that idea is nullified by the fact this album opens with two previously unreleased pieces. The first, "Blue," showcases the band's ability to take a more improvisational approach to its craft, slowly building its way through a variety of loose rhythms and solos before kicking into tube-ridden overdrive and all of the excesses we have learned to love about ’70s-style guitar rock: the bends, the echoes, the loops, and of course the rapid-fire sound of phasers shooting across the sky. Earthless barely draws a breath before launching into "From the Ages," a much more gritty rhythm-driven affair that again allows the band to wander off into some cosmic, tangential explorations. For those accustomed to a more structured presentation from the band, the first couple of listens may be a bit off-putting, but it's interesting to hear these tracks in development and wonder what form they'll take when the band gets a formal studio recording, if indeed they do.

Oddly enough, the one weakness of this album lies in something that isn't heard, as about 10 minutes are cut from the end of "From the Ages." Having tracked down and listened to the uncut version, I can't imagine that the track was edited because the band was unhappy with its performance, for I would argue that the missing minutes are crucial in capturing the mood and energy of the set. My assumption, then, is the fade and splice was done in the interests of paring down for the album's vinyl release.

That unfortunate decision doesn't detract from the album's success in capturing Earthless in its natural live setting. And if there's one thing to be taken away from Live at Roadburn, it's that despite all of the guitar heroics, Mario Rubalcaba's drumming is what truly guides this band. If you've heard Earthless live, it's an easy realization to make. But it's not something that's always translated to the band's studio efforts. Thanks to a production job that pushes Rubalcaba up in the mix, these live versions of the familiar "Godspeed" and "Sonic Prayer" take on an added dimension, one that both highlights Rubalcaba's virtuosity and properly characterizes the live Earthless experience.