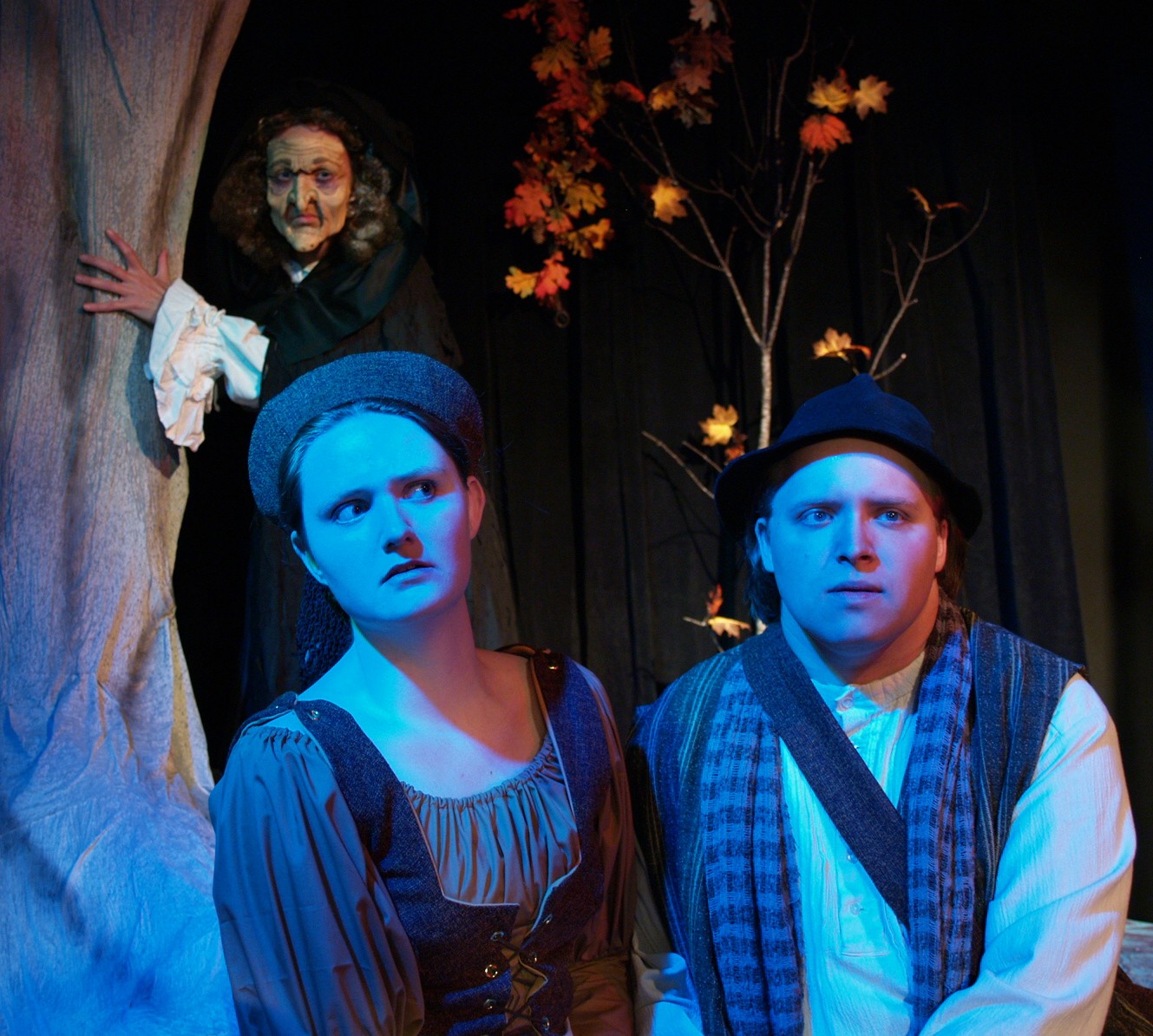 Another opening, another Sondheim musical. For the current North Coast Repertory Theatre production of Sondheim's Into the Woods, Calder Johnson's wide and mostly open set, festooned with woodsy red leaves, signals an airy difference from the cramped and dark London of Sondheim's Sweeney Todd, as produced last month at Ferndale Rep. This is a brighter sort of show, with more motion and humor, and even some dancing. Nevertheless there is darkness in these woods, and in the fates and hearts of these characters.

Fairytales are the starting point for Into the Woods. There is a linking story -- of a baker (played by Evan Needham) and his wife (Megan Johnson) whose desire for a child is being thwarted by a witch (Andrea Zvaleko). The witch's demands send the couple on a quest that conveniently involves archetypal fairytale characters: Little Red Riding Hood (Katy Curtis), Cinderella (Molly Severdia), Rapunzel (Caitlin McMurtry) and Jack, of Beanstalk fame (Riley McFarland).

Leave it to Sondheim (music and lyrics) and James Lapine (book) to restore the grimmer aspects to the often-sanitized Grimm fairytales. There's also some wicked humor in how they update the characters. Little Red Riding Hood is shyly and then slyly attracted to wolfishness.  Though Cinderella easily wins her Prince Charming, she is blankly disenchanted with her happily ever after. But the ironies have a light touch, even when suggesting some moral confusion in the supposed morals of the fairytales.

The old tales wind up more or less where we remember them as the first act ends, but things become unhinged with further developments in Act II. Morals are even harder to come by, and when the Giant's giant mate comes seeking revenge for Jack's pillaging and the Giant's death, the characters argue over whose fault it all is. A society collapsing from the consequences of its unthinking actions is probably the show's most relevant and unsettling suggestion.

Director Adina Lawson keeps a crisp pace and a large cast in motion, without sacrificing clarity. Some of the complex lyrics get lost in ensemble numbers, but the major moments are front and center. Megan Johnson in particular takes command of the stage for her big second act number. Molly Severdia and Katy Curtis make the most of their roles, young Riley McFarland is an appealing new presence, and Caitlin McMurtry showcases another of her mesmerizing talents -- a bloodcurdling scream.

Keili Marble (who also handled the neat choreography) does wonders with her silent role as Milky White, while Andrea Zvaleko effects a memorable transformation. The entire cast performs well, individually and as a unit, including Anders Carlson, Antonio Waller, Luke Sikora, Chyna Dale, Laureen Savage, Emily Chand and Jason Chand (among others).  Craig Klapman plays a genial narrator who gets offed by the characters -- one of many suggestions that postmodern deconstruction was as much an influence on this play as Bruno Bettleheim's psychological study of fairytales, The Uses of Enchantment.

As in much of Sondheim, the lyrics are clever and the music fitfully attractive. The character moments in this production are mostly the musical comedy kind, and in general the treatment is efficient and superficial. I've seen this script done with more emotional impact. The story as presented has the peculiar logic of fairy tales, with events that would otherwise seem arbitrary but may be symbolic or otherwise meaningful. That approach combined with writer Lapine's purposeful jumble of incident and accident results in a spectacle of moments, a collage of fairytale tweets.

I saw this with a young audience, and this production does seem particularly appropriate for children who may enjoy seeing the fairytale characters, as well as grade school and high school students ready to revisit them on a different level. These audiences -- and others -- may also thrill to a big live musical done with such enthusiasm and skill.

Into the Woods continues at North Coast Rep in Eureka through Oct. 15.