Living on the Water

In search of food for Passover 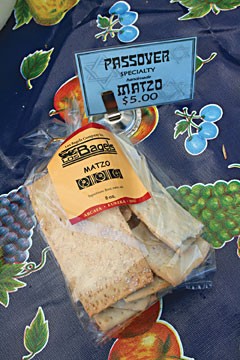 Stephanie Silva directed her own modern dance company in New York City and is a student of American poet Diane di Prima. She teaches movement and writing.

When I was 10 years old I came home with the rehearsed narration of a grown-up joke I had overheard. An impending flood of momentous proportions is about to engulf the Earth and her inhabitants. A roving reporter interviews citizens from around the world to ask how they will survive. In London, a Brit answers: "I will sit atop Big Ben, old chap." A Frenchmen replies: "I will climb ze Eiffel Tower, of course." (My aunt and uncle's chuckles reassured me that I was doing an entertaining job imitating the accents involved.) An Italian plans on scaling the Leaning Tower of Pisa: "Mama Mia!" When a Jew is asked he solemnly answers with a Yiddish inflection, "I guess ve vill have to learn to live on the water."

My audience burst out laughing, but I didn't get the joke. Aunt Linda explained that it was a stereotype that Jews will learn to make do, adapt, survive, even if that means living on the water.

That's been me living as a Jew in Humboldt County. I've learned to live in the rain and find means to celebrate the holidays without familiar brethren. Arriving from New York City five years ago, before joining Temple Beth El in Eureka, I felt a bit lost. I was a Jew and a New Yorker. Having loved living in Berkeley two decades ago, I didn't realize what an adjustment the move would be at this later stage in my life. During the holidays I felt especially lonely. The paper listed Community Seders, the ritual meal focused around the retelling of the Jews' Exodus from Egypt, but I wasn't ready to venture there. I wanted to make my own Seder for my new Gentile husband, and in the following years for friends and the son we would come to adopt. These feasts came to be memorable occasions in our home.

Navigating the shopping for special Passover foods for these meals has been an inconsistent endeavor. Some years items seemed plentiful, others scant. That initial season my first stop was Los Bagels,where I purchased scrumptious homemade matzo and chocolate coconut macaroons for the Seder. A few days into Passover I went back to the shop and ordered a Mexican mocha and matzo with cream cheese — and discovered that the unleavened bread, central to this ancient feast, could only be bought in a package; it wasn't served in the store. It seemed reasonable that a Jewish-identified store would offer an unleavened option on its menu during the holiday. There were the wonderful macaroons, but that wasn't lunch. I was frustrated. I couldn't eat a bagel for four more days.

That year the Co-op had an island of Passover boxed mixes, but instead of the Passover favorite potato kugel there was potato latke mix, which can be eaten any time of year but is traditionally a Hanukah food. The next year, rather than create a special place for the holiday, the Passover foods were on the shelf with all the other Jewish foods in the ethnic section, which was disappointing. Of late, the island has been restored.

Last year when I went to Safeway in Arcata on the second day of the holiday the store's holiday supplies were wiped out. In a panic I rushed over to Wildberries, where I'd bought Kosher wine and Joya chocolate-covered jellyrolls in years past, and, to my dismay, could not find a Passover section. The shift manager was surprised when I went to him with my problem. He took me to the front of the store, where a Passover section had stood the day before. We found that the Jewish foods had been returned to their regular spot. He was quite apologetic, surmising another manager must not have realized that Passover hadn't ended.

For the record: Passover lasts eight days and isn't a fasting holiday. We Israelites not only eat for the whole week, we pretty much feast all week, on special foods.

The purpose of this piece is not to kvetch (complain), but to alert local markets and restaurants how to help celebrate this holiday that rejoices freedom from slavery. Historically, the Hebrews were enslaved by the Egyptians (the pyramids did not build themselves). As the story is told, God sent seven plagues upon the Egyptians to convince them to free the Israelites — the last, the slaying of the first born of all Egyptian sons. God commanded the Jews to put a mark of lamb's blood over their doors, which would signify their homes as Jewish homes, which he would pass overas he sent death into the homes of the slaveholders.

In a fit of despair, after losing his own child to the plague, Pharaoh freed the Jews, who did not need to be told twice. They hightailed it out of there before the bread dough had time to rise, thus the unleavened bread we eat to signify our time in bondage: the matzo, the bread of affliction.

I love being a Jew for many reasons, one of the deepest being the choices it gives me in how I choose to worship. There's history, mythology and faith. I'm not too big on an angry God causing suffering to the enemies' children part, but I love the retelling of our emancipation trek across the desert, with an angry Pharaoh's army at our heels, the parting of the Red Sea, and so on. The Jews, like countless other peoples across the wide expanse of human history, have been cruelly enslaved. And like others before them, their faith helped them endure toward freedom. Commemorating this common human tale through the sharing of most basic human sustenance, food and community, renews the hope for succor and freedom for all people.

Although traditional dishes may be made from scratch, keep in mind that there are eight days of meals to be eaten. I like to make a potato kugel for the first night — it still isn't as good as Grandma Goodman's — and I'll whip up one from the box later in the week. Matzo varieties include whole wheat, yolk-free and chocolate covered. Jarred gefilte fish, matzo ball soup and borscht are staples. Matzo balls are deliciously satisfying dumplings made from matzo meal. I use a RosieorRockychicken or Imagine's no-chicken broth for my base and add carrots, seasonings and matzo balls made from a mix, using my Aunt Linda's advice to "add a little seltzer to make them fluffy."

Restaurants and cafes could easily offer up a few Passover dishes. Including boxed or Los Bagels' matzo as an alternative to toast with breakfast plates, or as a side with cream cheese and lox, would bring a smile to many a local observer. This year I plan on going to my local coffee shop, The Beachcomber in Trinidad, armed with recipes for macaroons and other flourless pastries. The proprietors are three charming young women who I hope won't be able to resist joining in on this holiday fare. Add a macaroon, a flourless cake or a matzo apple kugel to the menu and you've got a customer for life. Recipes can be found on the web at Manischewitz.com and Kaboose.com. Or simply Google Passover recipes; a plethora of additional sites can be found.

Matzo Brei, a crusty egg dish, is easy to make. My Grandpa Goodman cooked it in his Brooklyn kitchen especially for me. He served it with jelly, but it's equally yummy with sour cream or applesauce. I began making it myself last year using a recipe from The New York Times Passover Cookbook.

This seminal tome, edited by Linda Amster, includes traditional recipes along with contemporary fare. Noteworthy chefs and authors like former Timesrestaurant critic Ruth Reichl contribute memorable essays. I nod in agreement when she recognizes the universality of Passover by asking, "Is there any other religion whose central ceremony requires identification with the oppressed?"

The history of religious and scholarly traditions and interpretations regarding Passover runs deep. Following tradition as best I can, while creating new rituals with my family and friends, has become a communal way to celebrate the changing the seasons, those of the year and those of the human heart. At Seder my family leaves the door open to share our bounty with any who are hungry. May our children live to see the day where the slavery stories and the hunger stories are only that, stories from a distant past.

1 teaspoon salt, or to taste

Bring water to boil and pour over matzos. Drain immediately through sieve or colander. It is not necessary to stir the matzo or to let them stand. They should be only very slightly moistened, not soggy. Drain thoroughly and return to bowl.

Toss lightly with fork until all matzo pieces are well coated with egg and seasonings are evenly distributed. Do not mix or stir vigorously. Matzos should not be broken up more than necessary.

Heat butter over medium flame until hot and bubbling (not brown) in heavy 10-12-inch skillet, preferably of black iron.

Turn matzo mixture into the skillet and fry.

When the underside begins to brown, turn in sections with spatula.

Keep turning until all sides are light golden brown. It is not necessary, or even desirable, to keep a pancake shape. A jumble of pieces, some golden brown contrasted with others that are slightly golden and tender, is ideal. Total frying time will be about 10 minutes.

Check seasoning once done frying and adjust as needed.

Serve on a heated platter or on individual plates.

Note: For a sweeter brei, reduce amount of black pepper, and sprinkle matzo brei with sugar or cinnamon sugar immediately after it is plated. Jam is a good accompaniment to sweeter brei.