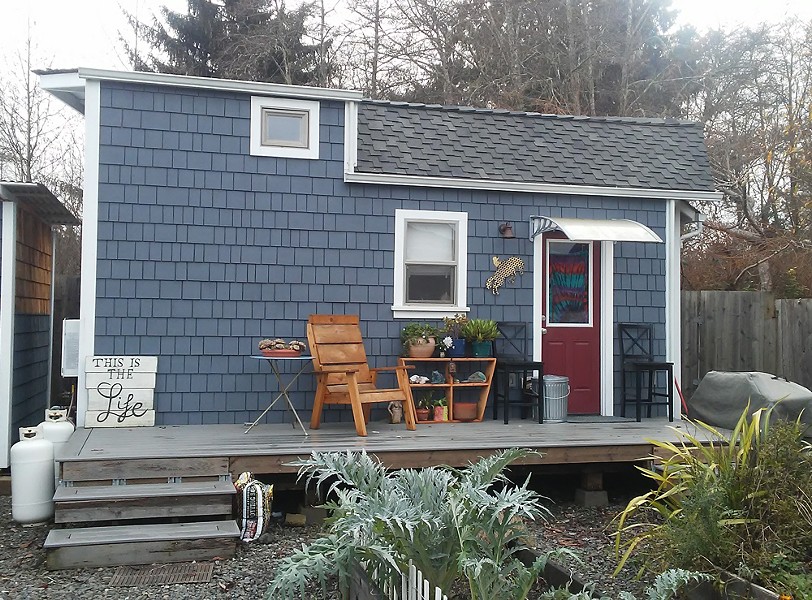 Our life is frittered away by detail ... Simplify, simplify.

I lived in my first tiny house — so to speak — in the mid-1980s when I was 27. It was in San Francisco, where I was working as a graphic artist, and I was getting tired of rising rents. So I bought a Chevy Stepvan that had formerly been used as a bread delivery truck, had a boyfriend build a plywood wall with a door in it behind the driver and passenger seats, put a mattress on a platform in the back, bought a propane light and a propane camp stove. Then I moved in, decorating it with colorful scarves and New Age artwork. I used public restrooms, took showers at my boyfriend's apartment and made my phone calls from work.

I wrote a letter that was published in the San Francisco Chronicle differentiating myself from those who had no housing options except their vehicles, as I and a handful of other van and bus dwellers I'd met had made small or nomadic living a choice. My letter was titled, "It's My Home."

I didn't want to travel anywhere. I had a job I enjoyed and I lived in a city I loved. I just didn't want to pay rent and be tied down with lots of stuff.

For about six months, I moved my home-on-wheels every couple days to different parts of the city and never got into trouble. I'd cook brown rice and miso soup on my little camp stove while cars whooshed by just feet away. I felt cozy and self-righteous. But I sold it after returning from a vacation in Mexico with my boyfriend. Rather than driving it there, I'd kept it in a friend's driveway and came back during rainy season to find everything inside damp and mildewy. So that was the end of "vehicle-as-tiny-house" living for me.

In the late 1990s, a man named Jay Shafer from Sonoma County began a company called Tiny Tumbleweed Houses that built and sold tiny homes, some on wheels, which are defined as being 400 square feet or less. Shafer built some that were smaller than 100. Although many credit him as the "godfather" of the tiny house movement, others argue the concept of simple living began with the publication of Henry David Thoreau's 1854 Walden, chronicling his two years spent in a small cabin in the woods; this became for him both a social and spiritual experiment.

I'd stumbled onto Shafer's website in my early days of using the internet and became fixated. Those little houses were just so darned cute. But it wasn't the time for me to buy one. By then, around 1999, I was a single mom caring for foster kids and for my own, as well. My 900-square-foot home in Berkeley, considered small by most standards, was bursting to the brim with humans and their stuff. But I never forgot my dream of living less encumbered.

Fast forward to the beginning of the pandemic.

Having relocated to Humboldt County in 2015, I'd settled into another small house, though not a tiny one. Retired and with time on my hands, I began downsizing.

It wasn't as if my closets were bursting at the seams. Not by a longshot. I'd already gotten rid of a lot of possessions when I'd moved north from the Bay Area, and with a subsequent move within the county. But in methodically sorting through every single thing I owned, I discovered a much needed sense of continuity and purpose. Things had begun to feel increasingly surreal by then: the political landscape, enforced business closures ... 4 year olds in masks who couldn't go to the park or touch their friends.

I started getting a little carried away. Opening my silverware drawer one day, I counted 11 forks. Eleven! Well, for one thing, an odd number simply wouldn't do. I certainly didn't need more than six. Make that four. Even when I wasn't practically living in exile due to the pandemic, I rarely entertained. I removed the "extras," then pulled out other extraneous silverware, too, and began filling another giveaway bag.

As the months passed and the roller coaster of politics plus pandemic took its toll on me emotionally, downsizing became my go-to mood enhancing activity. It metaphorically lightened all the darkness and uncertainty.

Japanese author Marie Kondo, in her trendy book The Life-Changing Magic of Tidying Up, invites readers to ascertain whether possessions even as mundane as a pair of socks generate a "spark of joy" — hence the decision to discard or not. While I chose not to analyze every object's psychological effects on me, I happily filled a dozen or so bags and boxes with all manner of things I was pretty sure I'd never miss after they were gone. I even went through some of my portfolios and threw out a lot of artwork, although with my old paintings and drawings I did silently question whether looking at them gave me a "spark of joy." If the answer was "no," away they went.

As I puttered around finding more and more things to throw away or re-home, the radio droning in the background with increasingly dire news about the pandemic, I began thinking about death. There's a concept known as "death cleaning" that comes from the Swedish word döstädning. In her book The Gentle Art of Swedish Death Cleaning, author Margareta Magnusson extols the virtues of culling one's possessions prior to their demise in order to simplify the amount of work tasked for loved ones when the end comes.

While the idea of Magnusson's book, if not the process, somewhat parallels The Life-Changing Magic of Tidying Up, the latter focuses on the immediate sense of gratification that can be achieved by letting go of stuff. I needed that magic.

After I'd donated, sold or given away just about everything I felt I could part with, my small house felt too roomy. So I decided to buy a genuinely tiny house, pursuing the misty-edged dream I'd held onto since I'd discovered Shafer's "Tiny Tumbleweed Houses" about 20 years earlier. Purchasing my 270-square-foot tiny house from a contractor-friend who'd built it, I put my not-so-tiny one on the market and within six weeks it was under contract.

The week I moved into my "dollhouse," COVID cases were shattering daily records and horrifying events were unfolding in our nation's Capitol. With the agreement that I could reside in the tiny house in its current location (tucked away in back of the property on which it was built) until I found a preferable place to relocate, I'd packed all my possessions in my Ford pickup with no help and driven 30 miles north to my new (moveable) abode. There was no need for a return trip as there was nothing left to bring.

"She's got everything she needs, she's an artist, she don't look back."

So sang Bob Dylan in his 1965 song, "She Belongs to Me," and that line has always resonated. Over and over it played in my mind as I settled into my tiny house. In the weeks before I moved, I'd already mentally decorated it with my colorful artwork, Christmas lights, mirrors, cushions, an inflatable mattress, an electric heater that looks like a wood stove, candles and more. I knew where I'd set my goldfish bowl, hang my ukulele and stash my guitar and art supplies. I knew what I'd grow in the planter boxes that came with the house, and I also knew there'd be no need to store anything in the included shed. I knew I wouldn't feel like the house was too small because I'd already lived small.

It's important to note that I don't take my privilege for granted. I realize some people have no choice but to reside in small, cramped spaces, or have no home at all. And while few with the wherewithal would ever choose to live in a house not much bigger than a large bathroom (let alone in a vehicle the size of a small one), I guess I'm not most people.

But, like most of us, I have dreams, and there's something inherently satisfying about realizing one, especially at a time when, for me, I've forgotten what a hug feels like; I hold my breath waiting to see if an elderly aunt will survive COVID; I reel from watching American politics turn somersaults faster than I can keep track.

It's so peaceful in my tiny house. Sunlight streams through the loft windows and I sip coffee, watching my goldfish shimmer and swish in their tiny house. I'm exactly where I'm meant to be.

Annie Kassof (she/her) is an artist and freelance writer living in Humboldt County.