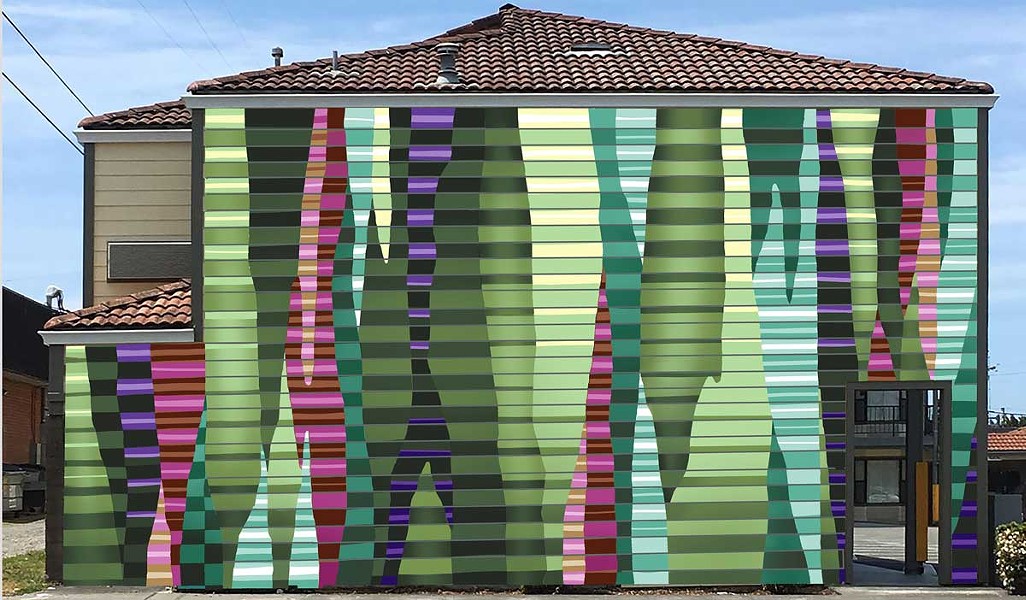 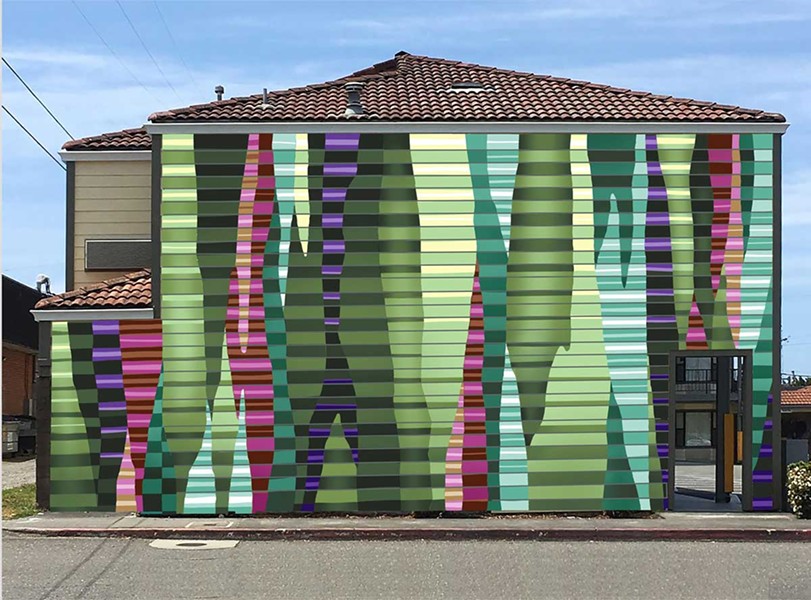 Courtesy of the artist A prototype for "Living Wall," XAVI's planned mural to be painted Aug. 11 through 18 on the Rodeway Inn at 2014 Fourth St. in Eureka.

One of my favorite things about it is the way I am going to be able to use the inherent features of the wall to my advantage," said Ashland-based street artist XAVI. He was talking about "Living Wall," the mural he will be painting on the side of the Rodeway Inn in Old Town Eureka as part of the Eureka Street Art Festival from Aug. 11 through 18.

The title refers to the chic, vertically oriented gardens that have gained popularity throughout the design world in recent years (see, for instance, the giant one designed by David Brenner of Habitat Horticulture as part of the 2016 SFMOMA renovation). Eco-conscious without being literal, the design is both purely abstract and on-trend.

"The side of the wall has these raised horizontal slats, which typically would not be considered advantageous," the artist continued. The mural surface exists on two planes, separated by perhaps an inch of depth. The proposed design plays with this shallow space, overlapping the wall's corrugated surfaces with bands of contrasting color until it becomes hard to tell the difference between pockets of illusory depth and real relief. When the mural is complete, the corrugated surface will be alternately accented and camouflaged by groups of horizontal bands that flicker throughout the composition like static on an old TV.

When XAVI described his design as "a wall of succulents," it was easy to see what he meant. Picture a field of rosette-shaped green plants with shiny, fleshy leaves, expanding past vision's limits. Then imagine those pointy leaves abstracted, liquefied and smeared. Drawn out vertically into sleek organic forms in related shades of green in the mock-up image the artist sent me, they appear to vibrate their way up and down a 20-foot wall.

XAVI, also known as Xavi Panneton, came up in the Washington D.C. graffiti scene of the early 1990s, working in San Francisco for a decade before his recent move to Oregon. He developed the signature style he calls "West Coast visionary art" in the Bay Area, using acrylic spray paint and aerosols to create dense patterns, vivid colors and hypnotically intense linear passages that look like motifs from a contemporary Californian vision quest.

Panneton's graphic work is influenced by San Francisco's storied hippie past, especially the classic psychedelic styles originated in the 1960s by rock concert poster designers like Rick Griffin, Alton Kelley, Stanley Mouse, Victor Moscoso and Wes Wilson. It seems distinctly millennial in spirit, though — more Burning Man than Woodstock. The detail-oriented work of Alex Grey and other visionary artists popular on the contemporary festival circuit is an important reference. And the design process involves both digital manipulation and handicraft. In a statement, the artist writes that he hopes his work will "expand minds," adding that he tries to make images that connect with viewers "where design meets the uncharted territory of our collective consciousness."

Panneton executed his first mural in a friend's bedroom at the age of 14. "I knew I was going to be a commercial artist from a very young age," he said. "And I also realized at a young age that art is something that is applied in the world. As an artist, growing up, I was totally informed by the graphics of the era I grew up in — by the skateboarding and graffiti stuff that was out there in the street. I wasn't concerned with galleries, with waiting around for gatekeepers to say my art could be legit. I just wanted to go out and do it."

Panneton's past commissions have ranged widely, from embellishing a landmark Haight-Ashbury storefront with sacred geometries to transforming a hall in Google's Mountain View offices by reimagining it as a sequence of overlapping screens in refined psychedelic patterns. "For the building in Haight-Ashbury, I wanted to craft a design that was textually based in what was going on," the artist said. "It had to be an homage to the psychedelic history of the city, with a modern twist.

"But what's interesting is, the building on Haight Street is what got me the Google gig," he continued. "The people at Google saw that building and said, 'We want you to do a piece that celebrates San Francisco's psychedelic culture.' Nowadays, tech companies want that psychedelic look, too. They, also, fancy themselves creative and real."

Organized by Claire Reynolds and Kevin Bourque of Black Faun Gallery, along with Humboldt Cider Co. and the city of Eureka, the free Eureka Street Art Festival will feature murals painted live by XAVI and more than 15 other artists, many sponsored by local nonprofits. Contributors include San Francisco-based muralist and public arts educator Anna Sofia Amezcua; Dave van Patten, known locally from his design work for Humboldt Cider Co.; and Matt Beard, who lives in Humboldt and paints up and down the California coast. Photographs by Brian Tripp will be wheat pasted onto the Carson Block building as part of a collaboration with the Northern California Indian Development Council. Local nonprofit Centro Del Pueblo is sponsoring a piece by CIX, from Mexico City, and Bird Ally X will be sponsoring a mural by New York-based artist ELLE.

The festival represents the most ambitious multi-front incursion of public art into Eureka since the early aughts and XAVI is happy to be part of it. "I try to make a mural that's gonna resonate with its surroundings," he told me. "Using inspiration from nature is a great thing; you can abstract that and still have something that people can resonate with and relate to. Because people deserve that. It's like art that's in your living room, except even more so — this is art that's in everyone's space."

The Eureka Street Art Festival will be held August 11-18 in Old Town. During the festival, street art tours will be conducted daily at 5:30 p.m. A street party will be held to celebrate the murals' completion on Saturday, Aug. 18. For more information on participating artists' projects, see www.visiteureka.com/street-art-artists.