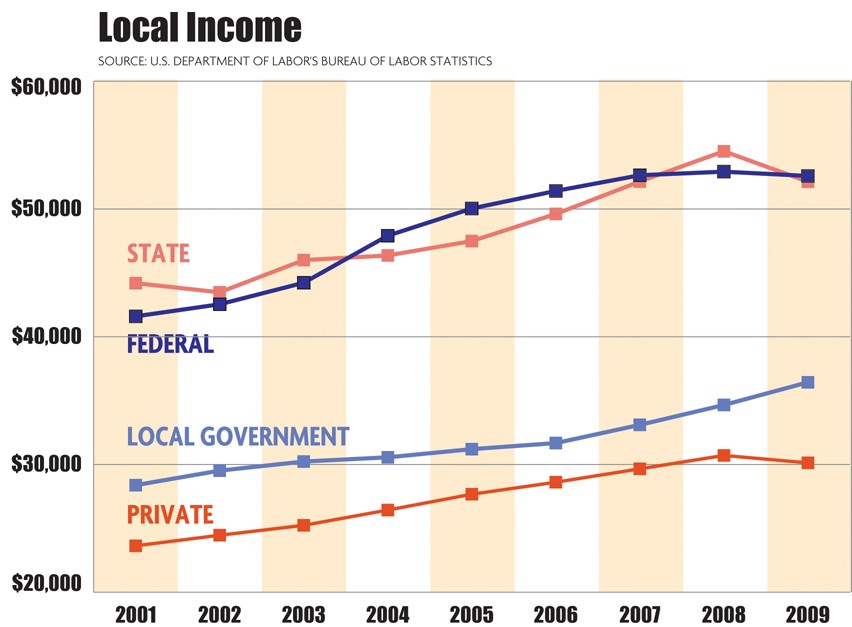 In Humboldt County, the public trough offers more vittles than the private sector. In 2009 (the most recent data available), the average salary for an employee of a local government (city or county) was $6,306 higher than that of a privately employed worker, according to the U.S. Department of Labor. State employees fared even better - their average salary here in Humboldt County was 73 percent higher than the private-sector average. More than one in four jobs locally is a government job, and roughly 70 percent of those come from local jurisdictions, according to the latest data from the California Employment Development Department. (And as this graph shows, local government workers somehow managed to avoid a salary drop in 2009.)

But before we break out the torches and pitchforks for our relatively affluent neighbors, remember that the true wealth lies elsewhere. Out of California's 58 counties, Humboldt ranked 50th in terms of median household income in 2008, according to the U.S. Census Bureau. We came in at just under $40,000 per household. Nineteen percent of us live in poverty. By comparison, Marin County - home to such heartless capitalists as George Lucas, Ram Dass and the late Tupac Shakur - had a median household income of $89,909. "Been livin' lavish like a playa all day."