Logicomix: An Epic Search for Truth 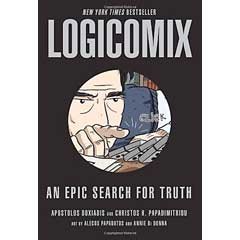 We all know the formula: The Protagonist, feeble and indistinct, gets accidentally exposed to radiation or some other freak scientific derivative. This in turn gives him supernatural powers, which he nobly uses to protect the public. Leading a duel life as an average man and superhero, he attracts the girl of his fancy, but is also kept from confessing his love for her. Internally struggling, he decides he's willing to give up his powers for love, however he must first overcome an enemy with unprecedented powers. Logicomix, a graphic novel based on the life of mathematician and philosopher Bertrand Russell, is figuratively similar, while able to skirt the cliché.

Authors Apostolos Doxiadis and Christos H. Papadimitriou, along with artists Alecos Papadatos and Anni Di Donna, deliver this story of a man's quest for truth with bold colors and bright ideas. Framing the story in Athens during the creation of the book deftly allows for the authors to step back whenever abstract concepts need more clarification. When they introduce Russell, he's addressing American anti-war protesters at the advent of WWII. He entices the protesters to step into a lecture hall where he relays the story within the story within the story by describing the events of his life that led up to his established philosophical identity.

Our superhero's goal is to discover mathematical truth. With the urgency of a man who believes the future of the world hinges on his discoveries, Russell proclaims, "I was now ready to battle against my own enemy... Irrationality, in its highest form." To prepare for this battle Russell sets out to meet some of his heroes of logic: Frege, Cantor, Gödel, Boole, and Whitehead.

Russell then conquers logic by presenting this paradox: Imagine there is a town with one barber, and where the law states that everyone who doesn't shave himself is shaved by the barber. Who shaves the barber? If he doesn't shave himself, he shaves himself, and if he shaves himself, he doesn't shave himself. This contradiction, which now seems like clever wordplay, devastated the mathematical community in 1901. Afterwards, Russell and Whitehead coauthor Principia Mathematica, in which they take 362 pages to prove that 1 + 1 = 2. The text is so dense that they can't find a publisher. However, since they spent so much of their lives writing the book, they decide to self publish.

The authors imaginatively deal with Russell's attempt to balance interpersonal relationships and the drive for truth, while also avoiding going mad as so many of his heroes did. Logicomix proves to be a humorous and evocative hybrid of the modern graphic novel, philosophy, and the mind of a genius.