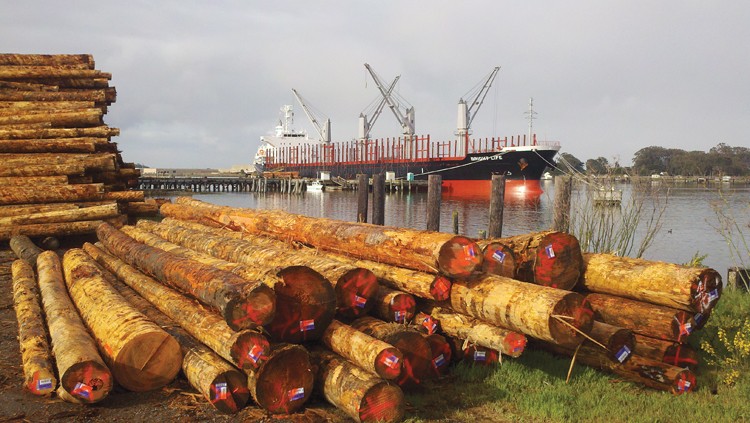 You may have noticed a lot more logging trucks on the roads this year -- trucks loaded with Douglas fir, white fir, spruce and hemlock logs. But chances are those logs weren't headed to one of the handful of remaining Humboldt County sawmills. More likely they were loaded onto ships, either here in Humboldt Bay or at some other West Coast port, then sent across the Pacific to China, where rapid industrialization has opened up a huge demand for softwood.

This bullish export market is welcome news for timberland owners throughout the Pacific Northwest. The housing collapse has been brutal to the entire industry, with tight credit markets and the steady stream of foreclosures keeping housing starts at anemic levels.

But not everyone was thrilled with the idea of sending whole logs overseas. Veteran lumberman George Schmidbauer, for example, was forced to eliminate a shift at his sawmill in March, placing 60 mill workers on unemployment, due to lack of supply. Meanwhile, hundreds of thousands of un-milled logs were being stockpiled across the street at the Schneider dockyard, awaiting a western-bound shipping vessel.

While everyone seemed to agree that it's less-than-ideal to export whole logs rather than value-added products like processed lumber or manufactured goods, those complaints carried little weight next to the laws of supply and demand. And while mill workers went on unemployment, bar pilots, truck drivers, longshoremen and stevedores were thankful to see any work at all. Plus, the Harbor District, which had seen shipping traffic evaporate after the closure of the Evergreen Pulp Mill, had some justification for the federally funded dredging of our bay.

Humboldt Bay remains an expensive shipping port due to its meager infrastructure and the difficulty of navigation. It remains to be seen whether foreign exports will lead to more opportunities and a new period of economic growth around Humboldt Bay, or whether we're merely shipping out scaffolding for the world's next superpower.