The Irishman and Marriage Story 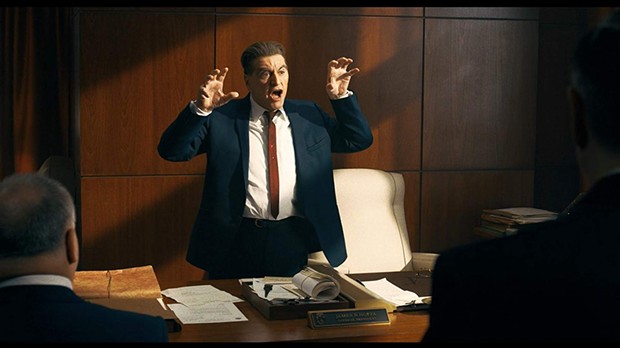 THE IRISHMAN. This is not exactly a new release. But as art and entertainment now live deathlessly — like identity, real or manufactured, and all of our malfeasance and misadventure — in the digital ether, I'm not too worried about it. Nor do I find it bothersome that the movie's Netflix release might somehow contravene Martin Scorsese's public attitude about cinema and the theatrical experience. The conventional American movie business model is outmoded, low-speed and high-drag, and the few remaining studios are dinosaurs, eyeing the volcano as it darkens the sky, portending their extinction.

Scorsese would prefer we see his movies in a theater. Fine. From my immersive observation, though, the positives of the theatrical experience (giant screen, great sound, dark room) can now be more closely replicated at home than elsewhere, plus we don't have to worry about the whole affair being ruined by the discourtesy, obliviousness and constantly glowing phones of other people. My reverence for the Cinema as Temple, while permanent and indelible, diminishes daily.

And so we arrive at our precipitous moment: Hollywood didn't want to pony up $100 million to $150 million for Scorsese to get the band back together and make a three-and-a-half-hour gangster epic about looking back on a life of hard choices. Given his druthers, he'd rather not have us watch said epic on a television. Sometimes when nobody wins, everybody wins. Netflix was willing to take the big gamble and it allowed Scorsese to make the grandest, most narratively ambitious, perhaps most contemplative movie of his formidable career. And I didn't have to leave the house.

Framed by a near-present-day monologue into camera, The Irishman essentially tells the biography of Frank Sheeran (DeNiro), the late real-life "union activist" and jack of all violent trades who, on his deathbed, took credit for a number of notable and notably unsolved assassinations in the mid-20th century. Chronologically, the narrative begins with Sheeran, recently home from the lengthy, blood-soaked Italian campaign in World War II, simultaneously meeting Russell Bufalino (Joe Pesci) and learning the art of the hustle. Sheeran, driving for a meat packing company, figures out how to lose a few sides of beef without anybody being the wiser. Well, until he starts to lose entire truckloads and management wises up. They press charges but his union sweeps to his defense, represented in court by Bill Bufalino (Ray Romano), fortuitously a cousin of Russell, who becomes aware of Sheeran's stoicism and capability. Russell, in his own quiet way, presides as boatman on a river of cash, controlling a network of businesses, legitimate and otherwise, and serving as a vital influencer and mediator; his lips to gods' ears. He enlists Sheeran as a trusted operator, assigning him ever more delicate and dangerous work, which, in turn, brings him to the attention of Teamsters' boss Jimmy Hoffa (Al Pacino), whose papal reign is inextricably tied to Russell and his, er, associates. And so a series of world-altering events spanning decades is set into motion with Sheeran quietly at the center of the maelstrom.

The Irishman, adapted by Stephen Zaillian from Charles Brandt's book I Heard You Paint Houses, moves effortlessly back and forth in time across the mid-century, punctuated by the intersection of organized crime and the CIA, the Kennedy assassination and the Watergate break-in, among many other events. Given the scope of the story and its considerable running time, it could easily be a ponderous, taxing affair. But the genius of Zaillian's script, Scorsese's forever-young grasp of story and style, longtime collaborator Thelma Schoonmaker's perfect editing and Rodrigo Prieto's gorgeous cinematography all serve to make the movie feel lithe and substantial at once. It moves with such grace and energy that one almost can't tell what sort of speed it is generating, but it is simultaneously suffused with a contemplative sadness and a consideration of life lived that few artists could aspire to, much less achieve. R. 209M. NETFLIX.

MARRIAGE STORY. My "relationship" with Noah Baumbach begins with his co-writer credit on The Life Aquatic with Steve Zissou (2004), which remains my favorite of Wes Anderson's movies. The next year, Baumbach wrote and directed The Squid and the Whale, a brutally honest, semi-autobiographical family drama told from the perspective of pre-adolescent and teenaged brothers that cast me into a months-long depression. We have some history.

While I haven't enjoyed everything he's done with equal fervor — I thought the gushing reaction to Frances Ha (2012) was a bit much, for one example — I continue to admire Baumbach's ability to look unflinchingly and unflatteringly at himself and his milieu, and to summon simple, frequently heartbreaking, often funny stories of great nuance and timeless themes. He writes characters down to the corpuscles, so intensely well-observed that the narratives through which they move can feel almost incidental: Of course this is happening because these are real people, weirdoes and damaged goods though they may be. This may be truest of his most recent work, Marriage Story, which sends Charlie (Adam Driver) and Nicole (Scarlett Johansson), a theater director and actress, through bi-coastal meat grinder of separation and love lost. Touching, tragic and deceptively funny in equal measure, Marriage Story is a striking glimpse at the truth in a cracked mirror, a theatrical production of real life played out with very convincing masks. R. 136M. NETFLIX.

HONEY BOY. A drama about a young actor (Lucas Hedges) in freefall looking back on his childhood and relationship with his father (Shia LaBoeuf). R. 94M. MINOR.

REDOUBT. Matthew Barney experiments with movement as language on a hunt in the mountains of Idaho. NR. 134M. MINIPLEX.

NATIONAL LAMPOON'S CHRISTMAS VACATION (1989). "I don't know what to say, except it's Christmas and we're all in misery." PG. 97M. BROADWAY.

FANTASTIC FUNGI. Mycological documentary with time-lapse footage of mushrooms and a dive into their history. NR. 81M. MINIPLEX, MINOR.

FORD VS. FERRARI. Matt Damon and Christian Bale star in an excellent true-story drama about an engineer and a driver perfecting a racecar in a years-long grudge match. With engaging performances and exhilarating racing sequences. PG13. 152M. BROADWAY, FORTUNA, MILL CREEK.

FROZEN 2. Elsa and Anna return for more snowbound sisterly adventure and to put that song back in your head. PG. 104M. BROADWAY, FORTUNA, MILL CREEK, MINOR.

IT'S A BEAUTIFUL DAY IN THE NEIGHBORHOOD. Tom Hanks dons the cardigan of Mr. Rogers in this biopic that's probably wholesome enough to give you strong bones and healthy teeth. PG. 108. BROADWAY, FORTUNA, MILL CREEK.

LINDA RONSTADT: THE SOUND OF MY VOICE. Documentary about the iconic singer. With Bonnie Raitt and Dolly Parton, so go and be blessed. PG13. 95M. MINIPLEX.

MALEFICENT: MISTRESS OF EVIL. Angelina Jolie is back in the horns to block Aurora's (Elle Fanning) wedding and throw down with Michelle Pfeiffer. With a winged Chiwetel Ejiofor. PG. 119M. BROADWAY.

QUEEN AND SLIM. When Slim (Daniel Kaluuya) shoots a cop in self-defense, what started out as a first date with Queen (Jodie Turner-Smith) turns into an escape from the authorities. R. 132M. BROADWAY.