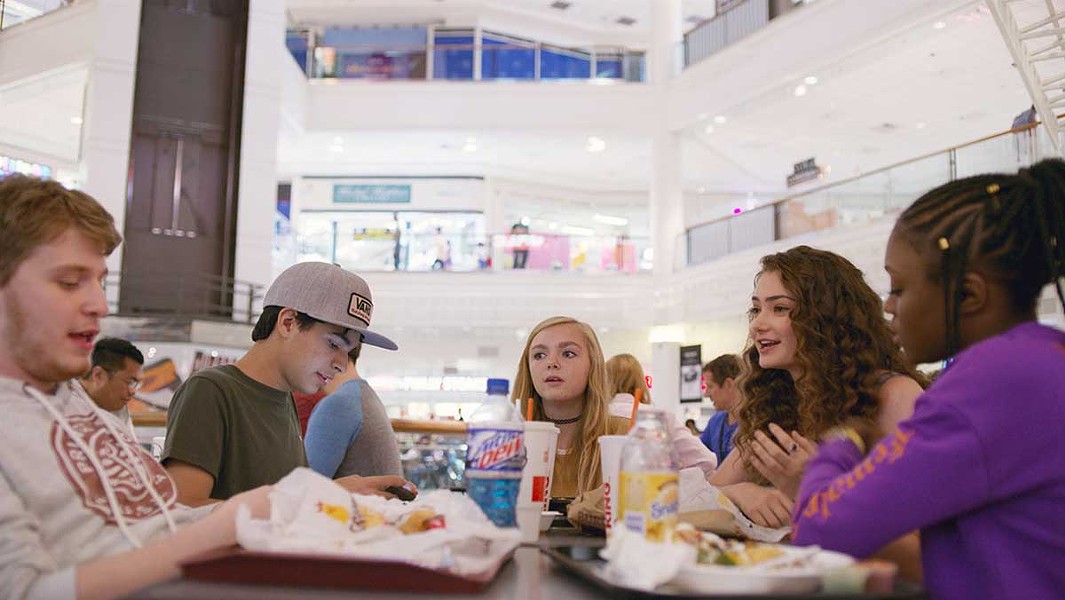 Eighth Grade A table of people with a better handle on earth science than our president.

THREE IDENTICAL STRANGERS. There are stories, obscured by the complacency and subterfuge of modern life, that retain the power to surprise and amaze. Some, through exploration, become chilling reminders of what we do not and cannot know about the world and, more importantly, the people around us. Three Identical Strangers has become one of the more talked about movies of the year because it takes on one of those very stories. The story's the thing and director Tim Wardle's movie illuminates it just enough to make us curious about its darker, just-distant reaches without ever exploring them.

Strangers opens with a dramatization (somewhat painfully in the style of Errol Morris) of past events, wherein a young man from Long Island goes away to college in 1980, only to encounter a campus full of people who seem to already know him. He, Robert Shafran, as it turns out, is the identical twin of Eddy Galland, who attended the same college. They were separated and adopted when they were 6 months old, their adoptive families kept ignorant of each others' existence. The story became medium-big regional news, at which point they became aware of their third identical brother, David Kellmann. And then it became big news.

The story is too contingent on the "reveal" to get further into plot points here, but safe to say this: For as much as Strangers gives us, it introduces so many questions and eludes to such sinister motives — all of which are left fundamentally unaddressed — that it's more frustrating than anything else. PG13. 147M. MINIPLEX.

EIGHTH GRADE. Kayla Day (Elsie Fisher) isn't stick-skinny. Her skin isn't perfectly clear. She isn't effortlessly charismatic. She doesn't have many friends. She knows these things about herself. It's the last week of eighth grade and the world is a goddamn minefield. And, in writer-director Bo Burnham's (he's known to many as the teenager whose piano-comedy YouTube videos made him a stand-up star) debut feature, that week of navigating dangers is distilled into 93 minutes of wringing despair and breathless exhilaration. Adolescence is rendered art with compassion and authenticity that is, at least in contemporary cinema, unparalleled.

There is, of course, a long and likely boring conversation to be had about the lives of young people as rendered in the movies, going back to Satyajit Ray's Apu Trilogy and the French New Wave (particularly Francois Truffaut's contributions), through to Harmony Korine and Larry Clark's over-esteemed but still-important Kids (1995). Eighth Grade is and should be a part of that continuum.

More to our purpose here, Burnham's movie (which belongs just as much to Fisher, fearless and perfect in the part) is consummately watchable. Equal parts diary of a week and an astute examination of growing up in the age of social media, it remains compelling throughout. It's shot and lit with obvious care, bursting with color, conveying the delicious, impending sunburn feel of summer stretching out before us with the camera. It captures the brilliance and terror, the impossible immediacy and immensity that define the emotions of a certain age. It gets real and raw, but is also defined by compassion, so it never feels manipulative or jokey. It doesn't fumble in attempts to shock (see: Kids). As perhaps in life, Eighth Grade will break your heart but you'll smile while it's happening. R. 93M. BROADWAY, MINOR.

THE SPY WHO DUMPED ME. Maybe this is presumptive or preemptive, but I find even the title problematic. (For what it's worth, I was really looking forward to this one). I get the pun and that's all well and good. But for a movie starring women (Mila Kunis and Kate McKinnon), co-written and directed by a woman (Susanna Fogel), a title that objectifies the lead before we've even met her seems to be working at cross purposes. But maybe that's reading too subtextually.

Audrey's (Kunis) semi-mysterious boyfriend Drew (Justin Theroux) has just broken up with her. By text. Her oddball best friend Morgan (McKinnon) tries to cheer her up with a birthday party. It's the thought that counts but the whole thing's a bust. And so they head home to burn Drew's stuff. Shortly thereafter, Audrey and Morgan become embroiled in international intrigue set in motion by the absent Drew, who, of course, is some sort of secret agent. (The background plot, the stuff of who works for which corrupt agency and why they're all at odds, is frustratingly under-developed). They jet off to Prague, where the plot serves mainly to lob up premises for not-well-enough-executed action set-pieces and not-funny-enough comic two-handers.

Kunis is a more formidable actor than she gets credit for and McKinnon is, of course, one of the great modern genius weirdos. But neither of them really ever hits her stride in this one, reaching as it does for kinetic, ultra-modern movie violence and gendered high-comedy without hitting the marks for either. R. 116M. BROADWAY, FORTUNA, MILL CREEK.

BLACKKKLANSMAN. Spike Lee directs the true story of an African American cop (John David Washington) who, with the help of a white cop (Adam Driver), catfishes the KKK to take the hate group down. R. 135M. MINOR.

THE MEG. Assuming Jason Statham is going to whip off his shirt and either fight or race the whale-sized shark. PG13. 113M. BROADWAY, FORTUNA, MILL CREEK.

HOTEL TRANSLYVANIA 3: SUMMER VACATION. Dracula and his posse try to unwind with a cruise. What's the worst that could happen? PG. 97m. BROADWAY.

THE INCREDIBLES 2. This fun, clever and funny sequel is worth the wait, with the returning cast and the right villains for our times. Craig T. Nelson and Holly Hunter. PG. 118m. BROADWAY.