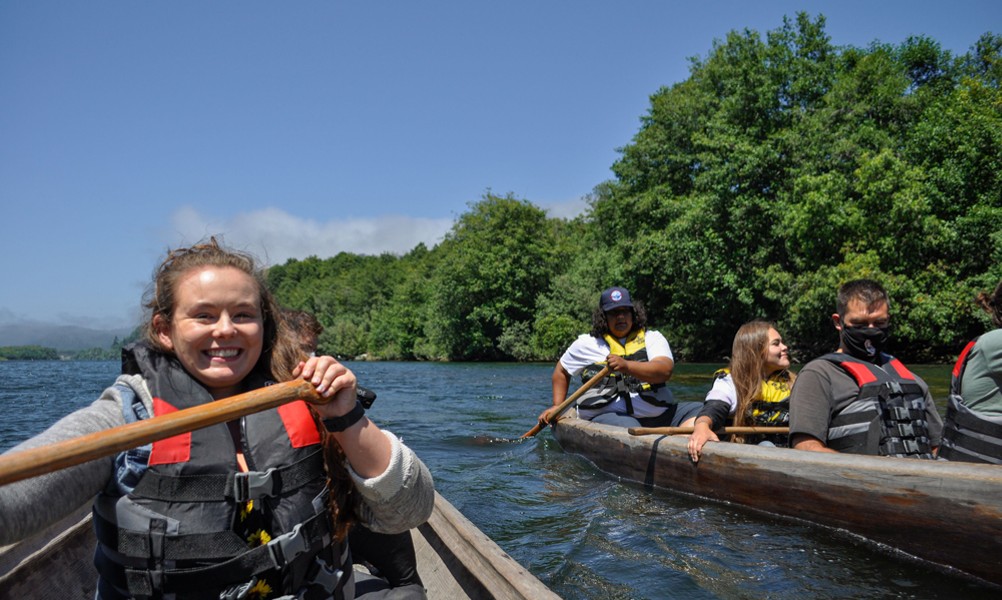 Submitted Arcata High School Senior LeMonie Hutt, a Hoopa Valley Tribal member, has been instrumental in getting the Northern Humboldt Unified School District to adopt the curriculum and incorporate Native perspectives and knowledge in a number of its schools' courses. 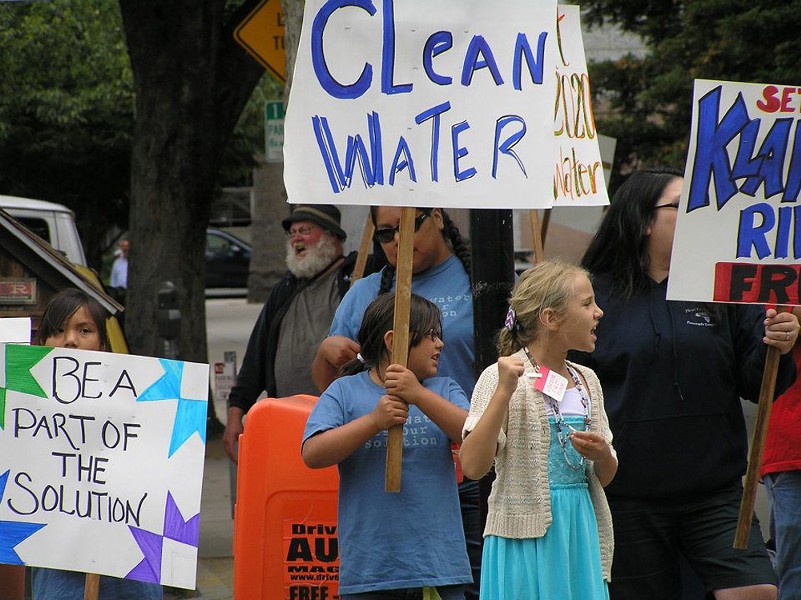 Photo by Regina Chichizola LeMonie Hutt (right) began advocacy work as a water protector when she was 8 years old and is now preparing to attend Harvard University in the fall. 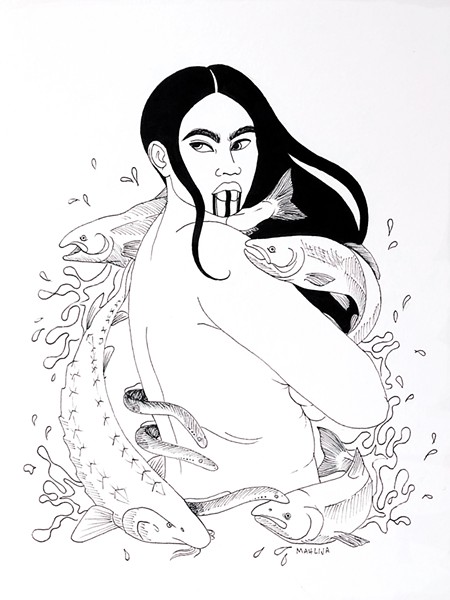 In an effort to reshape the way schools teach about Indigenous issues, two local student activists are pushing to get a new Native American-focused curriculum in schools throughout the region.

In 2020, local Indigenous leaders and educators from Cal Poly Humboldt and local nonprofit Save California Salmon released a curriculum called the Advocacy and Water Protection in Native California High School Curriculum. The 93-page curriculum, which comes complete with lesson plans and a companion teachers guide to additional resources, is aligned to state Common Core Standards and provides teachers a framework for adding Indigenous history and knowledge to existing courses and lessons.

Arcata High School seniors Isaiah Levy and LeMonie Hutt have led the charge on campus to get the curriculum into their classrooms, working from different perspectives. Hutt, a Hoopa Valley Tribal member and president of the Arcata High Native American Club, learned about the it while interning for Save California Salmon, a driving force behind its creation. Levy, meanwhile, was working as a local director of organizing for the statewide student-led social justice group GENup. Both students said they were disturbed by the lack of culturally informed lessons surrounding Indigenous peoples and wanted to help make a change.

"The curriculum that is used today to talk about Indigenous people is often said in the past tense, like we're not existent," Hutt said. "[It] is used to assimilate Native people to this narrative that colonization and westward expansion is, like, this superior thing."

Hutt pointed to the creation of the U.S. boarding school system in the 19th century that sought to eradicate Indigenous culture by forcing youth to relinquish their traditions, languages and even families.

"The curriculum we're trying to introduce into the school system is us as Native people reclaiming our educational experience," Hutt said.

Even as a non-native student, Levy said he often feels his education isn't tailored enough to Humboldt, Del Norte and Trinity counties, which are home to 11 tribes, rancherias and sovereign tribal governments, with Arcata High School sitting in the heart of the Wiyot ancestral territory.

"I think having an educational opportunity like this curriculum that is truly special to Humboldt County and Arcata High will excite kids and make them feel like they're learning about the place that they've grown up and the world around them rather than just about the same world that's taught to every kid that grows up in California for the last 20 years," Levy said.

The students said they are particularly excited about the element of the curriculum that will bring guest speakers with have years of Indigenous expertise to share into local classrooms.

"I've been talking to the members of the Native American club about introducing a curriculum like this and they're so excited because they've grown up on tribal ecological knowledge and tribal history and tribal government," Hutt said. "But, you know, they weren't seeing it represented in their classroom, they weren't seeing themselves represented in their classroom and kind of just like, watching kind of, like their history being erased ... I feel like it's going to be really inspiring to Indigenous students, too."

Advocacy and Water Protection curriculum touches on traditional ecological knowledge, Native history and water law. According to Save California Salmon Co-director Regina Chichizola, it is designed to be integrated into other classes and subjects rather than to create a standalone class. For example, lessons about the Fish Wars — a series of protests in the 1960s and 1970s by tribes across the Pacific Northwest over government restrictions of their fishing rights — can easily be included in history classes during discussions of the Civil Rights Movement, while lessons on Indigenous relationships to rivers and diminishing salmon populations can be included in existing science classes. This approach makes it easier for districts, schools and teachers to incorporate the curriculum into existing courses rather than having to create a new program, while also ensuring Indigenous perspectives are included in various classrooms.

"We want all different subjects and lessons for Native people to be taught in a better way," Chichizola said. "We don't want to just learn about, 'There's a dam built over here' — What watershed? Whose people's land is that? Is there a way to manage that watershed better? How does traditional ecological knowledge and science fit into the science that we're learning in schools already?"

Cutcha Risling Baldy, an associate professor who chairs Cal Poly Humboldt's Native American Studies Department, said the next generation of youth face mounting issues surrounding climate change and resource scarcity. Teaching about indigenous management practices and learning to respect those practices, she said, will help students understand their responsibility for and connection to the ecosystem.

"Management practices of Indigenous peoples have been proven time and again to really be good at showing what a sustainable practice actually looks like," Baldy said. "An integrated practice that values relationship and responsibility allows us to make sure that the species —human and salmon alike — are thriving in an ecosystem that's healthy for everyone."

The curriculum also contains a section on advocacy and creating informational campaigns so students can learn how to effect change on issues the care about, like whether it be river health, fishing rights or food security.

Hutt said she also sees the curriculum as a way to prepare non-Native students for jobs in which they may work closely with Native communities.

Together, Hutt and Levy drafted and circulated a letter of support for the curriculum and presented it to teachers who signed as a pledge to implement it in their classrooms.

While portions of it have been taught at Hoopa Valley High School and schools in Del Norte County, Chichizola said it may take time for the curriculum to become a staple of high school education.

Save California Salmon has been hosting a training on the curriculum at Cal Poly Humboldt for teachers, with Hutt addressing the educators as a part of a youth panel on April 2.

"As educators, we must look at this place that we all call home as a powerful context for our students to grow and learn in," Macdonald said. "This means teaching hard histories about genocide and colonization. It also means learning about Native peoples' resistance, advocacy and traditional ecological knowledge."

Macdonald said the work was "long overdue" and that he was "very impressed" with the students' effort.

Levy hopes to pass the torch of advocating for the curriculum's incorporation into local classrooms to younger students after he graduates in the spring. Meanwhile, Hutt, who has been protesting and speaking at California State Water Board meetings since she was 8 years old, also created a video for her peers about how to effectively engage in public testimony.

Both Hutt and Levy said they plan to continue their advocacy efforts in college — Hutt at Harvard University and Levy at Columbia University — having already left a legacy at and beyond Arcata High School.

"Roger Macdonald's reaction was even more positive than I was honestly even hoping for," Levy said. "I have a younger sibling at the school and I think he'll most likely get some of the curriculum taught to him in his U.S. History class next year, which is really exciting to me."

Carly Wipf (she/her) is a freelance journalist based in Eureka.