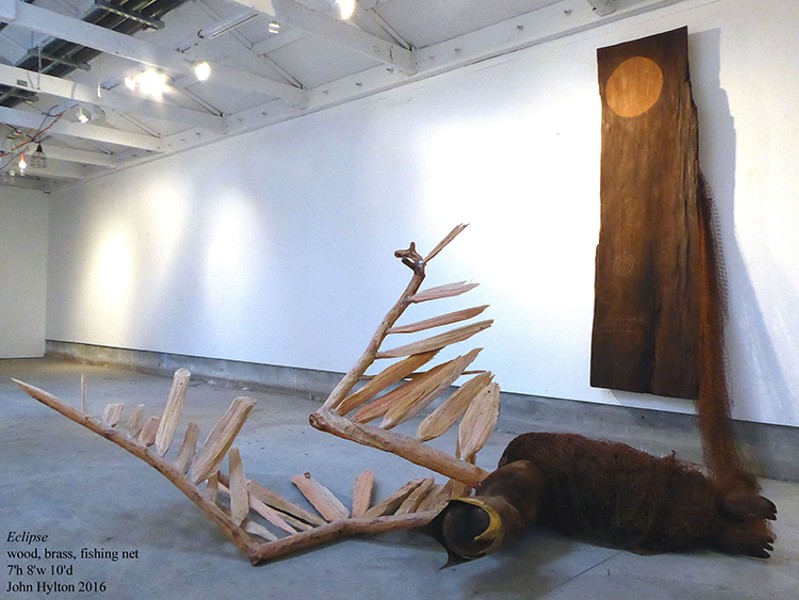 Courtesy of the artist Hylton's installation "Eclipse" draws from Homer.

In John Hylton's art installations, ravens lend a hand. Wooden pythons whiplash across the night sky. Rough-hewn wooden figures get lost in contemplation of a painted cosmos. This is a humanist cosmos, one that's accessed via the gazing eye — no tech necessary beyond the retina.

Scenarios mark intersections where understandings of the natural world based in ancient myth converge with those founded in science. Legends, myths and oral tradition from various cultures around the world indicate such conjunctions, the artist explains, which is why such texts are frequent starting points for his investigations. (Re-readings of the Middle English epic Beowulf and the ancient Greek poet Homer's Odyssey prompted the creation of recent works.)

Several of the multimedia works Hylton is showing during the month of October at Piante Gallery in an exhibition curated by Sue Natzler explore legends that explain the origin of constellations. "Python" (2016) pairs a carved serpent with a painted caption that reads: "HE RAISES HIS TAIL, swept down a third of the stars from heaven and cast them to the earth."

"I'm creating objects to tell a new story about cosmology, the way the ancients of North America, the British Isles and the Oceanic areas tracked the cosmos and told stories of the stars," Hylton says, "blending contemporary concerns with what I see as related structures and ideas from the earliest days of civilization."

Pursuit of that goal led him to adopt a conversational, integrational approach that brought objects into a relation with painted images, and vice versa. "I always use whatever to tell a story," he told me; "sticks and bits of wood. Old pieces of metal." Back when he was studying glass blowing at Ohio State University, he "started combining stuff" with the molten glass from early on.

Hylton recalls that growing up near the ancient indigenous site of Serpent Mound in southern Ohio fostered an early appreciation for markmaking encounters with the earth and sky. His experience with land art of the 1970s and '80s and later encounters with the work of allegorically inclined postmodernists reinforced this inclination. Hylton has placed sculptures marking the solstice in the middle of a landscape and sculpted Charon as a wren. Points of conjunction where verifiable data matches up with ancient oral tradition often serve him as points of departure.

In "Eclipse" (2017), a contorted body tangled in fishing net rests on the floor, sporting an off-kilter brass crown and an ungainly pair of driftwood wings that appear to bend backward at the wrists, as if broken; the sun's pale disc has burned its likeness into a vertically oriented slab of blackened wood affixed above. Hylton points out that eclipses were understood as metaphor in premodern cultures around the world and that one widespread interpretation involves the belief that the eclipse portends the death of a king or ruler. "I just finished reading Homer's Odyssey," he explains, "and I was struck by the fact that a vivid descriptive passage referencing the sun being obscured 'by an evil mist' could be linked to a historically documented eclipse," one that the ancient poet might conceivably have experienced.

Earlier this year, Hylton completed a permanent installation at the University of California at Santa Cruz Arboretum titled "Sunwatchers," which reconfigured blocks of limestone left over from a disused quarry into a sundial format through the addition of a 14-foot central post and three life-size figures carved from wood. These figures raise rudimentary arms to their breasts in gestures of wonder, entreaty or contrition. Their blocky forms possess a massive gravitas. The faces that look out of the gray, weatherbeaten wood, with their simple, stricken affect, recall early 20th century expressionist renderings filtered through the postmodern sensibility of neo-expressionist sculptors like Magdalena Abakanowicz, Anselm Kiefer, Martin Puryear and Kiki Smith. Like the other figures who appear in his installations, they appear entirely absorbed in their contemplation of the heavens.

They also evoke ancient reference points, like the votive statuettes made in ancient Mesopotamia around the year 2500 BC. These small columnar figures in carved stone share a worshipful pose defined by clasped hands, huge, wide-open eyes and a fixed skyward gaze. They are believed to have functioned as worship surrogates that could embody the prayerful presence of the person who placed them within a temple precinct, even in that person's absence.

Like those votive figurines, Hylton's life-size figures exert a surrogate effect. We stare at them, while they stare at the cosmos in the painted skies before them, and it feels like they are looking at the stars for us, witnessing the stars' evolutions in our stead. They are just about the size you imagine your shadow would be, if it took independent form and absorbed itself in contemplation of the stars.

Editor's note: This article has been updated to reflect the correct dates of John Hylton's show at Piante Gallery, Oct. 1-31, not during the month of September as previously posted. In September, Piante will show the work of Joseph Wilhelm. You can read more about his work on the gallery's website. The Journal regrets the error.