Looking for a Sine

north coast journal graphic Nature’s shape! The height of the line ‘H’ follows a sine curve as the radius line ‘R’ rotates through a full circle. 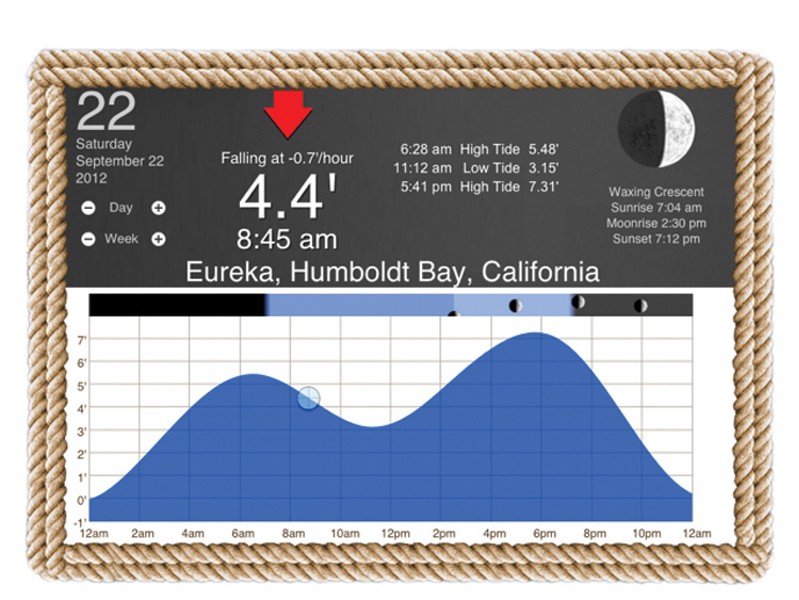 Even though we probably grew up in different countries and eras, I bet you and I were introduced to trigonometry the same way: triangles in circles. Draw a triangle inside a circle so that the hypotenuse of the triangle is a radius of the circle, and you can create formulas for the sine, cosine, tangent and all the rest. Unfortunately, this analytic -- read static -- approach misses the key element of trig, that it's dynamic.

Take the sine. In the context of a triangle in a circle, as the radius line rotates through a full 360 degrees, the value of the sine increases and decreases smoothly between plus-one and minus-one and back again (see graphic).

Well yeah, but that's for scratchy blackboards in dusty classrooms. What the ubiquitous sine really represents is: waves on water; tree branches in wind; inflow and outflow of breath; child on a swing; stadium waves; to-and fro rocking of an earthquake; phases of the moon through the lunar month; cyclist standing on pedals pumping up a hill; height of the noonday sun throughout the year; rising and falling of tides. Not to mention sound waves, AC electricity, light and radio waves -- the list is endless. The commonality here is oscillation, as some variable swings smoothly from one extreme to the other and back again: The faster it moves, the more the braking force.

Here's a banking analogy, adapted from Kalid Azid's brilliant mathematical website "Better Explained" (betterexplained.com). Every week, your weird boss gives you a negative raise based on your bank balance. So if you have $50 in the bank, your raise next week is -$50. Later, when your balance is say -$80, you get a +$80 raise. So as soon as you start making money, your balance is "pulled back" to the mid-point (zero); and as you start losing money, it's pulled back up. The more you've got, the faster you lose it, and the less you've got, the faster you gain it. That constant pull towards the mid-point is what keeps the cycle going, represented by the most natural of curves, the sine wave. (By the way, if the shape of a sine wave reminds you of breasts, you're thinking like an ancient Roman, since etymologically "sine" is cognate with the Latin for "bosom." This in turn derived from Sanskrit jiva/jya, originally the term for a bow, as in bow and arrow.)

The idea for this column came while I was standing on the boardwalk staring at the water. The rhythm of my breath seemed to perfectly match the slow cadence of waves in the bay as I pictured my smoothly-changing inhalation and exhalation, slowing to nothing at maximum in- and maximum out-breaths. The sine wave: nature's repeating refrain that tells us we're not separate from the universe.

Barry Evans (barryevans9@yahoo.com) believes that a life without sines is not worth living.

CAPTION: Nature's shape! The height of the line ‘H' follows a sine curve as the radius line ‘R' rotates through a full circle.