Greg Brown's back in town, Cali country from Bartenders Bible 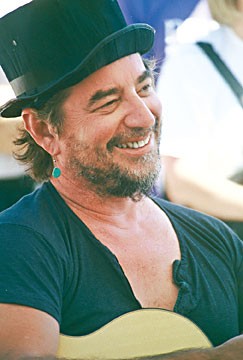 It's not hard to imagine Iowan folksinger Greg Brown climbing out of a dusty, battered pick-up truck parked down some lonesome road, pulling an equally battered guitar and canvas bag full of fishing tackle from the back and ambling down an overgrown path looking for a hole where they're biting.

That's the picture he paints in a talking blues number called "Eugene" on his latest album, The Evening Call. As longtime sideman Bo Ramsey picks out a guitar pattern reminiscent of a burbling mountain stream, Brown, in his gravelly ramble, works his way through a check list for a fishing trip: bamboo rod, hip boots and a book of flies, "take along my Gibson J-45 made by women during World War II, coffee-stained stack of maps, a little propane stove, a pile of old quilts, can opener, kipper snacks, smoked oysters, gunpowder tea, copper tea pot and a good sharp knife. Sometimes you have to go look for your life."

After a brief harmonica interlude he continues with the plan: "You know I'll park by some rivers, cook up some rice and beans, read Ferlinghetti out loud, talk to the moon, tell her all my love tales — she's heard them, many times; I'll make up some new juicier parts — drink cold whiskey from a tin cup, sit in a lawn chair, fiddling with my memories, close my eyes and see. Sometimes you gotta go not look for nothing."

Before he's done he's touched on "the blandification of our whole situation" and world peace while making his way east through Nevada and Utah heading for the Ozarks in search of brook trout and "the sounds old Mother Earth still makes all on her own." You just know he'll find that nothing and it will be something. It's a Zen thing.

Greg Brown and Bo Ramsey are back in town this weekend to play a few songs and tell a few stories on Saturday evening on the stage of the Van Duzer Theater. Expect an opening set from Bo. Sunday morning they hit Hwy. 299, driving on over to Chico. Maybe they'll stop along the way and see if they're biting, maybe not.

"We recorded the album at this place out by Joshua Tree called Pioneertown," said Strachota, calling from the band's home base in San Diego. "It was built by Roy Rogers and Gene Autry in the '40s. It has these Old West storefronts where they shot films. Behind the storefronts were bowling alleys and bars. It's still there, but the only thing operational is a restaurant/bar called Pappy and Harriet's Palace. Our bass player Jim bought a place a mile or so away; technically the area is called Rim Rock. It's high desert. We wanted to record out there so we basically just took a studio to Rim Rock and set up in his house. We took Paul Jenkins from Blackheart Procession out there to engineer it. Of course we had to take a little trip out to the Gram Parsons memorial, the place where they burned his body."

The Rim Rocksongs speak of broken hearts, lonely truck drivers, hot dry desert days with vultures circling. And yes, you can sense Gram's ashes blowing in the wind. This weekend Bartenders Bible takes to the road heading north. Catch them when they stop for a show at the Pearl Saturday on their way to Washington.

Elsewhere Saturday you have an unusually eclectic collection of concerts spread around the county: The worldly Gamelan Xis at Fulkerson Hall (more on that show in the calendar), Irish singer/harpistAnnette Griffin and the McBride Irish Dancers play for a pre-St. Pat's "Best of Ireland" show at the Arkley Center and The Scotia Ragtime Bandplays music from the ragtime and World War I eras at the Fortuna Monday Club.

The seemingly tireless Pete Ciotti called to say, "Me and Lenny [Pettinelli, aka Nipsy] are releasing our Day Go CD Mangiathisweekend. The band name is a play on words being we're both Italian — it's I-talian music done sort of funk style with the wacky Nipsy twist." The Day Go CD release party is Friday at Humboldt Brews with Murdockulous opening.

For your weekly dose of underground hip hop check the Traveling Circuits Tour out of NYC, coming to Humboldt Brews Thursday withThe Metermaids, Bisc One and Domer.

Saturday the hip hop action moves to the Red Fox for a display of "revolutionary lyricism" by A.P.O.S.T.L.E.from Heavyweight Dub Champions with DJ Quest, Resident Anti-Hero and Humboldt's own J La Sarge.

Experience something a little different Sunday, March 9, at the Westhaven Center for the Arts: Zoe and Kim Boekbinder, aka the ecogroovy sister cabaret act Vermillion Lies, are up from Oakland to play "amazing music on random instruments" from their brand spanking new CD, What's in the Box?

Deep Groove Society presents a special edition of Sundaze on Sunday at the Jambalaya with "phonomental" SoCal Dj/producer Simply Jeff.

How about back-to-back stringband shows at Humboldt Brews? Huckleberry Flint plays one of its infrequent local gigs Sunday, followed by a Monday show by The Hackensaw Boys from Charlottesville, Virginia, a little town in the foothills of the Blue Ridge Mountains. The H-Boys have been rambling around playing wild jammy post-bluegrass for about nine years; don't miss 'em if that's your thing.

Tuesday at the Red Fox it's guitar wiz Steve Kimock and Friends, with the current friends being a particularly stellar bunch. There's Melvin Seals from JGB on B-3 organ, bassist Hutch Hutchinson from Bonnie Raitt's band, Steve's son John Morgan Kimock on drums, plus Billy Goodman from The Goodman Brothers handling vocals. Kimock watchers will remember that Billy and his bro were the ones who brought Steve West 30 some odd years ago.

HSU's NORML chapter celebrates "Legalize It" Day at the Van Duzer Wednesday, March 12, with speakers in the afternoon starting at 4:20 including Jack "The Emperor Wears No Clothes" Herer and Rev. Eddy Lepp. Later on (9-ish) there's music by AfroMassive and Subliminal Sabotage.

And in other Reggae-related business, the Mateel Community Center, in association with Friends of Reggae on the River, presents The SoHum Soul Revival on Saturday, March 8, at the Mateel. Despite the name, it's not a soul music concert, it's a reggae show in honor of International Women's Day featuring Judy Mowatt,a singer who made her name initially as one of the I-Threes, the backup vocal group for Bob Marley and the Wailers. Judy is bringing her keyboard player and own harmony vocalists, including her daughter Shema (by ex-husband Freddie McGregor), otherwise she'll be backed by The Demolition Squad, a reconfiguration of Hoy Kersh's band Massawa with Hoy's son Shasta Kersh on bass, Brody Forester on guitar and a few Jamaican musicians. The D-Squad will also back co-headliner Winston Jarrett, a Jamaican veteran who was part of Alton Ellis' band The Flames back in the day. Come early for an Ital dinner prepared by Sue Moloney.

You may have heard that the organizers were a bit worried when, right after the event was announced, PG&E announced that the Redway area's power would be shut off for transformer repair work for 12 hours that just happened to fall in the middle of showtime. According to the Mateel staffer Justin Crellin, that problem has been solved. The planned outage has been rescheduled. Crellin also noted that the Friends of the Reggae on the River listed on the posters is a support group for Mateel operations. He emphasized that the show is not raising funds to support the Mateel's lawsuit against Tom Dimmick and People Productions.

For those who have not been paying attention, the Reggae suit hearings are on hiatus, at least until St. Patrick's Day. In the meantime there's the annual Reggae-related public hearing before the Humboldt County Planning Commission coming up Thursday, March 6, which includes a review of the annual report for what is officially described as "the 2007 Reggae on the River/Reggae Rising Music Festival."

As detailed in the public notice, "The Planning Comm. will be setting the attendance levels for the 2008 event; the applicant is requesting ticket sales be allowed to increase back to the 2006 levels of 12,000, and with the commensurate increase in staff and volunteers, the total number of persons at the event would be 14,400 persons."

Judging from what happened at similar commission meetings last year, I'm guessing we might see the ongoing resistance from the Mateel side go public once again. While the Reggae War is on break in the courts, it rages on in SoHum, particularly in the blogosphere, and there's no end in sight. One love? Forget it.