For a few hours, I was a chauffeuse for a touring group of redwood-loving nobility 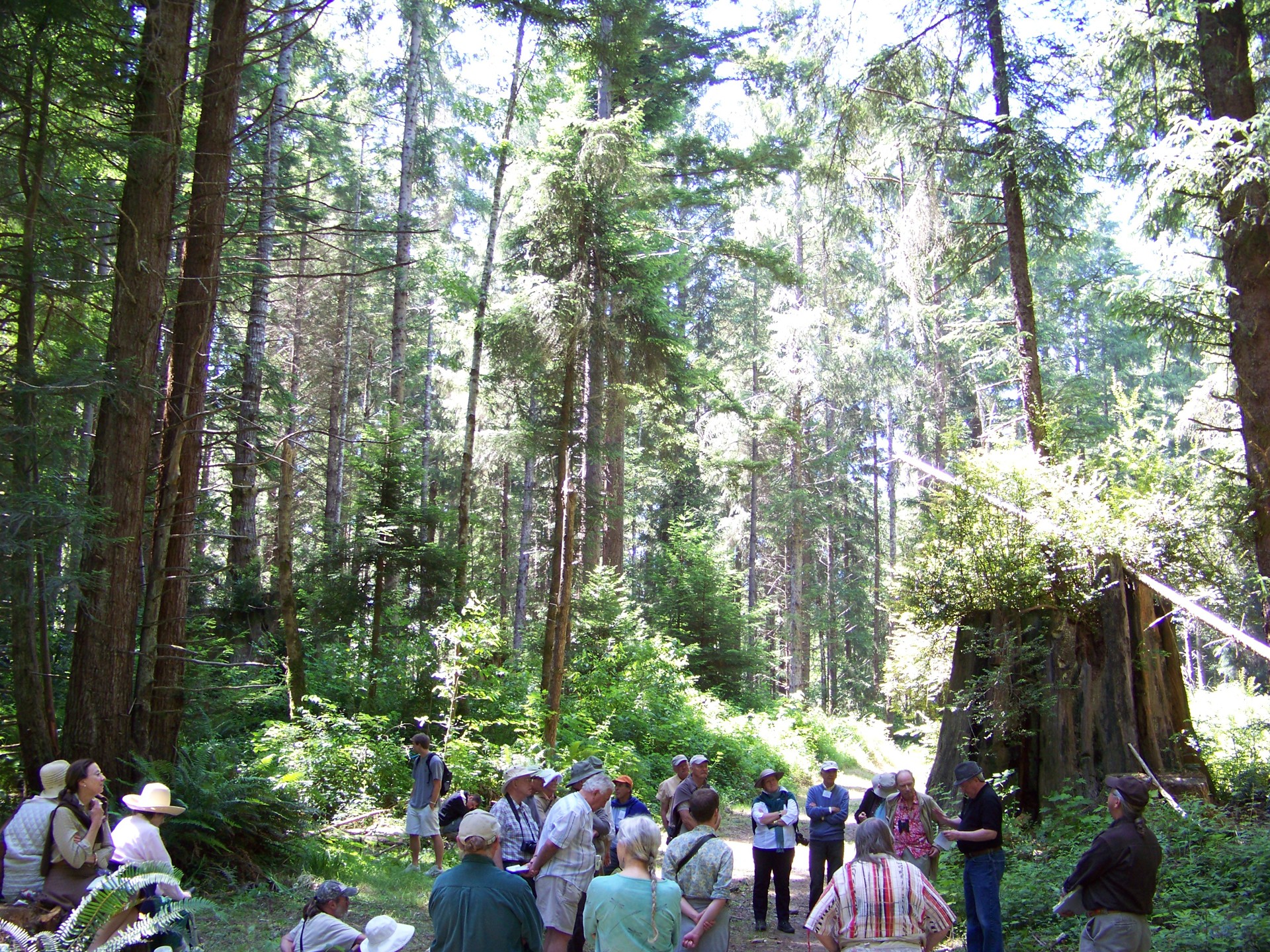 "Sorry we're so late," John Palmer, a retired forestry professor from North Carolina, and the IDS member who coordinated the tour, said to me; he'd invited me along to report on the event. "We were enjoying Trinidad too much! With the view of the Pacific, all around us!"

They'd no doubt lingered as well over the smoked-salmon picnic prepared by Marie Antoine, the wife of Dr. Steve Sillett of Humboldt State University. You know the Silletts: world-renowned tree-climbing/researching pair from Arcata. Humboldt's own redwood royalty, you might say. The Silletts had joined the tourists on Sunday, not long after they had stopped to admire the drive-through Chandelier tree in Leggett, to explain redwood forest ecology as they traveled the Avenue of the Giants and walked through Founders Grove. (And, later in the tour, they'd be enjoying more Marie-cooked meals.)

The bus followed Wilkinson's shiny black VW Beetle and my filthy white pickup to the entrance of the Van Eck. The bus parked, and most of the IDS members walked up the dirt logging road leading into the Van Eck. A few piled into the vehicles: Lady Virginia, whose sciatica was acting up, got into my passenger seat, and several others, including The Vicomte Philippe de Spoelberch, of Belgium (also with sciatica; but, more notably, a beer magnate and a major horticulture sponsor), climbed into the back to sit, unfortunately, in the stickers and dirt.

We regrouped a short ways up the road amid several gigantic, huckleberry- and fern-overgrown redwood stumps and stands of tall Sitka spruce, red alder and tan oak. A young redwood in a pot stood beside a freshly dug hole. The IDS members were here to plant the tree in honor of Fred Marinus Van Eck, a New York investment banker who had owned these woods and who had been a lovable, if occasionally trying, member of IDS. Van Eck died in 2000, just days before the IDS had been planning to visit the redwood coast, and they had canceled that tour. Now they were here, at last.

Wilkinson told the group how his company manages the Van Eck for the Pacific Forest Trust, which in turn manages it for the Fred M. Van Eck Forest Foundation -- Van Eck willed his timberlands to the foundation, which donates the profits from the forest operations to Purdue University, per Van Eck's wishes. The 2,200-acre Van Eck property consists of four tracts of forest, three here near Fieldbrook and one closer to Trinidad. This 544 acres was logged in the 1800s and again in the 1950s. Now, per Van Eck's wishes, it is a working forest with a conservation easement, intended to grow timber, sustain wildlife and make some big redwood trees like of old. Its biggest fame is that the PFT has made it a carbon sequestering bank, from which folks like Arnold Schwarzenegger have already bought carbon credits. (See "Mr. Van Eck's Forest," Dec. 6, 2007)

"I was working for a timber company at the time," he said. "And I remember a guy came in the office one day, and the lady up front came back and said, ‘There's a man out there who looks kind of down on his luck.'"

It was Van Eck. He had a hole in his pants. He was staying at the Motel 6. "Fred was just one of the boys," said Able. "He wore a floppy hat." He also was an avid forestry student -- he peppered Able with questions, and learned the woods business inside and out.

The IDS members had seen the big trees down in Northern Mendocino and southern Humboldt. Later, they were going to see more big trees up north. But right here, in this recovering forest, they could imagine the future.

Charles Notcutt, of England, after a celebratory speech, noted the working nature of this forest and then nodded at the potted tree. "My hope is that you do not fell this tree, and that it lives to be 2,000 years old."

After they planted the tree, the members wandered about. Sir Richard Storey, a retired barrister and a newspaperman, told me that, like most of the IDS members, he had a lifetime interest in dendrology.

"I have land in Yorkshire," he said, "and I have a woodland -- 600 acres. I manage it for amenity and silviculture." But he said the IDS is not a club simply for the self-amusement of its members, but that it also provides scholarships for students from around the world to study horticulture and forestry abroad.

Jane Whiteley, also of England, had stopped next to the vicomte from Belgium, resting on a log. "We went on a tour in Turkey, and Mr. Van Eck was there," she said. "And he'd ask questions, and he'd ask questions, and we'd stop the bus and he'd ask more questions. And we'd go, ‘Oh, he's going at it again.' But I was very fond of him. He came to our drinks party one time, during the Chelsea Flower Show -- you don't know about the Chelsea Flower Show?! Anyway, we had a tour to our woodland garden, which is next to Lord Heseltine's garden -- you don't know who Lord Heseltine is? You really should know that; he was almost prime minister. And he is an IDS member."

After the tour, over drinks, Whiteley learned that Van Eck had not been invited to Heseltine's lunch party. "He had arranged for a party of 50, and Fred made 51. So Fred and I ate lunch in the kitchen!"

Whiteley's husband, Timothy, said Van Eck's whole concept of forests that last a thousand years was quite extraordinary. "Most people chop things down," he said.

As the group headed back down to the main road, Whiteley turned back to the woods and raised her arms in the air. "Goodbye, Fred!"