At the Morris Graves Museum of Art 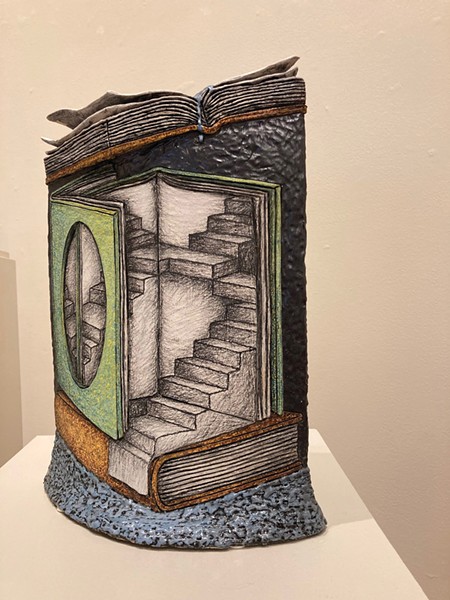 Photo by Gabrielle Gopinath Another angle on Louis Marak's 2019 "Syphon."

Louis Marak's illusionistic ceramics stretch the capacities of clay in unexpected ways. Fired ceramic slabs become surfaces to draw and paint upon. Images are full of illogical juxtapositions. Even when this is not the case, the way the pieces play at being both objects and images yields surreal results. Glazed bowls, reliefs and ceramic slabs are painted in perspective, with vanishing points and implied orthogonals indicating recessed space. Shallow surfaces appear to roil with objects. Details in the carving are rendered in low relief, so actual shadows make bits of the trompe l'oeil pop. Even functional items like bowls contain grace notes of relief that support the story the objects tell — making a fishtail appear to flip, or a drop of water spill. In several artworks, deep space is implied but then cordoned off by illusionistic drapery slung across a painted dowel. Most freestanding pieces are shaped like pedestals or monumental slabs. Most are a couple of feet high. Marak makes cartoons at 1:1 scale and uses them to lightly incise drawings into leather-hard, press-molded clay slabs just half an inch thick. He builds on these slabs by using low relief to create contour lines and textures.

One thing that emerges from this retrospective overview is the consistency of the artist's approach. "Holey Holy Water Box" (1990) deploys a torrent of actual 3D effects alongside illusionistic ones. A three-dimensional clay slab about 2 feet high masquerades as a two-dimensional rendering of a low table, which then poses as a 3D table — not just from one vantage point, but when viewed from three distinctly different angles. All these possible views are conjured by a parallelogram-shaped fired ceramic slab with textured stippling reminiscent of terrazzo. The glaze palette, dominated by silver, bronze, peach and pistachio, will remind many viewers why they loved the 1990s. "Syphon," from 2019, pulls off a similar sleight of hand. Its central vignette — a hand reaching underwater to convey the eponymous siphon tube through a series of floating slabs — is rendered with anamorphic distortion that makes it appear realistic from the front, but vertically compressed when seen in an oblique view from the left.

Perceptual tricks like these have become hallmarks of Marak's art. A retired faculty member at Humboldt State University who ran its ceramics lab for nearly 40 years, he grew up in a small town in Oklahoma but developed his style in the heady atmosphere of Northern California in the 1970s. Regionally, the example of Peter Voulkos loomed large. In the 1960s, a generation of Northern Californian artists had changed the clay game by investing this erstwhile "minor art" with seriousness of purpose and an abstract expressionist ethos. They made non-utilitarian ceramics that prioritized process, jettisoning the utility earlier generations working with clay enshrined as paramount. From early on, Marak's work was process-oriented and disinvested in traditional vessel forms — although it also eschewed big expressionist reveals, evoking more of a trickster's sensibility.

Many artworks here bear punning titles — "Booked Flights," "Heads or Tales," "Water Mark" — representing their depicted actions. The surreal character of their imagery underscores the fluid nature of language, the way we can collectively agree to let meanings slip and slide. Puns switch words' meanings around and cause them to misfire in potentially interesting ways. But if punny titles describe these artworks' content, they also analogize Marak's approach to the medium. It's a little perverse, making fired ceramics that you need language to get to the bottom of. As a project, it runs parallel to the 1970s paintings of words made by Marak's sometime fellow Oklahoman Ed Ruscha and the series of punning selfies Bruce Nauman staged in 1966-67, poised precariously betwixt highbrow and cornball. Pottery is traditionally characterized as the most material and utilitarian of the arts (it's literally earthy). Taking clay and making it serve the ends of intellectual artifice is making a statement that is contrarian, if not outright oxymoronic.

In the statement that accompanies this exhibition, the artist notes that his "illogical, nonsensical visual riddles" are inspired by the Buddhist koan, a short teaching story or parable that narrates the stoppage of thought by impeding circuits of cause and effect. (In one of the best-known koans, an earnest student asks his Zen master how he can attain enlightenment and gets slapped in the face by way of reply.)

In these artworks, slapstick comedy characterizes protagonists' Sisyphean struggles. An implied first-person point of view is reinforced by the fact that human presence is indicated not by faces or figures, but almost always by hands. When they appear, they are never idle, and many of the tasks they execute are somehow hydraulic in nature. They struggle to plug a leak or position a siphon tube, or labor in vain to stop the overslop from a pail. Emphasis on containment and control extends to other objects of representation as well. This world teems with tunnels, ties, vessels, pipes and laces. Most of the objects and animals that appear in these compactly designed environs are torsioned, trapped, bound or tethered in some way.

Surrealist comedy reigns, off the bat. Looking longer, darkness becomes increasingly apparent. Everywhere the eye confronts closed boxes, blind passageways, trapped animals and groping hands. Imagery can tip into the nightmarish; this show serves up a parade of suspended fishhooks, trapped and entangled birds, and landed trout desperately jackknifing round a central gyre. Tasks that busy the disembodied hands have the eerily precise yet incomprehensible nature of tasks in dreams: For some undisclosed reason, hands must struggle to shore up pipes or deconstruct segments of a matrix-like cage, while torrents of water keep spilling everywhere. Hands, birds and trout often appear to be suspended in this struggle as if frozen in time, flexing against implacable restraints or unstoppable flows. Is this a Promethean celebration of the human project despite, or because of, our built-in, potentially catastrophic flaws? Is it a gambit that seeks to highlight the Buddha's precept that life is suffering, leaving viewers craving restful stasis after all this striving? The exhibition's strength lies in the fact that it can simultaneously sustain both reads.

Louis Marak's "Visual Riddles" is on view at the Morris Graves Museum of Art through Sept. 5.

Gabrielle Gopinath (she/her) is an art writer, critic and curator based in Arcata. Follow her on Instagram at @gabriellegopinath.