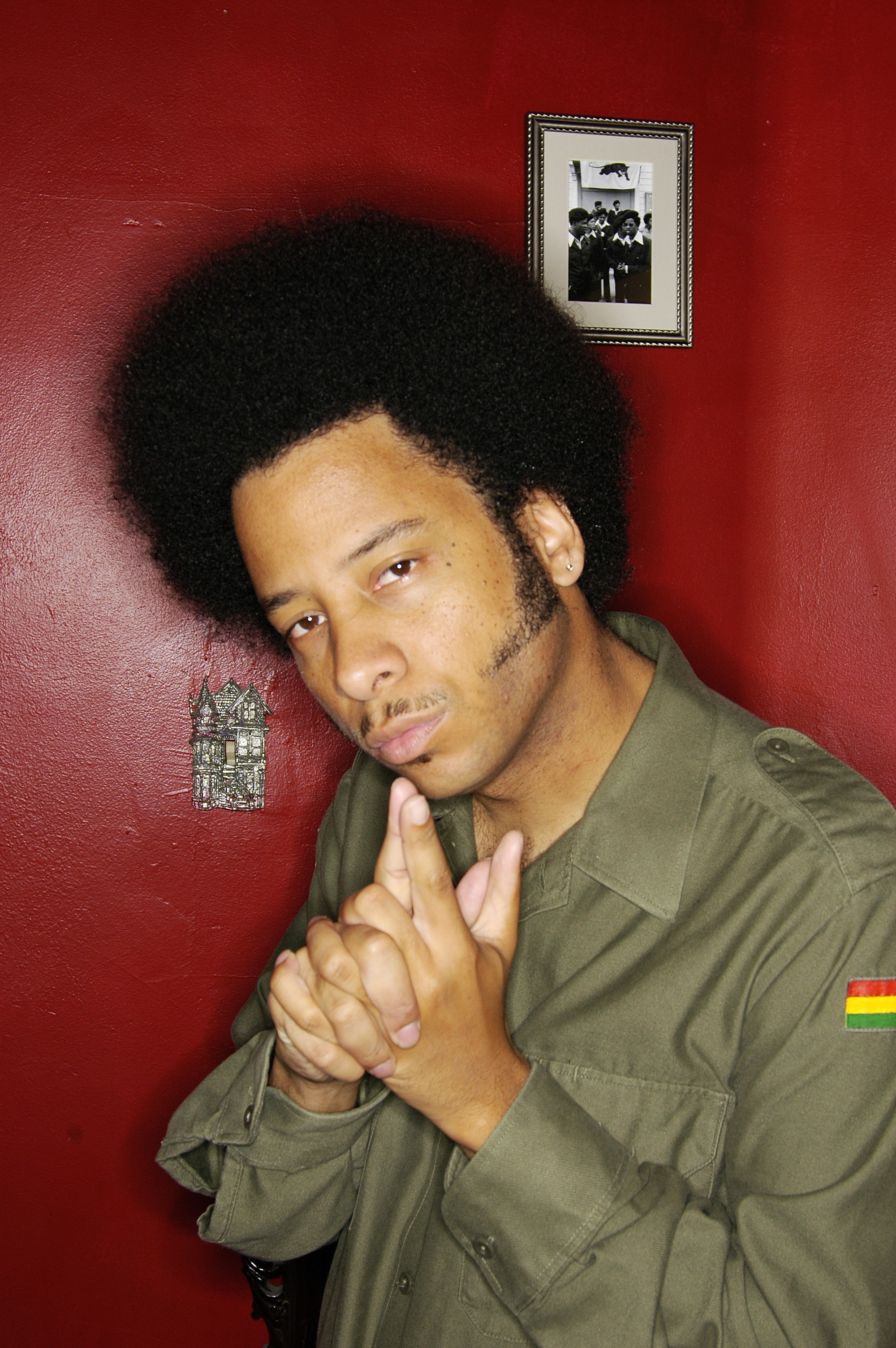 They're calling next Tuesday's show at Humboldt Brews the "Valentine's Day Love Ball." That is indeed V-Day, but don't expect Oakland's political hip hop band The Coup to stick strictly to love songs. Formed 20 years ago by Marxist rappers who grew up in the city that spawned the Black Panther Party, The Coup kicked off its recording career with an album called Kill My Landlord. More recently, frontman Boots Riley has been working on a musical collaboration with Tom Morello from Rage Against the Machine and getting deep into Occupy Oakland. In fact, he's had the Occupy/99-percent mindset for years.

"Right now the government in place is supposed to serve the people, but we know that it's really there to protect the interests of a few people -- the big bosses, the ruling class -- from the rest of the people," he told me when I spoke with him before another Humboldt visit, long before the days of OWS or OO. "We need a system that's a real democracy ... We need for the people to democratically control the profits that they produce as workers -- that's real democracy: economic democracy."

Not that Boots is only serious and political. He's been working for years on a long-awaited Coup album, Sorry To Bother You, which will serve as the soundtrack for a dark, comic indie film (same title) about Boots' experience as a telemarketer -- with a cast that also includes twisted comics Patton Oswalt and David Cross. At any rate, that's one choice for a Valentine's Day date.

The Jambalaya has a "Valentine's Day Massacre" that night, a multi-faceted, all-local review assembled by Don Husman of In Human Creation, who promises "mischief and all around strangeness." You get folk rock by Men In Pink, punk rock by Twist of the Python, tropical rhythms by Steel Standing, the comedic stylings of Joe Deschaine from Ba-Dum-Chh and lots of flesh: bellydance, hoopdance and/or burlesque from Va Va Voom, The Deadly Dollies, The Pretty Little Girls, Megz, Nina Betina, Z.Z. LaRouge, HoopDreamer, Sarah Lee, Mz. Butterkup and Silky Smith and Lex from Blue Angel Burlesque. Attendees are asked to dress for the occasion: "Formal wear and costumes highly encouraged." Your ticket is cheaper if your outfit passes muster.

More reggae? You have JUCE and Dub Cowboy at Humboldt Brews Friday; Sister Carol at the Jambalaya Saturday with DJ Gabe Pressure on the wheels of steel.

Eufórquestra, a "high intensity global dance music" septet out of Fort Collins, is escaping Colorado's winter cold with a West Coast tour that brings it to HumBrews Thursday night. Formed in Iowa City, the band alternates between Fela-esque Afrofunk, highlife and American-style reggae/ska/dub, all shot through with rockin' guitar. You can download its album Soup for free at www.euforquestra.com. Eufórquestra's Cali dates were supposed to pair it with Bellingham funk jammers, The Acorn Project, but because of "unforeseen personnel issues" the Washington band has regretfully cancelled its tour.

It's one of those three-band-nights Thursday at the Lil' Red Lion, with alt. country/cabaret band Gunsafe, new alt. rockabilly local band The Bandage (great name) and import Ash Reiter, described by show promoter Katie as "a super sweet indie-pop band from SF." (Ash Reiter calls its sound "California groove music/indie pop/rock/beach.") Lead singer Ash does indeed have a super sweet voice. After touring solo and working with assorted sidemen, she has settled in with what she calls "a cozy little family of musicians," including her drummer/boyfriend Will Halsey, brothers Drew and Scott Brown on guitar and bass, and "the bearded baby of the band," young Anthony Ferraro on keys.

He's kind of cute in his dinosaur suit, but electro-producer Mochipet can also lay down some intense dance grooves. Mochi returns to Humboldt from his lair in the Bay Area for a Thursday show at Nocturnum with vocalist Ill-esha. Humboldt's own Masta Shredda is up first. Yes, there's a light show (with lasers).

The local experimental instrumental jazz/funk/jam outfit Spilling Nova is playing what guitarist Taduz Lemke tells me "could be our last show here locally" on Friday, Arts! Arcata night, at The Mischief Lab's F Street warehouse. "Our bassist is moving down south for his master's degree. Keyboardist has to move to the Midwest to be closer to his daughter, and I am moving out of state as well. Drummer will stay in Fortuna," explained Lemke, who is not calling it quits. "We'll still collaborate on recording projects with the Spilling Nova name, and continue to market our albums, and as we get accepted to music festivals, we'll get together for those." Free T-shirts, stickers and S.N. CDs to those who show up Friday. "We will also have mind-bending visual imagery on the big screen from our friend VJ Chris," he added. "Music starts at darkthirty."

Across town at the Jambalaya that Friday night, it's the return of Moo-Got-2 -- the electro-funk band's first Humboldt show since last October. Guitarist Greg Camphuis from Bump Foundation is sitting in on a few songs; DJ Piper opens.

Valentine's is all about hearts, flowers and candy, so I suppose it's appropriate that blues diva Candye Kane is returning to the Riverwood Inn Friday night -- with Laura Chavez on guitar.

Hearts have always been popular as tattoos -- I suppose that's how the Inked Hearts Valentine's Tattoo Expo came about. The weekend-long event in Blue Lake Casino's Sapphire Palace features tattoo artists galore along with tattoo contests, a pinup-girl contest, the ubiquitous Va Va Voom burlesque dancers (Friday at 8 p.m.) and the "internationally acclaimed Pantera poledancing exhibition" (Saturday at 8 p.m. -- and, no, the band won't be there live). The tat expo ends at 10 Friday and Saturday nights, which is about when the cover bands kick in over at the Wave: Full Moon Fever's Petty trib Friday and the Eyes Anonymous '80s extravaganza Saturday.

Friday's show at the Alibi is a "Portland Invasion!" with Clampitt Family, led by guitarist/harmonica player Erik Clampitt, and The New Five Cents, both old time stringbands from PDX and both headed for this weekend's San Francisco Bluegrass and Old Time Festival, which spreads stringy music all over the city. The Arcata show also includes Colin Vance from Striped Pig Stringband with Cory Goldman, formerly of Water Tower Bucket Boys, and Gabe Rozzell, who comes from Bridgeville but now lives in Portland.

Saturday the Alibi gets "experimental" with the new Arcata prog rock band, People, Mystics in Bali (also from Arcata) and Golden Raven, allegedly "from beyond."

If English country dancing is your thing, head to the Manila Community Center Saturday night for a Humboldt Folklife Barn Dance featuring Sue Moon and The Wild Rumpus Band.

Also on Saturday, you're invited to "bring your favorite Valentine to a Roaring '20s theme dinner and dance at Trinidad Town Hall," the sixth annual benefit for the Trinidad School Education Foundation. Sweet Basil is cooking up some sort of elegant meal; Trinidad's resident soul man, Earl Thomas, provides the music. With tickets $60 apiece, it's kinda spendy, but education is a good cause. And hey, it's for Valentine's Day. Show your lover a good time.