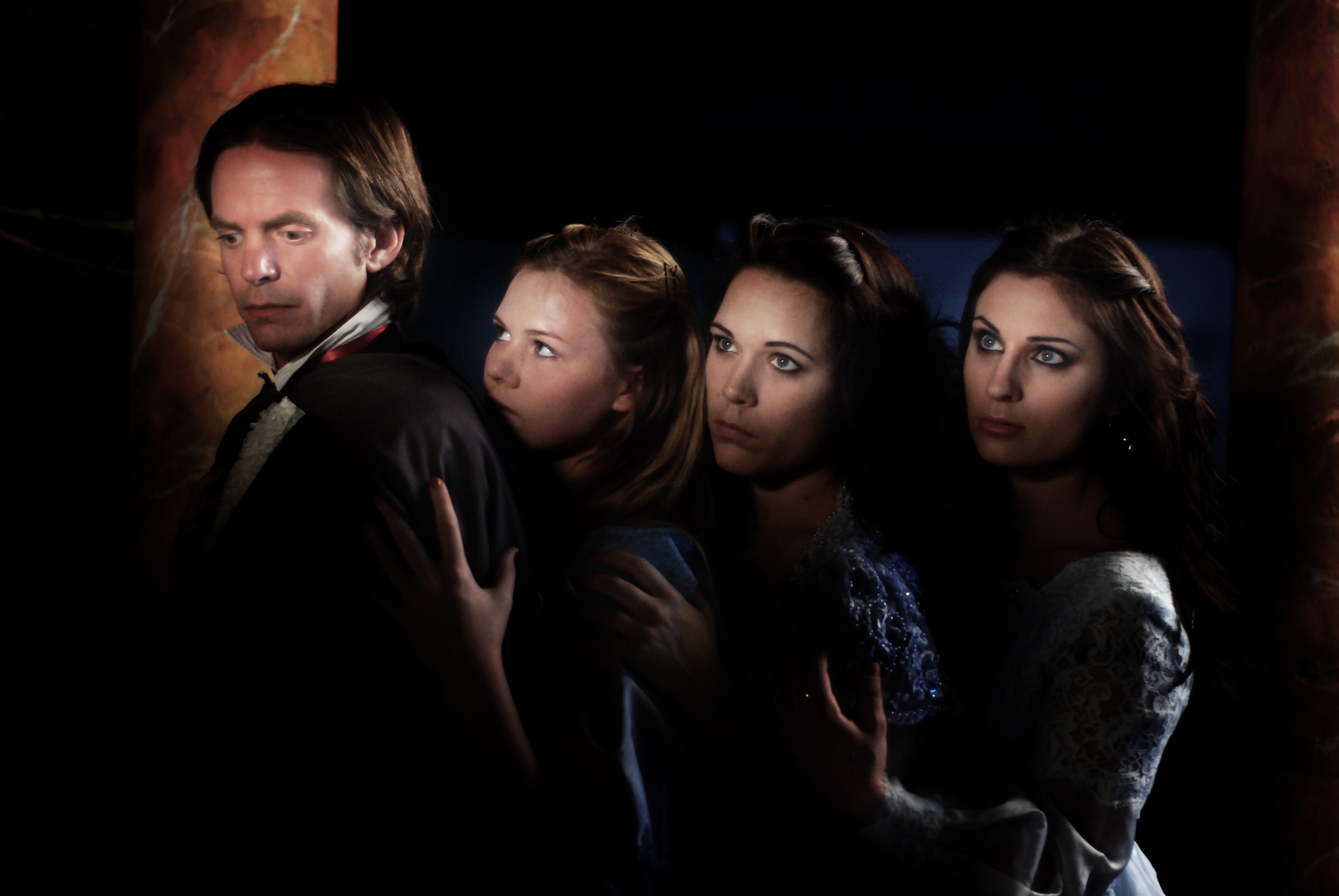 Both plays opening this week center on a man's quest for the perfect woman. One thinks he found her, only to discover after a 20-year affair that she's a man. The other has all the time in the world to search, as long as he feeds on fresh human blood.

It's a little known fact that two modern myths essentially began on the same summer night in 1816, when Lord Byron challenged his fellow literary vacationers to each write a ghost story. The result usually associated with this night is Mary Shelley's Frankenstein. But the story Byron started, which his secretary John Polidori completed became Vampyre, the first vampire story in English and the first to star a Dracula-like figure.

Later in the century came Dracula, by theatre business manager and pulp novelist Bram Stoker. Stoker never got the stage version he hoped for, so it took 20th century movies to start Dracula's career as a recurring cultural icon.

In considering the Stoker novel David Nyiri became interested in a theme the movies ignored -- the implications of immortality -- and characters that Stoker didn't develop: namely Dracula's three brides, who appear only briefly in the novel. "They've had hundreds of years of interpersonal history with Dracula," Nyiri said. "I'm interested in how that affects everything they do." Like Dracula, they must also deal with a basic consequence: "the tradeoff for potentially an eternity of romantic bliss is that you also have to become a rampant serial killer."

Though Nyiri uses the basic Stoker plot, he adds incidents and re-imagines major characters. The Brides (played by Kyra Gardner, Elena Tessler and Heather Wood) represent failed attempts by Dracula (Charlie Heinberg) to find his perfect soulmate -- and none of them are happy about it. Nyiri's play begins when all their "dissatisfactions and disappointments and anger are coming to a head."

A monster of evil or master of dark sex, Dracula recurs each time in the culture with a different emphasis. The current vampire craze focuses on romance, a theme Nyiri traces back to the 1970s Frank Langella version on Broadway when "Dracula was re-imagined as a kind of Byronic figure -- more haunted than haunting." Though his play is in this romantic mold, "I semi-jokingly refer to it as Twilight for intelligent adults."

Brides of Dracula opens at Ferndale Rep on Friday (Oct. 15) at 8 p.m. and plays through Halloween, (Oct. 31) on Friday and Saturday evenings and Sunday afternoons at 2.

In David Henry Hwang's now-classic 1988 play M. Butterfly, a French diplomat in China named Gallimard thinks he's living the imperial romance of Madame Butterfly (the submissive Eastern beauty happily yields to the powerful Western man) but he's part of quite different stories, including Cold War manipulation and intrigue. Though the powerful image of perfect love is explored along with issues of colonialism, race and gender, the first question remains: How could he not know his perfect woman was a man?

"That question carries us through the whole show: How could this be?" said Michael Thomas, otherwise known as Managing Artistic director of North Coast Rep, who is directing his first HSU play. Further complications include Gallimard's wife, his mistress and his boss, not to mention the Vietnam War.

Gallimard's perfect love is Song Liling, a Chinese opera performer he first sees in a production of Madame Butterfly, so the color and music of theatre are intrinsic to the story. But more questions ensue from that first one, and for Thomas this is a virtue. "If a play gives us some juicy things to think about, to ponder," he said, "then that's a wonderful and successful evening of theatre. I think this play does that." That intention seems to be something else these two productions have in common.

M. Butterfly opens on Thursday (Oct. 14) at 7:30 p.m. in the Van Duzer Theatre, and runs this weekend and next, Thursday through Saturday evenings, with a Sunday matinee on Oct. 24. There is some nudity as well as adult themes, so director Thomas recommends the show for high school age and older.

Coming Up: HANDS UP!, a farcical meditation on mortality featuring two actors and 30-odd puppets by the Independent Eye team of Conrad Bishop and Elizabeth Fuller plays Oct. 22 and 23 at 8 p.m. in Dell Arte's Carlo Theatre.