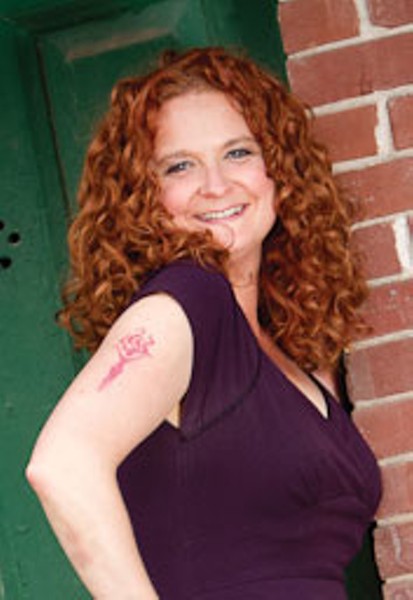 I fell in love with someone, and he's now falling in love with someone else. It's killing me. We dated for a couple years, casually at first, then by the second year pretty seriously. But we have different ideas of what we want for the future when it comes to kids and where to live. So we broke up a couple months ago. We were pretty friendly for a while. Until he got a new girlfriend. She's sweet and more right for him. I should be happy for them, except every time I see them around town happy is not what I feel. I miss him in so many ways, and I keep running into them, so it all stays so fresh. What can I do to get over him, other than keep looking for a job that will give me a reason to move away?

Dating and breaking up in a small town can really suck, and often it can feel like a minefield of exes when you leave your house.

Is moving out of the area something you've wanted to do up to this point? That seems pretty key. If moving had already been in your five-or-whatever-year plan, then sure, keep at it. But if you love it here, have a job you like, friends you like, etc., then leaving to get away from this guy and his new lady is far too drastic. It has you running from your problems, and ultimately it will probably make you feel worse, not better. You could wind up spending even more mental energy on him, with thoughts like, "Here I am all alone in [Name of City], and they're back in my beloved Humboldt swooning at each other over a Big Pete's Pizza." Not cool.

You were with this guy for a few years, and the reasons you broke up were very logical, practical ones, not heated I-hate- you-leave-me-alone ones. That makes it harder. It's so much easier to get over people that piss you off, eh? Also, it's only been a few months, so you need to be kind to yourself. Realize that just because your reasons were valid (and will remain valid; these are major lifestyle differences), that doesn't mean it's not going to hurt for a while. And that, I hate to say it, is actually OK. It means you're human. That you care for someone. That you're capable of caring for someone. These are really wonderful things that will serve you well the next time you meet someone. For now, though, it makes you feel like you're stepping on your own heart every time you walk out your door. I get it.

You will get over him. It's just not as easy as wishing for it to happen and poof, there you go. You're not walking around with hate in your heart. Be thankful for that, because that's a shitty place to be. In the meantime, avoid places where they spend a lot of time if you truly can't handle seeing them yet. And only make big life choices that you'd make regardless of him — not as a reaction to him.

I've been having issues with friends who have cell phones. The phone rings in the middle of the night and no one is on the other end. People leave messages on my machine, and I can't understand anything or figure out who it was. I leave messages on their cell phones and they call me back and didn't listen to my message. The question is: Do I really want a cell phone and why? Old school land lines rock and this instant shit is bullshit IMHO.

The complaints you cite aren't really cell-phone specific. People can call your phone in the middle of the night, mumble on your machine and not listen to your messages regardless of what phone they use, right? So, really, what we're talking about here is user error. I'm not saying you need new friends — just the problem might not actually be with the cell phones.

Your question is: Do you need a cell phone, and why? The answer is yes, because everyone needs a cell phone, even if just for safety. Once you call 911 for yourself or someone else, you realize it's not so bad to have that annoying little device. And again, like your land line, you decide when and if you answer it. You decide if you engage in text messaging. You decide if you get a smart phone from which you can update your Facebook or an old-school flip phone.

I found out through the family grapevine that my sister was reading my Facebook page and using posts and photos to find out information about me, then say mean things. (I don't post inappropriate comments. I use the "if I don't want my boss/mom to hear or see it, I shouldn't post it" rule.) My sister and I don't generally make an effort to talk to each other. We don't have any active fights. We just have a general disagreement on values and lifestyles. When I found out it was happening, I simply un-friended her. Two or three weeks later, I got a message from her that said, "You don't want to be my friend?" I haven't responded. I feel confident with that decision, because nothing good can come from saying "no." Nothing good could come from telling her where I'm getting the information. What would you do?

— Don't Really Have Time for This

Don't Really Have Time For This!

Ohhhh, the family grapevine, eh? It has long, gnarly roots for most of us, and when you add the social media dynamic, well, you'd be better off shaking up a bottle of baking soda and vinegar.

First, let's go to my theory of Facebook Makes Us All 12, All the Time. All of us. And if you know me, you know I love Facebook. But it still makes us all 12.

It feels like you're saying that given the choice, you wouldn't be friends with your sister in real life. That's fine. But we have created for ourselves this weird not-real-life world where we feel compelled to be "friends," and all hell breaks loose.

My first suggestion is to evaluate the feasibility of just never replying to your sister. Ever. Ever? I don't have any siblings, and I don't know how often you see/talk to your sister, but it seems like it would be easier in the long run to just plow through this weirdness and address it head on.

You have two main options here.

One: Stop protecting the person or people who conveyed the information in the first place. Nobody wants to throw a relative under the bus, so apologize first and explain that getting through the drama is the end goal. Then you're able to say to your sister, "No, I don't really want to be Facebook friends if that's what you're going to use it for."

Two: Add your sister back but use privacy settings to manage what she sees. You can set it so your sister never sees anything, or you block her from certain posts or pictures that you'd rather she not see. You can also hide her posts in your feed. That could invite the question, "Why did you drop me in the first place?" I don't have a great comeback to that that wouldn't be lying, and nothing good is going to come from lying. "Facebook accidentally deleted you" isn't a thing. Don't even try that.

My take is this: You pretty much have to have the awkward conversation, and it'll probably come out who was sharing information. Then, you just talk about it. Like families do. After that it's up to her to be a grownup and accept the consequences of having acted like a 12-year-old.

Jessica McGuinty, founder of Jessicurl and master of the joyful laugh, doesn't really think she has all the answers — but she'll give it a try. Write her at heymcguinty@northcoastjournal.com.