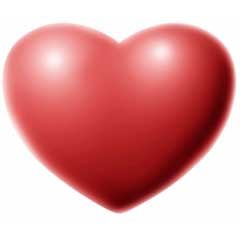 How did the heart become the symbol of love, the supposed romantic focal point in our bodies? It may trace back to a time when the heart was considered the center of thought, because surely love is something that comes from the mind. But when your heart seems threatened, you quickly learn how much you are loved. That's what happened to me last weekend. While visiting the Bay on alt. news biz, I was hit with a pain in the middle of my chest that the docs initially thought might be my heart. It wasn't -- the trouble was elsewhere (and I'm fine now) -- but I quickly learned how much love surrounds me. As my loving wife sped to my side (with our doctor friend in tow), close friends back home took charge of things like feeding the cat and writing this column. My coworkers rallied and covered other work chores. I felt loved in many ways. And that's a good feeling.

Of course love and romance are in the air this weekend. St. Valentine's Day may not come until Sunday, but the whole weekend seems to revolve around it.

Among the shows specifically dedicated to love etc. is a tribute to Stevie Wonder on Friday at the Jambalaya featuring The Luscious Ladies and SambAmore. Friday is also Arts! Arcata night, so they'll start with the drum/dance troupe on the Plaza luring everyone in. As you may recall, The Luscious Ladies is a spin-off from AkaBella, with a backing band that includes Aber Miller (from Bump and Vintage Soul) on keys, guitarist Jesse Elias (Weather Machine/Berel Alexander Ensemble), John Severn (Kulica) on sax, Shasta Kersh (Massagana/Ponche) on bass and legendary local drummer Mike Meyers. Expect guest vocals from Berel Alexander and Madi Simmons.

Why music by Mr. Wonder? "Stevie is the ultimate romantic," said LL Melody Walker,  "but we're not just sticking to his sappy stuff -- we went with super danceable crowd-pleasers to keep the floor moving all night. We will also be doing other sexy/funky favorites from Chaka and Prince, and everything from classic jazz to reggae."

Mr. Alexander has his own Valentine plans, a pair of concerts -- Saturday at the Arcata Playhouse and Sunday (V-Day) at the Morris Graves Museum -- with the Berel Alexander Ensemble's "Vintage Valentine" featuring music from their album Hooked (yes, there are love songs) etc. "We're covering Etta James, 'Sunday Kinda Love,' a Chilean folkloric love song in Spanish, and some classic Bob Marley lovers rock," noted Berel.

It's not a Valentine thing at all, but the show Thursday at Red Fox Tavern should be killer. Self-described "heavy, heavy Afrobeat" band Albino! headlines with the above-mentioned AkaBella opening, thanks to former Arcata resident and Afromassive bassist, Aaron Bortz, now plays with Albino.  They come with a new release in hand, Peralta House, along with the designation "Best Band of the Bay," as voted by readers of the East Bay Express (who, BTW, were our gracious hosts last weekend).

The old phrase, "wear you heart on your sleeve" takes on new meaning in the hands of a tattoo artist. Hearts will no doubt abound at "Inked Hearts: A Valentines Tattoo Expo" running Thursday through Sunday, mostly in the Blue Lake Casino's Sapphire Palace. The main focus is on inkers with booths galore, but there's also music, etc. Friday local hip hoppers Never Die play at the show (7 p.m.) with Redding rock trio The Billies in the Wave later. Saturday, various tatted Humboldt Roller Derby stars appear in the afternoon (1 and 4) and Side Iron rocks twice (3 and 6). Surf instrumental band Robbie Allen and the Outer Edge is in the Wave (appropriately) Saturday night (they also play Friday at Six Rivers) and there's an after-party at the Pearl with Jsun. Sunday (Valentine's Day) bellydance queen Shoshanna and company shake it at noon, followed by 4 Star Bravado (at 2) and White Trash Country Club (4). I suppose somewhere in there you could get a heart tat (there will be temps if you don't want to get permanent).

The tide of electro, dubstep, drum 'n' bass and house music seems to be rising to flood stage. Among the upcoming choices: Rebel Bass Collective presents "Here Come the Klowns" Thursday, Feb. 11, at Arcata Theatre Lounge with Gooferman Micro-Circus and Band, plus T-Dub and Tornado Rider with the mad cellist Rushad Eggleston.

Friday, Glitches in the Switches brings Gaslamp Killer, 12th Planet and Bounca to ATL for the ROOR glass launch. Meanwhile World Famous Productions has VibeSquaD, Resident Anti-Hero and the amazing Lazer Sword over at Nocturnum.

"Survivor" Courtney Weaver is home safe and sound and on the mend, but the benefits (and love) continue. This week it's the Humboldt hip hop community stepping up with a Friday show at the Red Fox that will include Garth Culti-Vader, Mika Sun, J-the-Sarge, Franco, Bianca Mankai, Nac 1 and Fresh Coast Connection with DJs  Just-1 and GMG.

Looking for some old-fashioned rock? Saturday at Humboldt Brews, catch Zepparella, "four women intent on bringing the passion, the beauty, the aggression, the musicality of Led Zeppelin alive."

Chris Wixson's Speakeasy Saints play literally all over the county this weekend with special guests Lenny Petinelli "on tha ivories" and trumpeter Brandon Lewis. Thursday they're at Six Rivers McKinleyville, Friday they're in Garberville at Cecil's, Saturday they head out to Simon Legree's in Burnt Ranch to play "some funky-blue-tinged groove music for your hearts and souls... and to celebrate Life and Love!!!"

Reggae? Messenjah Selah is out 299 at Simon Legree's Friday. Saturday at Arcata Theatre Lounge Lion's Den Entertainment presents Italian Rasta singer/multi-instrumentalist Alberto D'Ascola Alborosie, aka Alborosie backed by The Shengen Clan with Beatnok and AkaBoom Sound on the system. There's other reggae news, a cancelled Capleton appearance and more, but we'll get to that next week.

Of course V-Day is not the only holiday coming up, Tuesday, Feb. 16, is Fat Tuesday, aka Mardi Gras. Six Rivers is celebrating with "Fishnets and Feathers" the fourth annual show by the flashy samba percussion and dance troupe Samba na Chuva, this time with Slippery Society, "a local jazz band playin' New Orleans-style tunes," plus a raffle and photo opportunities with "Carmen Miranda" with money going to Haiti relief.

No Mardi Gras connection, but Jerks of Grass, a fine bluegrass band from Portland (not Ore, Maine this time) stops by the Riverwood Inn next Tuesday, Feb. 16.

Last but not least, the juniors and seniors of Northcoast Preparatory and Performing Arts Academy present an evening of dinner theater at Abruzzi. The play, Wandering Appetites, is a cabaret adaptation of three separate works: The Sound of Music, Fiddler on the Roof and Gunter Grass' The Wicked Cooks. The show is sold out this weekend, but they've added performances on Tuesday and Wednesday, Feb. 16 and 17. Call for reservations. They ask, "What is more universal than sitting down with friends and family to enjoy a meal?" Well, love, but I suppose that's part of it.