Buying flowers for the beloved and putting people to work 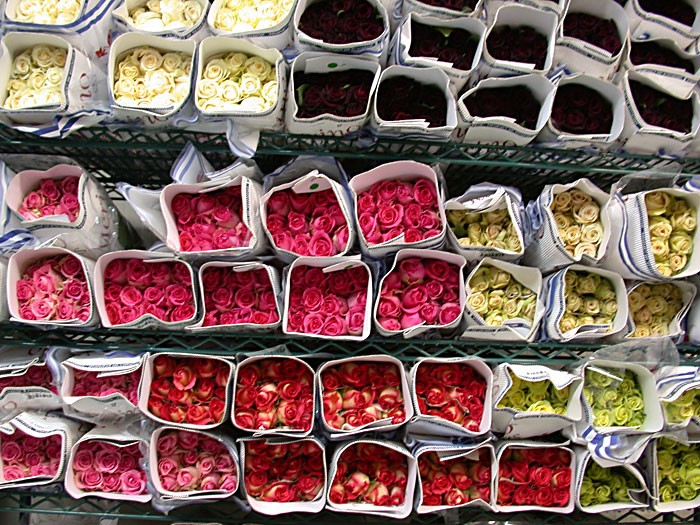 It's been three years since Flower Confidential was published, and in that time I've come to expect a few calls from reporters around Valentine's Day looking for a comment on so-called "green" issues in the flower business. The narrative in the media has shifted somewhat over the last few years; it's moved from "behind every flower is an exploited worker and a poisoned river" to "the flower industry is finally going green." This new narrative usually includes some discussion of eco-label programs like VeriFlora, which certifies that flower farms both here and overseas comply with labor and environmental standards. It might mention the Fair Trade program, which now certifies flowers the same way it certifies coffee and chocolate.

And, thanks to the local food movement, there is always some mention of local and seasonal flowers.

Those of us who live on the West Coast have no trouble buying local flowers almost year-round. For us, even in winter, flowers either come right out of our gardens and fields, or they come from nearby commercial flower growing operations -- the few that have survived even as the flower industry has moved south of the border.

Anybody else who wants to buy local at Valentine's Day will have to get creative. If you are in, say, Minnesota and you want to buy something romantic, vegetative and local for your loved one, you're probably going to need to cruise through your local nursery and hope they've got some potted tulips or cyclamen in bloom. Those might not be the traditional Valentine's Day flowers, but supporting local farmers means buying seasonally, and that means giving up on the idea of roses in the middle of February.

But there's more to the question of local versus imported flowers, and this is not a narrative that has made its way into the media as much. When I went to Ecuador to visit flower farms, I expected to be horrified by the conditions there and to come back firmly on the side of buying only California-grown flowers. What I found instead was the same mixed bag I'd already seen in California. Some growers were producing beautiful organic (or nearly organic) flowers, treating their workers well, paying decent wages, doing nice things for the environment and the community, and generally behaving in the way we would like farmers everywhere to behave. Other growers -- both there and in California -- were not only oblivious to the fact that they could be growing flowers in a more environmentally friendly way, they were actively hostile to the notion.

The next surprise was that the workers themselves didn't want their jobs to go away. I realized that it was easy for me, living in the relative comfort that most Americans do, to simply decide that a job on a Latin American flower farm was inherently exploitive and unsuitable, and the workers on those farms should go off and do something else for a living. I hadn't worked out what exactly they might do. And I didn't understand, until I got there, that a job on a good flower farm could be the ticket to day care for children, basic medical care, hot meals and shower and laundry facilities, not to mention a wage and the ability for the family to stay together in their hometown rather than split up in search of work.

Which brings me to Haiti.

I don't pretend to know anything about what Haiti needs or what ought to happen next. But I do know that many countries -- including our own -- got their start toward a stable economy by figuring out something that they could export to nations that had more money than they did. Surely the same will be true of Haiti.

Since the earthquake, the floriculture industry has been abuzz about Double Harvest, a Haitian greenhouse operation founded by the Van Wingerden Greenhouse Company in North Carolina. The Van Wingerden family established it in 1981 as a charitable endeavor that would combine greenhouse jobs with medical services and housing, creating some sort of stable life for as many people as the 200-acre operation could support.

While they do grow flowers and ornamental plants, they also produce quite a lot of food, which then feeds the workers and goes out to vendors who sell it in local markets. And they grow trees for much-needed reforestation. A product called "Haiti Mix," made from sugarcane waste and rice hulls, is made on-site for potting soil mixes. Because they have clean water, good roads and a generator, Double Harvest was able to step in immediately and help relief efforts after the earthquake.

A project like Double Harvest can only do so much. But if a little sustainable agriculture were to take off in Haiti, and if exporting a luxury crop like a flower helped finance the operation, I wouldn't object to seeing Haitian roses for sale at Valentine's Day. Would you?