Lunch and Legacy at Chin's 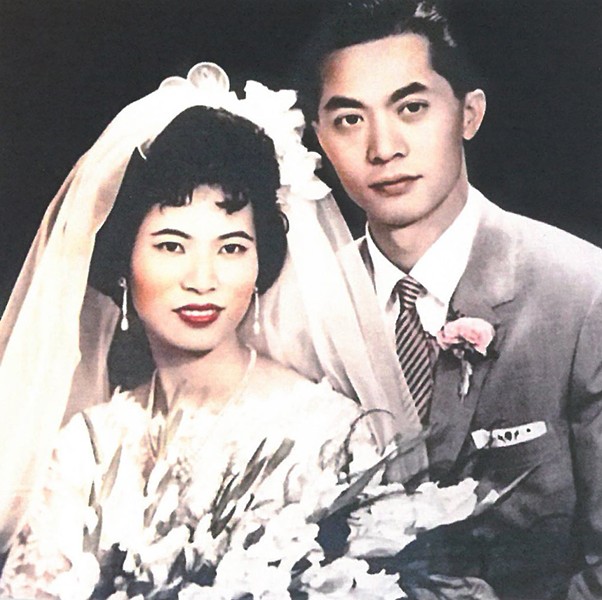 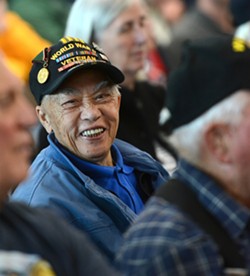 On a Monday afternoon, Mary Chin sits in the back corner booth of Chin's Café, her coiffed silver hair bright against the orange vinyl. It's been two weeks since her husband Ben Chin died on May 20 at the age of 97. Beside her sit her sons Ben Chin Jr. and Don Chin. Mary's niece (and a frequent Journal contributor) Wendy Chan leans on one elbow across the table.

The Chin family still owns the building but it's been nearly two decades since she and Ben Chin Sr. ran the Chinese restaurant and adjacent hotel on Broadway in Eureka. But from 1970 to 1990, when he sold the business to Chan's family, Ben Chin Sr. was a fixture there. There and at his previous restaurant Canton Café, he cooked more than one generation of locals their first Chinese meals and paved the way for other cooks, immigrants and entrepreneurs to follow.

At the age of 12, Ben Chin immigrated to the U.S. from rural Taishan in Southern China's Guangdong Province, where he was born in 1922, and settled in Portland, Oregon. His family worked in the restaurant business, one of few exceptions to the Chinese Exclusion act of 1882 that banned Chinese immigrants until 1943. During World War II, he left U.S. soil again to serve in the Army in France, Italy, Germany and North Africa.

In 1954, with plenty of restaurant experience under his belt, Chin learned of the total absence of Chinese places in Eureka and decided to set up shop in town. What he didn't get wind of was the reason for the market void: In 1885, when Eureka was still a rough and tumble city of bars and brothels, City Councilmember David Kendall was killed by crossfire in a gunfight between two Chinese men on the then-Chinatown block of F and Fifth streets, where a mob of some 600 white people soon descended. A gallows went up with a sign threatening hanging for any Chinese who remained. In 24 hours, Chinatown was empty, its 300 men and 20 women leaving what they couldn't carry for a pair of San Francisco-bound steamships waiting out a storm in Humboldt Bay ("The Chinese Expulsion," Feb. 27, 2003).

There were few landlords willing to rent to a Chinese American but when Ben Chin set up the Canton Café on Fourth Street (where Bikini Brews now stands) with a couple of partners, he was undaunted by the lingering racist hostility, which mostly came by telephone. "People would tell him to get out of town, 'Go back where you came from, We don't want you here,'" says Ben Jr. "Sometimes he'd hang up, sometimes tell them they were cowards for not coming and saying it in person."

Mary nods, adding that Ben Sr. had told her the support of former Mayor George Jacobs helped but the city, hesitant to let too many Chinese people back into town, only let him hire one cook at first. Eventually he hired more, though, and a handful of his cooks and partners went on to start their own places, with Gene Hoy who continued to run Canton Café, Gigi Wong at Far East in Eureka and Bill Young of Young's in Fortuna among them.

Mary's given name is Miu Shi — Mary, she says, is the name a judge gave her when she received her U.S. citizenship in 1962 after they married in Hong Kong. "We knew each other only a few weeks and we got married," Mary says with a shrug of her narrow shoulders. In China, her shop owner parents were forced into farming by the Chinese Revolution and were very poor. She escaped China by boat to British Hong Kong via Macau and was introduced to Ben Chin, who was looking for a wife after his second divorce, by her aunt and his uncle. "If somebody come from America to marry me, OK, I don't care," she says with a laugh that spreads to the rest of her family in the booth.

"We get along," Mary says between sips of oolong tea, adding that she did her best to lighten her husband's load at the restaurant. At 40, he was 17 years her senior but "looked 30-something," she says. "Because he's older than me I wanted him to live longer." She says they helped each other out, taking a turn tossing rice in the enormous woks when the other's arms grew tired.

Don swipes at his phone until he can find his parents' wedding photo — Ben cutting a dapper figure with strong eyebrows and Mary downright regal in her gown, with the high cheekbones that remain relatively unlined at 80.

Wendy Chan asks if anyone wants food. Everyone says no but she orders a handful of dishes anyway. Soon she's dishing chow fun, mango chicken and green beans with black bean sauce onto plates, the men resisting mostly in vain. 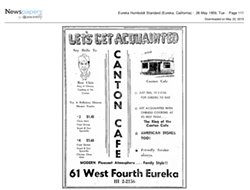 At Canton Café and Chin's Café, "It was basically the Chinese-American cuisine that was big in Oregon," says Ben Jr. Like most Chinese restaurants in the U.S., the menu had to strike a balance between introducing the novelty of Chinese flavors without anything too challenging for mainstream American palates: "Chow mein, chop suey, mafa chicken, sweet and sour spare ribs."

"With the brown sauce," adds Chan, grinning at the mention of the spare ribs. "Nobody makes that anymore. That was Ben's specialty." She remembers seeing him eat the vinegary mixture over rice, claiming it kept him young.

"The No. 3," they say one after another, recalling the most popular order: pork chow mein, fried shrimp with a paper cup of cocktail sauce and hot mustard, and sweet and sour spare ribs. Don winces remembering how the fumes from mixing up batches of mustard would burn your eyes.

"He didn't cook at home," says Ben Jr., waving a hand toward the kitchen. "This was home." But between shifts in the back, the family ate homestyle Chinese dishes, salted fish and the coveted browned rice from the bottom of the pot. Don and Chan add that his hamburgers and chicken fried steak were solid, too.

Ben Jr., who's now a retired University of California administrator, worked in the restaurant from the age of 14, starting as a dishwasher, and Don, now a local Realtor, was washing dishes and at the register when still young enough to need a chair to stand on. Everyone pitched in with the sometimes backbreaking work of cooking, waiting tables, cleaning and maintaining the motel. "I thought working a 54-hour work week was normal," Ben Jr. says. Still, he's grateful his parents "instilled in me family helps out family."

"He taught me to treat the employees like family," says Mary. In fact, the restaurant employed a number of family members who immigrated from China with the help of the family's sponsorship.

Chan, who worked as a waitress at Chin's before her family bought the business and ran it in the '90s, says, "He helped me with my English. And the jokes."

"Hopefully not the dirty ones," says Don.

Chan bats at the air. "Of course, the dirty ones." Turning to Mary, she says, "I remember he was always so funny. Was he funny when you met?"

Mary considers for a moment before she replies, "No," and everyone laughs.

Ben Jr. maintains that even though he wasn't cut out for a life in the restaurant business, his father is still one of the best bosses he ever had. "He lived by example," he says. Besides, he says, "How many kids get to say, 'Yeah, I worked side by side with my dad during a Friday night rush?'"