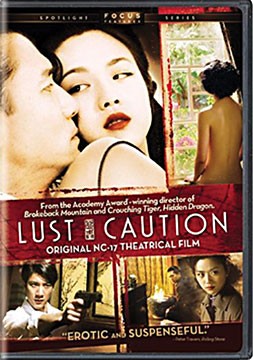 Lust, Cautionis Taiwanese director Ang Lee's second movie with a comma in the title (Crouching Tiger, Hidden Dragon). It's also his second film about two people cautious to engage in what is ultimately destructive love (think Brokeback Mountain). In Lust, Caution Lee combines the acrobatics of the first film —this time sexual, earning it its NC-17 rating — with the repression and pregnant silences of the second, and sets them against the backdrop of a World War II-torn Shanghai, where glitzy cafes continue to serve coffee in delicate china cups while men die of hunger in nearby alleyways. The film never played in local theaters (too much lust, caution?) but now it's available for rent.

In Lust, Caution, Mrs. Mak, the wife of a Hong Kong businessman, is having an affair with Mr. Yee, a Japanese collaborator. Mak — in reality a demure college thespian, Wong Chia Chi, turned spy for the Chinese resistance — has no idea that she will end up falling hopelessly in love with the sadomasochistic Yee. Nor could the cautious bordering on paranoid Yee have ever imagined that he'd be inveigled by a coed with a penchant for nationalist theater.

The film is based on a short story by Chinese author Eileen Chang, whose works often focused on female characters in 1940s Shanghai and Hong Kong.

As a spy thriller, the movie is not a complete success. Clocking in at 158 minutes, it lingers too long to really get your heart pounding. But it's in a handful of languid drawn-out moments — like watching a cigarette burn slowly, the ash growing precariously long but never quite crumbling off — where the movie really shines.

The film opens with four women playing mahjong (a Chinese version of rummycube). In any other movie, the scene would be static and unmemorable. In Ang Lee's hands, it unfolds like a cinematic version of Nikoly Rimsky-Korsokov's orchestral interlude, "The Flight of the Bumble Bee." Lee clearly has a knack for turning the mundane into poetry. For some, though, two and a half hours of poetry may be too much.

Yee is played by Tony Leung, whose stoic character held together Wong Kar Wai's understated romance 2046. And Mrs. Mak is played by first-time actress Wei Tang, who does a marvelous job of navigating her two diametrically opposed characters — the ing?©nue Wong Chia Chi and the seductress Mak — as they tragically spiral into one another. It's refreshing that Ang Lee didn't choose to cast a more conventional Chinese leading-lady like Zhang Ziyi in the role. Then again, perhaps Zhang wouldn't have been willing to bare as much flesh.

Lust, Caution was raked over the coals by some movie reviewers when it first appeared in the theaters. They were mostly disappointed by the less-than-erotic soft-core sex scenes. (If you're looking for an erotic WWII spy film rent Paul Verhoeven's Black Bookinstead.) However, in Lust, Caution, sex serves not to arouse lust, as the title would suggest, but rather to peal away at Yee's personality like an onion, undressing the calculating bureaucrat to reveal a desperate lover. We come to realize that each new layer reveals more lust, caution, and eventually no core at all. Unfortunately for Wong, she realizes too late.