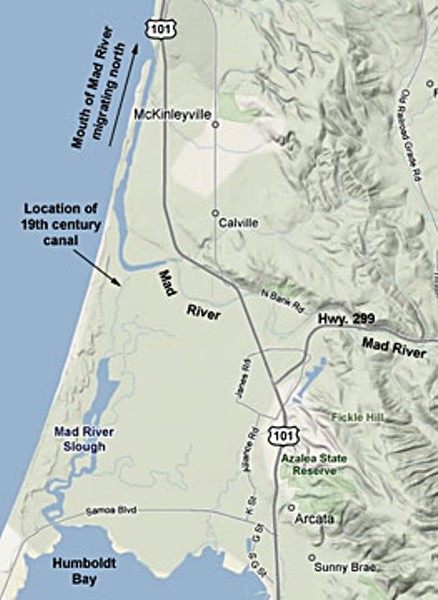 The first time I kayaked up the Mad River Slough, which empties into Humboldt Bay about three miles west of Arcata, I was told that this was the old Mad River channel. Of course, the Mad empties into the Pacific directly now, across from Arcata airport, but if you look at the accompanying map, you'll see that it makes total sense to assume that the river used to flow into the bay. (And why would it be called the Mad River Slough anyway?)

Not so fast! says HSU geologist Dr. Andre Lehre. There's no geologic evidence that the slough was once the river channel, despite local lore to the contrary. Sure, the slough sometimes acts an overflow channel, but there's a gentle low geological anticline, or up-arching of the deposits, separating the slough and river. They were once connected, though: Around 1855, early settlers dug out a canal between the two so they could float logs from the Mad River to the saw mills on the edge of Humboldt Bay. By the turn of the century, the canal -- which was controversial and never really successful -- had fallen into disuse and silted up.

The Mad River starts in the Coast Range near South Kelsey Ridge in Trinity County, but most of its course is in Humboldt County. The river is free-flowing for 85 percent of its entire 95-mile length, with only Matthews Dam (which forms Ruth Lake) impeding its flow. Anyone getting their water from the Humboldt Bay Municipal Water District will appreciate the abundance of the Mad River.

The "Mad" moniker derives from an incident that occurred in December 1849, when Humboldt Bay was being rediscovered by Dr. Josiah Gregg. The story is told in Lewis Keysor (L. K.) Wood's 1932 memoir (courtesy of the Humboldt Historical Society). At the mouth of the about-to-be-named river, Gregg was getting upset because he was still taking measurements to determine its latitude, while the rest of the party were eager to cross. Wood writes:

"As the canoes were about pushing off, the Doctor ... hastily caught up his instruments and ran for the canoe, to reach which, however, he was compelled to wade several steps in the water. His cup of wrath was now filled to the brim; but he remained silent until the opposite shore was gained, when he opened upon us a perfect battery of the most withering and violent abuse. Several times during the ebullition of the old man's passion, he indulged in such insulting language and comparisons, that some of the party ... came very near inflicting upon him summary punishment by consigning him, instruments and all, to this beautiful river. Fortunately for the old gentleman, pacific councils prevailed ... This stream, in commemoration of the difficulty I have just related, we called Mad River."

Gregg was dead within a couple of months. The group split into two soon after the Mad River incident, with Gregg's party turning inland towards Clear Lake. It was a harrowing trip through uncharted terrain. As they reached the lake, exhausted and nearly starving, Gregg fell from his horse. He died on February 25, 1850. Despite the above reference to "the old gentleman," he was only 44.