Madness at the Lab 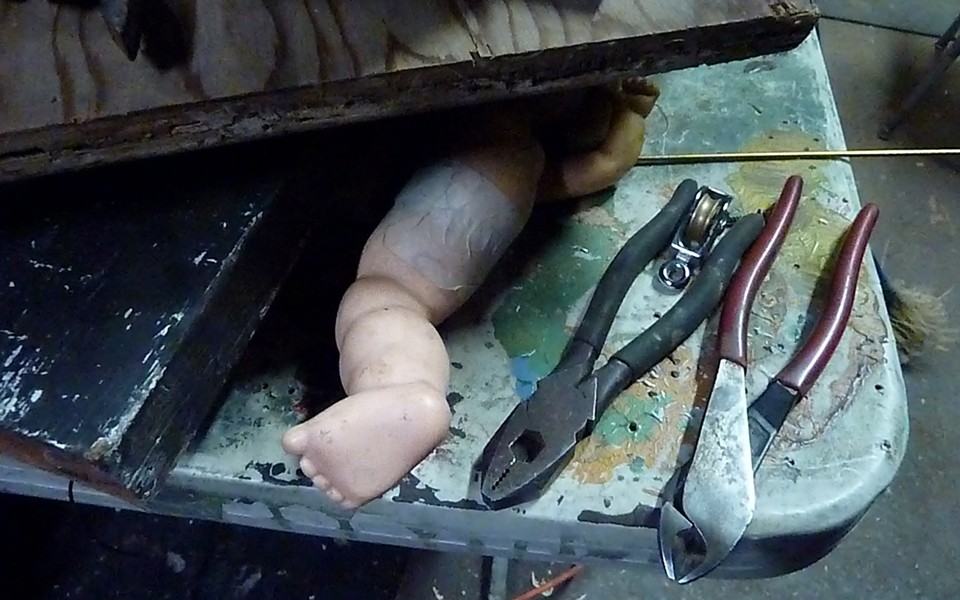 photo by Bob Doran Tools of the trade 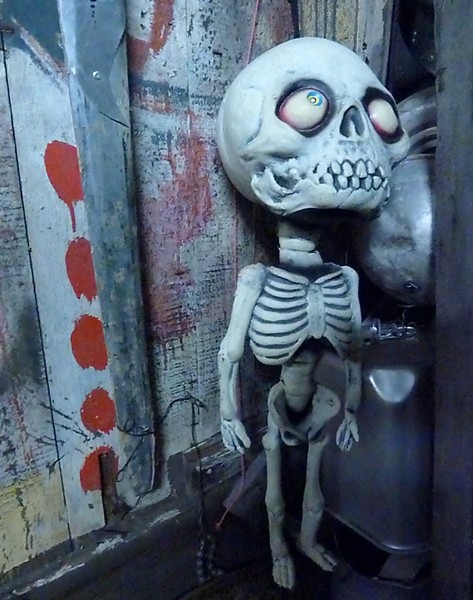 A week and a day before they launch their sixth annual Haunted Kinetic Sculpture Lab of Horrors, there was much to do. While chaos seemingly reigned, the warehouse/workshop in Arcata's industrial zone was starting to take shape. Sheets of plywood, most of it painted black, had turned the large room into a maze leading to various Halloween-esque tableaus in the making. The mad scientists of Kinetics were hard at work.

Near the entrance Ken Beidleman sent sparks from a grinder as he shaped a piece of metal, part of a complex articulated device that would eventually make still-unformed creatures lunge forward.

As he took a break to lead a reporter through the maze, Beidleman stopped to offer a demonstration of a repurposed toy he calls, "The Antagonizer," whose function and means of antagonism cannot be revealed at this time. (The general idea of this hall of horrors is to stimulate the senses in unexpected ways, so we'll try to avoid spoilers.)

In his back corner workspace, Duane Flatmo was working on an extremely ugly mess of fake hair, eyeballs and unknown body parts he calls "the spewing mutant." Like most of the lab, his workshop is a jumble of what might appear to be junk. As anyone who has attended the Kinetic Sculpture Race must recognize, the folks who build the fanciful human-powered all-terrain machines are veteran recyclers -- and master engineers.

Flatmo is particularly adept in repurposing assorted metal refuse. In recent years he's used pie plates, hubcaps, cake tins, bicycle parts and the like to craft a giant metal lobster and a fire-breathing dragon. Their skins hang from the rafters of the Lab along with components from decades worth of Kinetic Sculptures. The lab holds workshops and storage for five separate teams -- Flatmo's, one led by Beidleman, another by his wife June Moxon, Brian "Funguy" Slayton's,  and Mark Ritz and Charlie Jordan's Kinetic Koffee Krewe. June's giant puppy is in evidence;  last year's Day of the Dead taco wagon hangs in Mark and Charlie's corner.

As Flatmo explained, other racers without year-round workshops stash their parts there. "We even have some of Hobart's old stuff," he noted. "We didn't make all of this up just for this. This stuff is pretty scary as it is."

The annual haunted house is basically a big rent party, something they've been doing for six years now. "We all went to the old Pretenders," said Flatmo, referencing the infamously gruesome haunted house team that caused many a nightmare in years past with horrific tableaus that seemingly knew no bounds, bloody baby dolls and twisted nuns being a specialty.  "We were all well-versed on the tradition, but didn't think we'd ever do a haunted house," said Flatmo.

Beidleman explained, "We used to have an open house at the end of April, but it was too much right before the Race" [on Memorial Day weekend] -- thus the shift to Halloween. "Last year's Haunted Lab made enough money to keep us in the black until now. We're in the red again, but this should bring us out. It usually plays most of the rent for the year and the insurance and utilities and stuff."

Between various team members and other volunteers, around 25 people will assist on any given night. "Certain people fill certain niches -- not everybody's a builder," said Beidleman. "We find a place for everyone, but we have a very particular standard the way we do things -- we want to do it the Kinetic way."

"We could tell someone, 'Build a scary monster,' but it wouldn't be up to the standards we want," added Flatmo. "So Ken and I end up doing too much."

The results are in frightening evidence everywhere you look with monsters, skeletons and baby doll parts awaiting deployment.

"We don't want it to be cartoony," said Beidleman as he showed off an element of one tableau. "We want more shuddery."

Fair warning, if you suffer from serious claustrophobia or arachnophobia, your buttons will be pushed. Same with emetophobia (fear of vomiting) and coulrophobia (fear of clowns) and a few other phobias that have no name.

Early arrival is advised since the lines tend to get long. Opening night, Thursday, is also recommended. "We figure our big nights will be Friday and Saturday," said Beidleman. "If Halloween being on Sunday makes that slower, it's OK. We'll be frazzled by then."

The Haunted Kinetic Sculpture Lab is open from 7 p.m. until midnight "or so" Thursday thru Sunday, October 28-31, at the Arcata Kinetic Lab, near the corner of 8th and N streets. Admission is $10. Due to the nightmare factor, the experience is not recommended for kids under the age of 14. For further information call the Lab at 822-4805 or go to www.kineticsculpturelab.com.