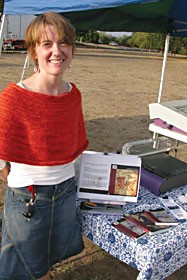 Daddy, says Peter, I wish I could have another pretty little Picture-Book, for I have read Mrs. Lovechild's Golden Present so often, that I can repeat it without book. I am very glad to hear it, Peter, says his father, and I wish I could afford to buy you books as fast as you can learn them ...

And thus, deceptively sweetly, begins the curious little book by Thomas Bewick: THE HISTORY OF LITTLE KING PIPPIN. With an Account of the Melancholy Death of FOUR NAUGHTY BOYS, WHO WERE Devoured by Wild Beasts. AND THE Wonderful Delivery of Master Harry Harmless, by a little WHITE HORSE . It sold for two pence around about 1810. And, yes, some little boys do get eaten in the story. Worse yet, children and their hungry, hard-toiling parents have to save up their pennies to buy precious books.

Which, rather abruptly we admit, brings us to another tale, the one unfolding last Friday evening on Woodley Island -- far, far from the Kingdom of Pippin -- where a gang of adults bumbled about swilling ale and oysters and raving about a beast with the power to gobble up entire worlds and spit them out onto shimmery screens. They had gathered to eat and drink in the name of raising money to bring free WiFi to the Humboldt County Library system. And though a throwback rock band belted out cheerful throwback tunes, what really captivated the swillers and spenders was a modest little vanful of librarians that had been tootling around Northern California's backwater for two weeks pushing modern-day access to free books .

The nonprofit Internet Archive Bookmobile, along with another nonprofit called TechSoup, had been in the Hoopa Valley earlier that day. They'd parked the bookmobile in a lot, and the people had "flocked to it," said Sarah Washburn of TechSoup, from San Francisco, standing by the bookmobile outside the oysters-and-ale tent on Woodley Island. Next to her, Stanford librarian Shin Joung Yeo, volunteering her vacation time to travel with the Internet Archive Bookmobile, gathered together pages of the first edition of Lewis Carroll's Alice's Adventures in Wonderland (1865), and made them into a real book with a book-binding machine. Fellow traveler/Stanford librarian James Jacobs noted: "We made at least 10 [books] within an hour" out in Hoopa. The kids couldn't get enough.

But, Jacobs said, the book-binding procedure wasn't the thing they were actually pushing on this tour. "We're just binding them as a demonstration, as a way to lure people into the archive," he said.

The Archive is an online library, founded in 1996, of public domain books -- those printed before 1923, or otherwise "orphan books" without copyright -- and other media including audio and visual recordings, old web pages (held in what they call the Wayback machine) and more. Anyone with access to a computer can download items from this online library for free. TechSoup offers free technology support to libraries and other nonprofits, as well as free technology that's been donated or discounted by corporations or others. On the tour, Washburn often ducked inside libraries to discuss technology needs with the librarians.

They'd had a little difficulty with the Bookmobile in Humboldt County -- its satellite Internet connection had gone blinkers, so they couldn't download books. But luckily they'd previously downloaded some books, including Alice , to print. The communication glitch pointed out the key trouble for many boonies-bound libraries such as Hoopa: The wonderful Internet Archive books were just beyond their reach, because they don't have high-speed Internet access. It's another example of the digital divide, said Yeo, that leaves many rural people at a disadvantage because "they're behind the times." Why, they might fail to learn how to navigate one of the most basic procedures of job searching today, she said: the online job application.

Or, they might miss out on the pleasure and necessity of reading many books because they are not available in their small, struggling libraries. As the Internet Archive spells out poignantly on its website (www.archive.org), "Open and free access to literature and other writings has long been considered essential to education and to the maintenance of an open society. Public and philanthropic enterprises have supported it through the ages." But today, poorly funded libraries have fallen behind the times and failed to keep up with preserving old paper-bound works let alone the flood of digital works.

Now, back in the Kingdom of Pippin, the way they solved the access problem was simply, arduously, to save their pennies. Well, that's pretty much how it goes today, too -- those dandy old books are free now, but you gotta have access. More ale! More oysters!