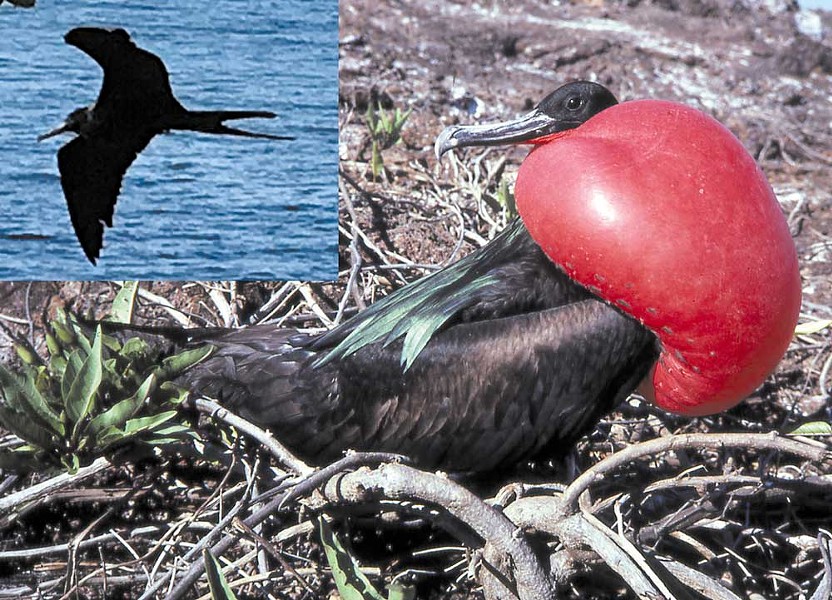 Frigate birds are a surprising study in contrasts. On the one hand, I admire them gliding effortlessly high overhead, following the updraft above a Pacific beach in southern Mexico. On the other hand, here's a male "magnificent" frigate bird on the Galapagos, perched clumsily with his ungainly red gular pouch inflated. It's a chick magnet: The bigger and brighter the pouch, the more likely he is to attract females.

The surprises don't end there. For instance, they're seabirds that can't swim, unlike all other birds that make their living on or by the ocean. That's because their uropygial glands (the ones that produce oil that keeps plumage waterproof) are tiny and almost useless; frigates would get waterlogged if they landed on water. And despite having huge wings — up to 7 feet wing tip to wing tip — and the largest wing-area-to-body-weight ratio of any bird, the bones needed to keep those wings extended are almost non-existent, being air-filled. A frigate bird's bones account for less than 5 percent of its weight. Another fun fact: At night, far from land, each half of the bird's brain takes turns sleeping.

The three most common species of frigate birds are found virtually everywhere across the Earth's tropical and subtropical oceans. Individually, their range is vast, too. Able to soar on warm air currents for weeks on end, they can roam thousands of miles without ever landing. One was tracked by satellite over the Indian Ocean for two months at altitudes up to 12,000 feet. Another flew 2,700 miles from Europa Island in the Mozambique Channel to the Maldive Islands — all without touching down. Of course, they have to land to breed and raise their chicks, a lengthy process (one of the longest of any bird), which is why they only breed every two years, with the female laying a single egg. They're also long-living — one was recorded at over 44 years old.

The secret to their endurance over the oceans is summed up in two words: flying fish. Flying fish deserve a column of their own but suffice it to say that the ability to "fly" — that is, to glide for hundreds of feet over the surface of the water — is their strategy to avoid getting eaten by dolphins or tuna. When frigate birds are around, though, the fish are caught, in the words of naturalist David Attenborough, "between the Devil and the deep blue sea." During flight, flying fish are at the mercy of frigate birds, which snag the fish in mid-air with apparent ease — check "flying fish hunt" on YouTube.

Eating protein-rich flying fish (also squid) is an efficient way for frigates to obtain energy. Their stomach enzymes break down protein into amino acids, which, once more bodily processes have removed the nitrogen, are similar to glucose. Rather than the quick energy release obtained directly from glucose, protein supplies longer-lasting energy, as useful for a bird's weeks-long flight as they are for human marathon runners. Hence protein bars.

Klutzy on land, unable to land on water, frigate birds more than make up for these disadvantages when they're aloft, week after week after week. If you're headed to a Mexican beach soon, remember to look up.