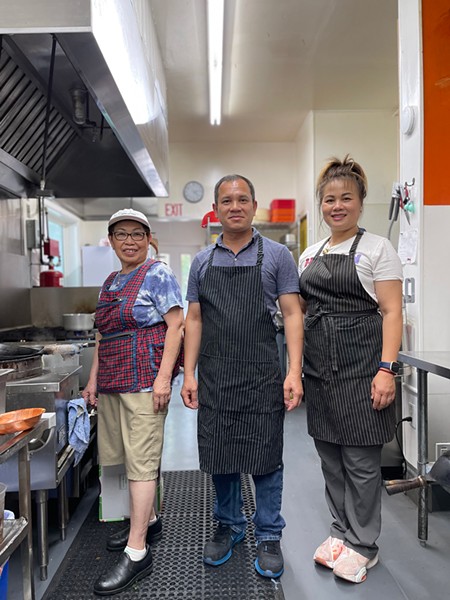 Kim Pravong describes herself as a risk taker. One is inclined to believe her after hearing she took over Lily's Thai Kitchen with only a little experience working for a friend at a restaurant years ago and a couple visits to scope the place out. "If I don't do it, I never know," she says. Pravong jumped in with both feet in May, moving from Eureka to Willow Creek, where Lily's is located (40640 State Route 299).

There's not much of an Asian population in the small, mountain town and Pravong has yet to meet any Southeast Asian residents besides the handful of family members living and working with her. But she says the demand for Thai food in remote Willow Creek and its surrounding area is strong. "Basically, I like to serve the community," she says. "People from Hoopa and Orleans, they come down here." Sometimes she stays a little past the 8 p.m. closing time to accommodate those who've made the long haul for deep ochre Panang curry and soft, transparent spring rolls stuffed with shrimp and lettuce.

Pravong likes the small community in Willow Creek and notes that a number of people she's only just met have offered her help whenever she needs it. She says she's eager to return the favor and has already donated lunch for the teachers at Willow Creek Elementary. "It's really warm and everybody knows everybody ... It's really welcoming here .... They really welcome a new business owner." When Lily Vong opened Lily's in December of 2021, it was a welcome addition in a town of just under 1,300 people, according to the U.S. Census, with limited dining options and no other Asian food.

Like many Lao Americans of her generation, Pravong immigrated to the U.S. in the 1980s, after staying a year or so in a refugee camp in Thailand until she was 10. After her family landed in Des Moines, they moved to Humboldt County, where she grew up before moving around a bit and returning to Eureka. Without formal culinary training, Pravong learned Southeast Asian cooking techniques and recipes from her mother, her in-laws and friends. "I just pick it up from whoever can teach me," she says. "I pick it up really quickly." Most recently, she learned some house recipes for Lily's from Vong, though the Thai fried rice and fried noodles are her own versions. "Really spicy," she says with a little mischief in her laugh. "Some of it is gonna' change," she says, and she's looking at what's popular with customers and what she can improve. "I'm still thinking about it."

Pravong's personal favorites align with some of the most popular items. "I like pad Thai and pad kee mao and red curry. I like all of it — and pineapple fried rice." She takes a minute to rhapsodize about how nice a handmade eggroll is when its freshly stuffed and fried.

The restaurant is still takeout-only, which allows Pravong to maintain a skeleton crew, but there are places for customers to sit and eat outside. So far that model is working for her and she says she's been able to pay her bills and herself with the slim profits. Willow Creek's remoteness presents its own challenges for a Thai restaurant, though. "Ingredient wise, it's really hard." Sometimes when Pravong can't get the spices and specialty ingredients she needs on her regular trips to Eureka, where they sometimes sell out quickly, she has to go to Sacramento or Redding.

Stocking up and taking inventory are Monday tasks, the only day the restaurant is closed, leaving Pravong with no real days off. The rest of the week, she says, she typically pulls 12-hour days, coming in at 9:30 a.m. to start prep work and finishing the nightly cleaning by 9:30 p.m.

.Jennifer Fumiko Cahill (she/her) is the arts and features editor at the Journal. Reach her at 442-1400, extension 320, or jennifer@northcoastjournal.com. Follow her on Twitter @JFumikoCahill.