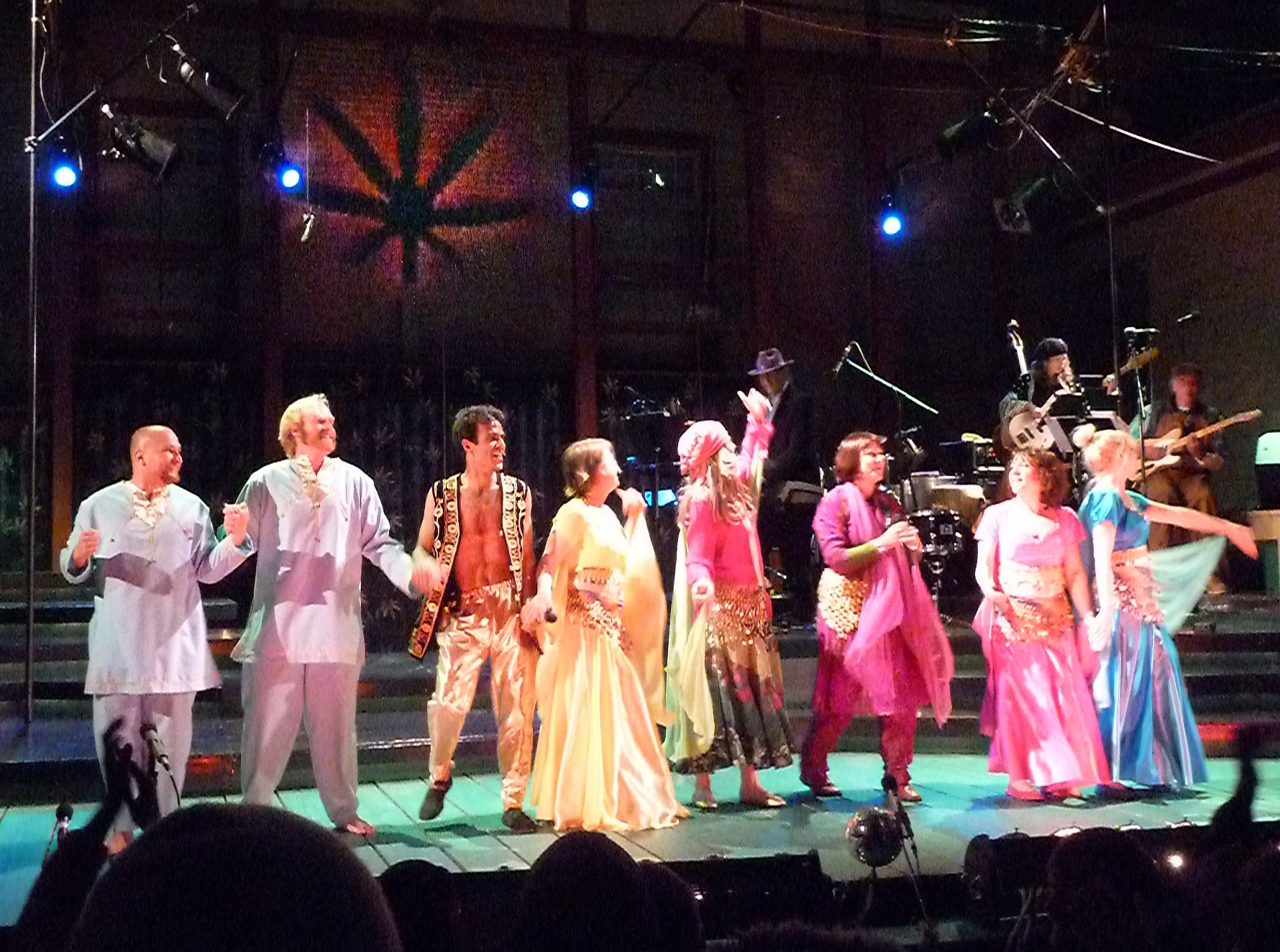 This is the show you have to see this summer. No excuses. Get on the phone. Go online. Get out the debit card. Reserve three or four tickets. You will have friends who will want to see it, too, but aren't on it like you are. They'll love you for it.

Mary Jane, played by an earthy, raspy Joan Schirle, is Queen of the Emerald Ball, Diva of Sativa, Empress Kush. Through song, dance and dialogue, she leads an extraordinarily talented cast in telling the tale of marijuana's coming of age. The story looks at its days as a way to fund alternate lifestyles in the late '60s, until the bucks got bigger and greed began sullying its counter-culture spring, and finally its potential legalization and looming corporate takeover.

When director Michael Fields wanted to do a show about marijuana, he invited local songwriters to write about the big cash crop of our collective neighborhood. Lyrics covered diverse takes on different aspects of the growing culture in a cavalcade of musical styles, ranging from blues to reggae to show tunes. A hot live band performs all the music: Tim Randles, Marla Joy, Mike LaBolle and David Perez rock. Fields is working with a European form, concert performance, where music and dance drive the invention of characters and storyline. Once Fields had the songs, he started developing characters and dialogue. It was up to choreographer Laura Muñoz to create ensemble dances that would make the show click -- and move.

Choreographing proscenium-staged, blockbuster numbers was a stretch for Muñoz. There is an organic thread throughout her personal work that borders on minimalist, the opposite of brassy, loud and showy. Being asked to choreograph several dance numbers would be daunting even for a musical theater pro. Our girl totally nailed it with a brilliant fusion of popular archetypal and artistically substantial work.

The dances in MJ are genre-based, with nods to MTV, Broadway and movie musicals, Las Vegas revues and back-up dancers in Motown groups. Imagine trying to come up with a Supremes routine; seems easy enough, you've been practicing as Diana Ross' back-up in the mirror since kindergarten. An ABA, verse-chorus-verse song structure and not too many moves, a lot of repetition. No sweat. But, wait a sec -- for a style to be imitated it has to be established, rooted in rhythmic patterns and nuances that the imitator truly understands. For the many musical genres in MJ, Muñoz first had to delve into the root of several popular styles of dance. Next, to get beyond imitation, she had to tweak each genre with her own stuff to make it fresh and meaningful for right now -- and Muñoz rocked it. So do the dancers, who physically understand (with their moving bodies), each genre and the edge she has layered into the whole shebang.

At rehearsal in Blue Lake last week, Muñoz directed a run-through of The Industry, a metal song by Scott Menzies with lyrics exposing the dark underbelly of the pot business. During a break she talked about the choreography process, admitting, "I don't like heavy metal at all. I went with it." It being head-banging, hair-throwing, physically aggressive choreography that allows the characters to fully realize their dark side.

Next Muñoz worked with the cast on a new number, This Bud's For You, also by Menzies. Like the title implies, it's an ingenious show tune weaving in familiar jingles, "I'd like to give the world a toke ..." in a not-too-far-off fantasy world advertising the corporate branding of pot post-legalization. Muñoz guided cast members as they worked with a recorded version of the song, giving corrections as the dancers chimed in with their solutions to on-stage traffic jams and timing issues.

And OMG! Bollywood! When the cast came out last summer and performed Nuggy, Nuggy, Nuggy (yes, folks, you read that right), I almost fell out of my chair. This number emulates a cast of hundreds hanging from balcony railings. How did she do it? Pratik Motwani, who plays Ravi, is from India. He helped. Beyond that, she said, "I open myself. I watched a couple of Bollywood movies. ... I feel shameless. I attack any style and act like I know it."

"Laura is a perfect fit," said Fields. "She's worked with these guys before. She's made it work for all these bodies." He believes dance unifies things. "The activity of unity comes out of the movement ... the ways bodies move with each other in space, more than any virtuosic dance movement. It's the ensemble that makes it accessible."

We all move. We all have the instrument. We can relate. A committed ensemble is the mainstay of physical theater. This group moves seamlessly from one scene to the next, supporting each other's characters throughout. It's provocative, entertaining and deliciously satisfying to experience such engaging performers, in work that is commentary on where we all live.

We are often reminded of how lucky we are to have Dell'Arte churning out remarkable stuff for us to see year after year in our very rural, out of the way backyard. Most important, Dell'Arte gives us "Theatre of Place." Much of its work is about here, Humboldt, the Redwoods, California. The company produces work wrought of our immediate physical and emotional landscape, strengthening our sense of community and bringing to the surface a psychic identity, helping us define ourselves as a group of humans sharing a small space on the planet. Way cool.

Outdoors as the dusk drops, the stars shine overhead, a musical about weed and Humboldt County, for heaven's sake see it. The Dell'Arte Company presents Mary Jane: The Musical 2012, Thursdays through Sundays, June 21 through July 8. Tickets: $18, $15 for student and seniors, $10 for under 12, online at dellarte.com, or from the box office, 707-668-5663.