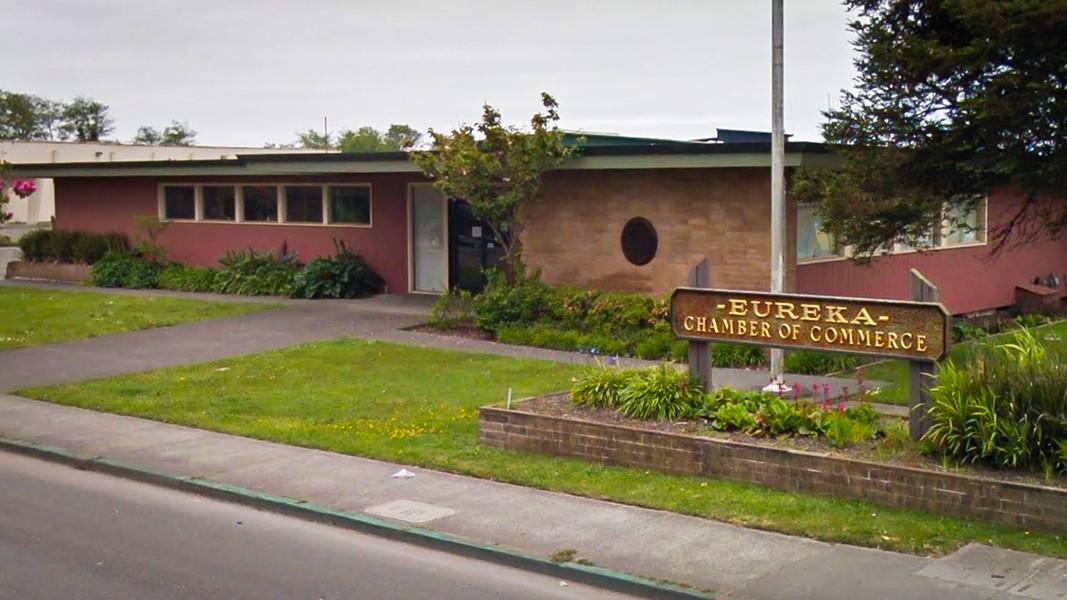 The former Eureka Chamber of Commerce building and its surrounding property are slated to become the site of a new "upscale" 83-room hotel after the city council voted unanimously last week to accept a $435,000 bid for the parcel.

The project by SJN Hospitality — which built the Holiday Inn Express & Suites in Eureka a few years ago — was recommended by staff over a proposal by Alcohol Drug Care Services to use the current structure for a 16-bed crisis and sobering center.

The single-story, 1950s-era building located on 1 acre that sits at the corner of Broadway and Hawthorne Street served as the chamber's headquarters for decades, but last year the business organization asked to be let out of its long-term lease after the city discontinued its contract with the chamber to run a visitors center at the site.

While the city owns the property, the chamber paid for the construction and maintenance of the building under a 1957 agreement that had ownership reverting to the city in 2033, when the chamber's lease was slated to end.

Last summer, the council agreed to pay the chamber $100,000 as "compensation" for the remainder of the lease and allow the chamber to move and create a business incubator facility in the downtown area. That, in turn, allows the city to sell the property outright.

In February, a request for proposals was circulated for the property resulting in two responses: the hotel development and the treatment center.

Rob Holmlund, the city's director of developmental services, says the SJN project was the one that most closely aligned with the RFP requisites, which included the ability to "purchase and develop the property beyond its existing condition," and generate tax revenue.

Noting that the city is working to find another location for the treatment center proposed by ADCS, which currently runs the 56-bed Waterfront Recovery Services treatment program at the former Multiple Assistance Center and oversees 39 units of transitional housing at the Serenity Inn, Holmlund says funding has not been secured for the operations of the proposed project, and ADCS wasn't looking to purchase the property or pay a lease.

Holmlund tells the Journal the hotel option is the "best fiscal opportunity for the city, as well as for doing aesthetic improvements" along the busy main street.

In the General Plan update, the Broadway corridor "is envisioned to increase in density with taller buildings, and become a beautiful and well-coordinated entry-way into the City and a key retail and service-commercial corridor."

According to SJN Hospitality's proposal, the developer has a purchase agreement for a property behind the Broadway site and plans to build a four-story hotel on the combined 29,000-square-foot lot that would generate "millions of dollars in TOT over the life of the property," referring to the transitory occupancy tax levied on hotel rooms.

"The public benefit of the development is plentiful. A significant beautification of Broadway will occur with the addition of the project," the proposal to the city states. "Local residents along with their family and friends will have the opportunity to stay in a modern upscale hotel within Eureka during holidays, events and weddings occurring throughout the year."

While the city redacted SJN's projections on how much the take would be on an annual basis contained in documents provided to the Journal — deeming it "proprietary" information — a 2018 economic analysis looking at development options for the waterfront lots between C and F streets gives some indication of possible numbers.

The report looked at three scenarios that included the potential of a mid-to-upscale, 100-room hotel and estimated such a development would generate around $430,000 a year in TOT.

Also addressed in the report was the impact a new hotel would have on existing establishments, a question raised at the May 7 meeting by Councilmember Leslie Castellano, who asked whether the development proposed for the former chamber site would "compromise established hotels."

Holmlund replied that he didn't "predict that this would be a problem" and that "occupancy is healthy, it's good."

When Councilmember Natalie Arroyo noted she had heard indications that the hotel would be more of a long-term stay option for travelling professionals, Holmlund said the developer is interested in that type of facility. This could impact the TOT revenue potential for the project, as the tax can only be levied for the first 30 days of a person's hotel stay.

According to the waterfront economic analysis, SJN's Holiday Inn Express & Suites was the first new hotel on the Eureka scene in 15 years and the addition of 100 rooms was absorbed without resulting in "a decline in overall occupancy or average room rates" at other similarly situated establishments.

Using data compiled by a lodging analytics firm, the report states that there are around 680 mid-to-upper-mid class hotel rooms in Eureka but notes that not all establishments were accounted for. Most of those missing from the count did not fit into the same classification, with many of the 400 or so other rooms in the city "in use as more permanent housing rather than being available for overnight lodging."

The analysis also notes that another new mid-to-upper scale hotel — such as the one proposed for the Broadway property — would likely result in a similar situation, but any more than that could saturate the market, resulting in a negative impact.

"With only modest growth in area population and employment anticipated in the coming years, new hotel room demand would largely have to come from expanding the number of tourists attracted to the local area," the report states. "It is likely that the level of tourism attraction that would be necessary to support 29 to 44 percent growth in local room demand would require a concerted long-term promotion effort.

"Given these factors, while there may be market potential for one upscale hotel in Eureka, this may be the limit to what can be supported by demand, at least in the near term," it continues, going on to state that a "cautious approach would be to delay the development of more than one hotel, with further market evaluation after the first hotel has been in operation for a period of one or more years."

The city is, in fact, looking at a new promotion effort — and a new promotor — after deciding in February to take the $370,000 allotted for marketing each year out to bid, ending its decades-long funding relationship with the Eureka-Humboldt Visitors Bureau.

Much like the chamber's exit from serving as the city's outreach arm to tourists, for decades the bureau had provided marketing services for the city with an approach that focused heavily on the region's redwood trees as a global draw.

"Staff proposes that Eureka deliberately and strategically shift its funding and destination marketing efforts toward a marketing strategy that concentrates specifically on Eureka while simultaneously expanding the target audience to include local/regional residents and the local business community," a February staff report on the issue states. "A primary mission of the city's new strategy is to promote the city of Eureka not only as a desirable destination but also an amazing place to live."

While the bureau submitted a proposal, it did not make the list of three finalists selected by staff to provide the city's marketing services that was released last month, which included Eddy Alexander of Roanoke, Virginia, Humboldt Made of Eureka and MC2 Design Group, of Chico.

A final recommendation from a review panel, made up of "city staff and local business representatives," is slated to go before the council May 21.