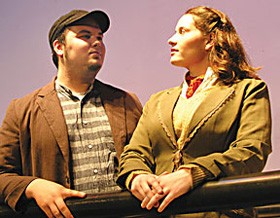 When the basic story is so familiar, and the narrative trajectory so extravagantly simple (big unsinkable ship sinks on maiden voyage), it all depends on how it’s done. The Humboldt Light Opera Company does the musical Titanic very, very well. The production excels in every aspect, creating a stylish, polished, harmonized and entertaining whole, with moments of unexpected emotion.

It’s a treat to be able to appreciate the skillful and artful execution of the show’s many elements, but the confidence that the production creates allows you to relax into the illusion and feel the emotion.

And it doesn’t depend on flashy, overwhelming technical achievements. You aren’t going to see a giant ship sinking. Though there’s a single, small tilting room in the second act, the most dramatic special effect is the well-timed skittering of a single tea cart.

Yet the sets and lighting (designed by Jayson Mohatt and Justin Takata) are sumptuous in their way, as well as elegant and eloquent, etching the scenes into memory. Kevin Sharkey’s costumes are ravishing. Director Carol McWhorter Ryder focuses on sets of characters, then fills the large Van Duzer stage with movement (and Sarah Carlton’s choreography.) The singing (as is often the case in an HLOC production) is superior. Above all, there is the orchestra: What a delight to have a full orchestra for a musical, and this one, under the direction of Justin Sousa, impeccably plays an evocative score.

The Titanic , the largest and most lavish passenger ship of its time, steamed out of England on its first and last voyage in April 1912. There were three classes of service for passengers: from first class for the wealthy and renowned, such as John Jacob Astor and his young wife, to third class for poor immigrants bound for America. One of the better moves in the musical’s script (by Peter Stone) is to focus early on a couple in second class — a middle-class Midwestern businessman (Edgar Beane, played by Gene Lodes) and his star-struck wife (Alice, played by Elisabeth Harrington). Since Alice is so curious about the celebrities in first class she provides easy exposition, but with an endearing comic performance and a wonderful voice, Elisabeth Harrington goes beyond this simple expediency to establish the Beanes as the audience’s representatives, as well as a couple whose fate will matter.

We soon see the glamour of first class for ourselves in a dinner scene that literally glitters with sequined gowns and jewels, as characters are deftly introduced. Then there’s another large ensemble scene in third class which is unexpectedly affecting. The Irish émigrés could be living clichés (the burly young fisherman, played by Tristin Roberts, the three young ladies named Kate, played by Laura Hathaway, Krissy Dodge and Essie Bertain), but first with a trio sung by the Kates, and then in a powerful ensemble, they generate real emotion. Perhaps it evokes images of immigrant forebearers (though my grandparents and mother came over from Italy on ships much less majestic than this, where there were a handful in first class and thousands in steerage). But it’s the actors and their singing that really put it over, particularly the radiant Laura Hathaway.

The script probably tries to do too much — there are so many themes and so many characters (based on real passengers) that little gets developed even cursorily. Phil Zastrow as the ship’s owner (and villain of the piece), Kevin Sharkey as its designer and Bill Ryder as the Captain all perform their fairly thankless roles well, but it’s the “minor” characters who stand out: Cailan Halliday as the quartermaster, for instance, and Kevin Richards as the chief coal stoker, and particularly Jordan Matteoli as Radioman Harold Bride. Matteoli seems born to play young (and usually innocent) characters in musicals set between 1910 and 1950. He gets an especially poignant song near the end. Though there are slack stretches and foreshortened stories, the emotion built into the situation — the lives lost, the survivors, how everyone behaved — comes through, thanks to the production and these characters.

I confess I couldn’t imagine song lyrics about the sinking of the Titanic . (The best I could come up with were: MRS. ASTOR: The ship is sinking! MR. ASTOR: Have you been drinking? It’s unthinkable! The ship’s unsinkable! CAPTAIN: Mr. Astor! It’s a disaster!) Not to mention finding a rhyme for “iceberg.” But this musical is more in the operetta style, with most of the dialog sung rather than spoken. Though serviceable and even witty in context, with few exceptions neither lyrics nor songs (both by Maury Yeston) are especially memorable. Perhaps that’s partly why this Tony Award-winning Broadway hit of a decade ago is so little known. But for the length of the show, it hardly matters.

And there are other oddities about the script, such as the Captain about to go down with the ship suddenly reflecting that in 43 years at sea, he’s never seen an accident. It sounds like an insert demanded by the cruise ship industry. But as a whole, the excellence of the Humboldt Light Opera production overwhelms these weaknesses. Maybe the ship sank, but this Titanic is buoyant.

With their final shows of this season now playing ( The Nerd and The Sound of Music, respectively), both North Coast Rep and Ferndale Rep have announced their next season. Beginning in September, NCRT Artistic Director Michael Thomas has two modern classics: Jean Giraudoux’s The Madwoman of Chaillot and Marat/ Sade by Peter Weiss. The holiday musical will be Fiddler on the Roof, the spring musical will be Little Shop of Horrors, the Shakespeare between them will be the comedy All’s Well That Ends Well . And next summer’s comedy will be Lend Me a Tenor, the 1989 Tony Award winner by Ken Ludwig.

As announced by Artistic Director Marilyn McCormick, Ferndale Rep will host several showcases in September and October (including Jeff DeMark’s Hard As A Diamond, Soft As The Dirt , and a multimedia show by the L.A. based Camera Shrapnel) before its first production in November, an adaptation of E.B. White’s Charlotte’s Web , followed by the courtroom drama Twelve Angry Men and an all-teen production about school violence called Bang Bang You’re Dead . The spring musical is Hair , the summer musical is Godspell , with a stage adaptation of the film classic Rashomon between.

*To extend the theatrical conversation and expand it beyond the North Coast,William Kowinsky started a Stage Matters blog, at stagematters.blogspot.com . You can alsoe-mail him at stagematters@sbcglobal.net.*